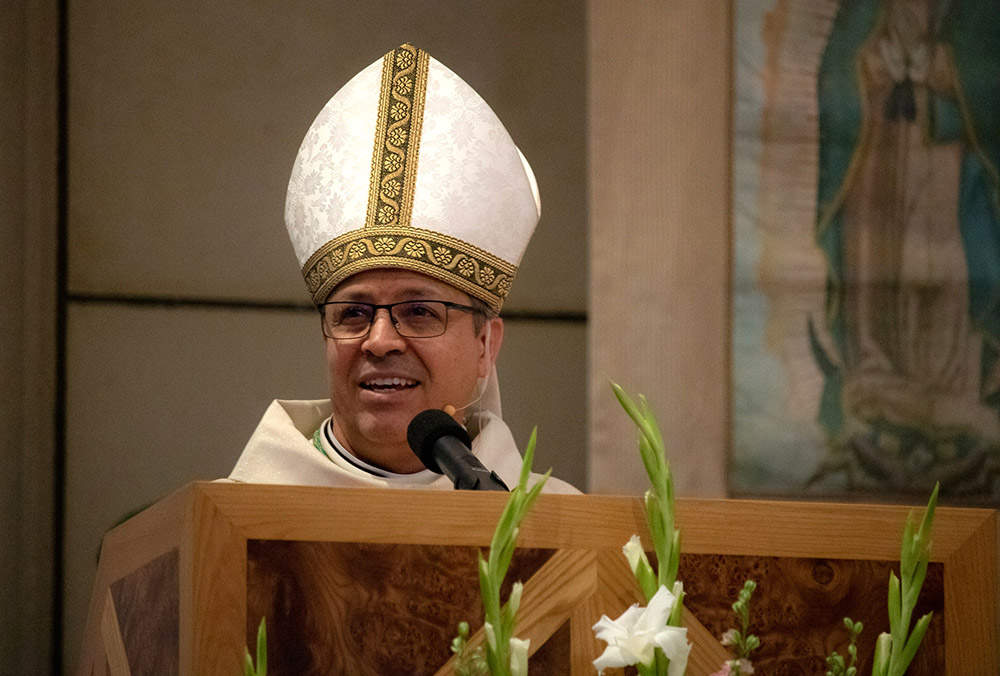 Bishop Alberto Rojas delivers the homily during a Mass of welcome at St. Paul the Apostle Church in San Bernardino, California, Feb. 24, 2020. (CNS/Courtesy of the San Bernardino Diocese)

Rojas was first a Chicago priest and then an auxiliary bishop in Chicago. Two years ago, he was named the bishop of San Bernardino, where he says he has been trying to learn in service, which was difficult during the pandemic. But, he's glad to say, "we have been innovative."

NCR was able to chat with Rojas following a day of immigration advocacy on the Hill and discuss some of the conference's themes.

NCR: What does Hispanic ministry in your diocese look like at this moment?

Rojas: Everything is Hispanic ministry. Every parish is bilingual. The diocese is at least 70% Hispanic. There's no parish where Spanish is not needed. It's probably one of the most diverse dioceses in the country. It has a large population and continues to grow. The bishop before me who retired told me that in the last 10 years the diocese has doubled in size, which means almost a million Catholics.

It's very beautiful at the same time because there are a lot of people who are committed to their faith. Churches are full, even now, after the pandemic. They're coming back.

How did the pandemic impact Hispanic ministry?

When we decided to close the churches, a lot of people were so sad. We got all kinds of angry letters, saying that they expect many things to close but not the church because that was when they needed it the most. We understood that very well. But at the same time, we didn't want to put them at risk and a lot of people didn't understand that — even imposing or suggesting very strongly to not receive Communion in the mouth or to not shake hands or to use the mask.

This is why sometimes it's so hard with a lot of people: They think if it is about God, you're not going to get sick. Many times, I tried to explain, yes, God will protect you, but that God also gave you intelligence.

Many people have gotten used to watching Mass online. Some are afraid of coming back. But a lot of them are back. With the vaccines and all that, a lot of people have been less fearful.

The fear is the worst part. I've said it many times, this is dangerous, and we need to be careful, but I hope your fear is not worse than the pandemic. Even if the pandemic or virus are not going to go away, at least we know how to deal with it.

How has it felt to be at the conference?

Advocacy with immigration is just one component. But there are a lot more [issues] like these in this Congress. The focus is going to be now on young people as one of the priorities. The other one is family, and another is social justice.

I brought around 10 people from the San Bernardino Diocese, most of them are young, and they're all involved with different ministries — some with young adults, immigration and pro-life. The congresses are very important for us because this is when we get empowered and encouraged.

Hopefully, we'll continue to meet and find some hope in strength for our people — for immigrants, the extended community and other communities as well.

Read this next: 'Pay attention and do something': Gathering urges investment in Hispanic ministry