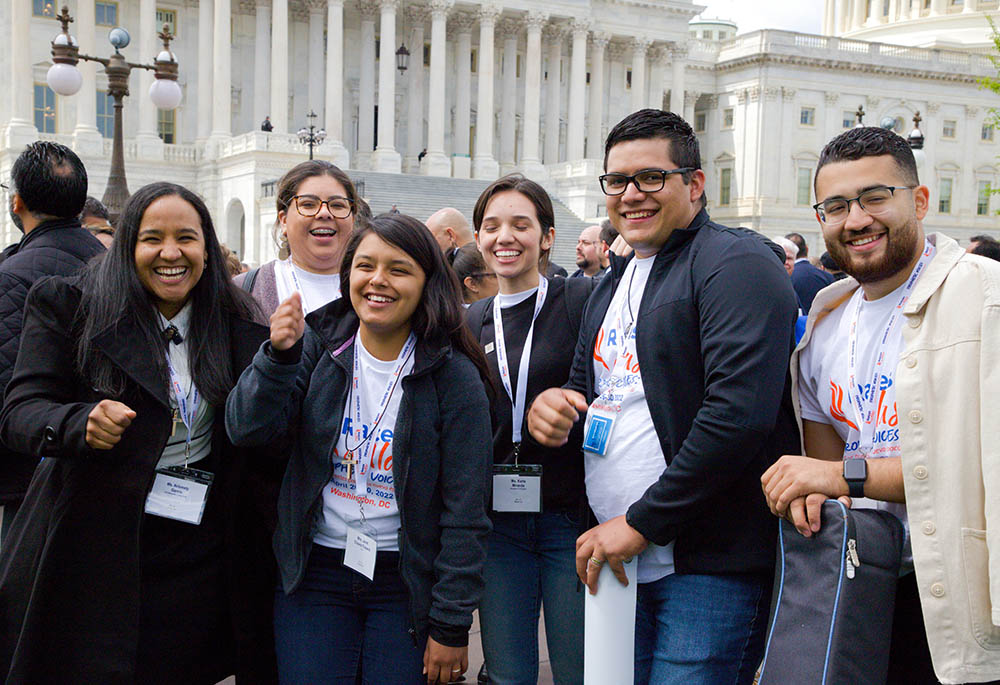 A number of metaphors came to life in the five days that the National Catholic Council for Hispanic Ministry gathered in Washington, D.C., where 400 participants focused on social justice, young adults, families, and pastoral formation for Hispanic Catholics, who are on track to become the majority of the U.S. church.

The driving image of the April 26-30 gathering was the conference's theme, "Raíces y Alas" — "Roots and Wings" — anchoring most speeches and conversations in celebration of the council's 30th anniversary. The focus on roots conjured respect for tradition and history, with regard to both the Catholic church and one's heritage, while the wings imagery emphasized a progressive need to go beyond the church walls and embrace a changing future, a nod to the 90 young adults in attendance.

But the opening keynote speech by Mar Muñoz Visoso offered an analogy that left a lasting impression on attendees, that the Hispanic Catholic leaders in attendance, representing 70 dioceses around the country, ought to think of themselves as bridges.

And not just a bridge for Hispanic Catholics in the U.S. who need formation and resources to fortify their ties with the church, but also as a bridge that connects the country's undocumented immigrants with the politicians poised to address their plight — a metaphoric bridge made manifest on the conference's advocacy day, April 27, in which attendees lobbied for immigration reform at the U.S. Capitol. 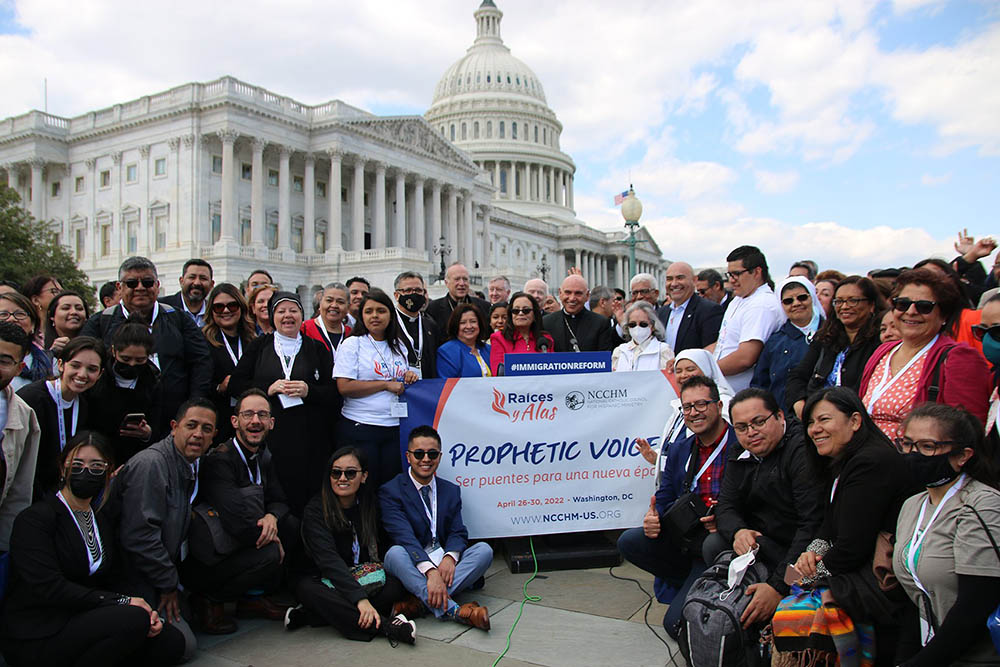 Participants of the Raíces y Alas gathering are seen near the U.S. Capitol in Washington April 27. (CNS/Martin Soros via USCCB)

Though some bridges are for connecting, others need to be crossed, said Muñoz Visoso, executive director of the cultural diversity committee for the U.S. Conference of Catholic Bishops.

"It is time to leave behind intolerance and division, demonization of the other, mistrust, machismo, clericalismo, malinchismo, jealousy; time to leave behind the lack of appreciation of ourselves, our history and our values, and the gifts God has given us as individuals and as a people; the lack of appreciation and understanding for the gift of unity in diversity, our call to be prophetic voices."

"New times demand new measures, ingenuity, intuition and boldness," Muñoz Visoso said in closing her speech delivered in Spanglish. "How can we Hispanic/Latino Catholics be the bridges that this new era demands? How can we help the church in the United States to rediscover synodality as her modus vivendi et operandi?"

'Our work here is not political'

Elisabeth Román, president of the National Catholic Council for Hispanic Ministry, said the focus on families, formation, youth and social justice was a distillation of the 28 priorities that Hispanic Catholics around the country have expressed in the last two and a half years, a result of the V Encuentro process that engaged this demographic at an ongoing grassroots level.

Addressing social justice needs — namely, calling for immigration reform on behalf of the undocumented immigrants that council participants know and minister to in their parishes — the group took to the U.S. Capitol to lobby to Congress April 27. Following a bipartisan press conference to call attention to the urgency of this issue, council delegates held both in-person and virtual meetings with senators from their 38 states. (Catholic Relief Services staff prepared the participants for these meetings.) 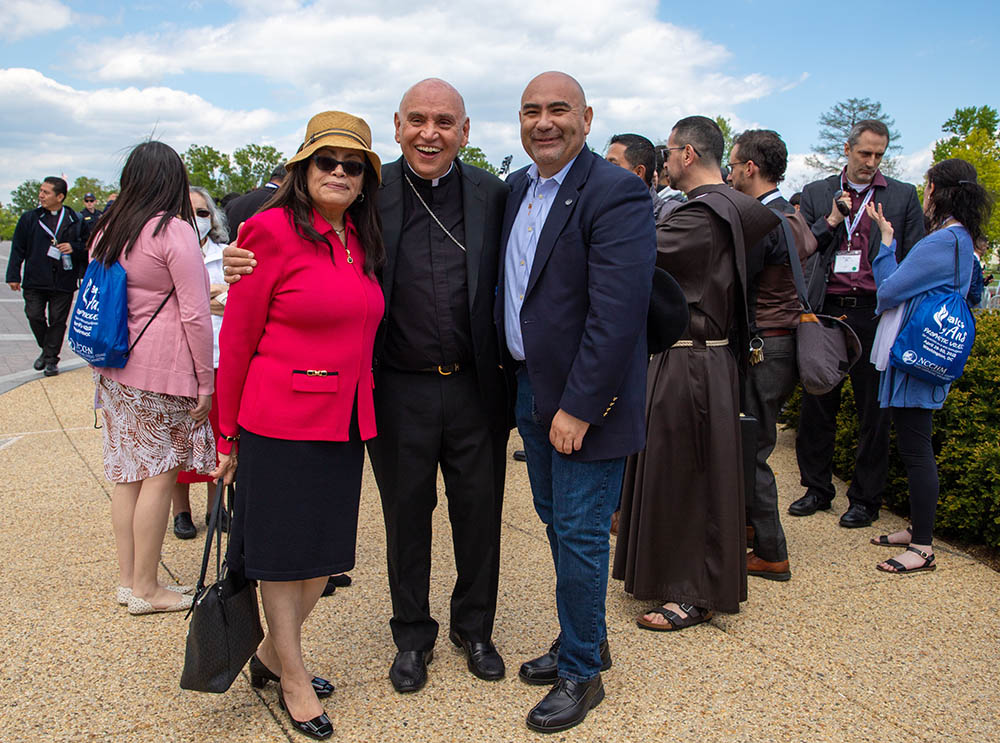 "While we might have come to the center of our nation's political life, our work here today is not political, nor is it partisan," Dorsonville said. "We come in prayer to ask members of Congress, Republicans and Democrats, to work together to create solutions we all long to see. We bring with us stories of hope, fear, loss and longing, but also a single unified message, which is immigration reform cannot wait any longer."

The group was specifically advocating for the passage of the Farm Workforce Modernization Act, as well as the American Dream and Promise Act, both of which have bipartisan support and are awaiting passage in the Senate.

Román told NCR that this lobby effort was the reason they decided to host the conference in the nation's capital. "We're not going there as partisan politics; we're going there as people of God who are called to advocate for social justice, because we're clear that there are Catholics on both sides of the aisle." (Román is an NCR board member.)

Speaking on behalf of the Holy See, Emilce Cuda, the secretary of the Pontifical Commission for Latin America, emphasized that the immigration issue is "structural," citing Pope Francis' encyclical Fratelli Tutti as she advocated for mercy as a form of justice. 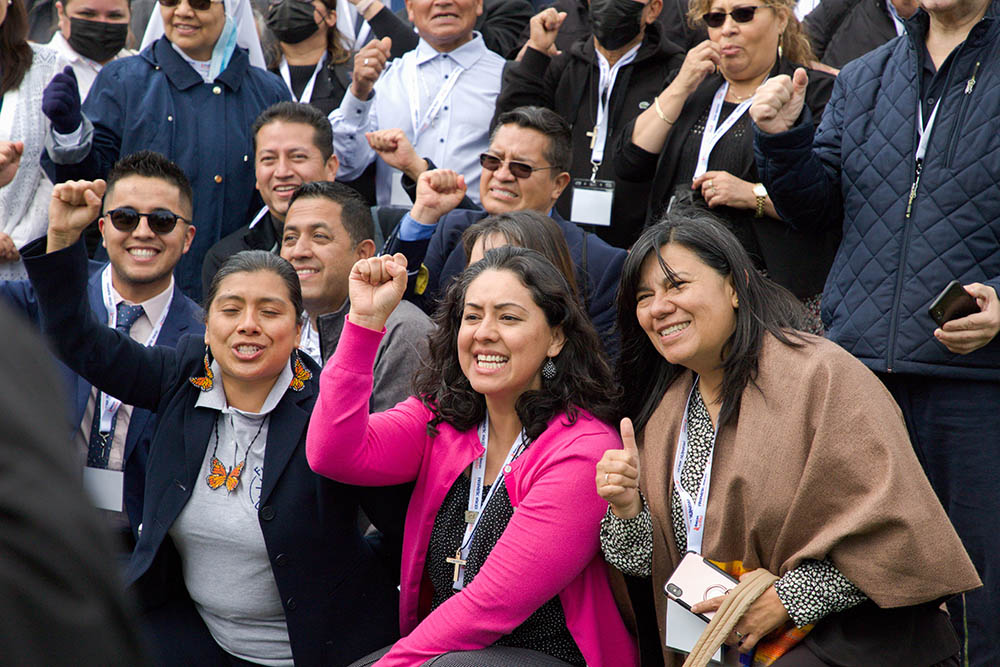 Cuda, a theologian who specializes in Catholic social teaching, highlighted the rights of "informal workers," a term she considers a misnomer, and their need for social and legal protection. "Social rights are not possible if we do not first guarantee civil rights," she said.

But the ultimate challenge, she continued, is to create a reality in which migrants are not forced to leave their home countries at all, she said. Doing so would require an economic collaboration between the north and south.

Back at the conference, a number of prominent U.S. and Latin American bishops, Catholic leaders and Vatican delegates in attendance all demonstrated enthusiastic support for the necessity of a thriving Hispanic ministry in the U.S., though several attendees said that this did not necessarily translate to concrete support that Hispanic ministers receive back home.

In conversations with NCR, several pastors and youth ministers said their biggest challenge is a lack of resources that would allow them to reach these Catholics effectively, or budgets that communicate this area is indeed a priority of the church.

Fr. Francisco Honorato Garnica from the Cleveland Diocese said he decided to attend this conference largely to obtain bilingual Catholic material that isn't available elsewhere. "Sometimes we have to go to California to get books and resources," he said, adding that his parish's Hispanic ministry is small, despite the Sagrada Familia Parish being "the only totally Hispanic church in Cleveland."

Several pastors and youth ministers said their biggest challenge is a lack of resources that would allow them to reach these Catholics effectively, or budgets that communicate this area is indeed a priority of the church.

For Antonio Guzman-Diaz, the Hispanic ministry coordinator for the Detroit Diocese, he feels "like a soldier who's sent to war. If you send to battle without equipment, he'll die immediately, and that's sometimes how we feel. They send us into ministry but they don't provide the budget, the resources, and we cannot do miracles," particularly as their challenges include language and cultural barriers.

And while Hispanics are a growing majority among U.S. Catholics, Hispanic youth and young adults mirror Anglos in the rates at which they leave Catholicism.

Guzman-Diaz, who works in young adult ministry, told NCR he thinks this is because "they see the church does not care for them. ... When they are asked to do ministry but they don't have the budget or resources to do it, they get discouraged, or even go to a different denomination or even leave the church."

Church leadership should be a reflection of how much it values young people, he added. "We need the experience of the adults and the new ideas that young people are bringing to the church. ... You have to be intentional with including them. The church needs to pay attention and do something." 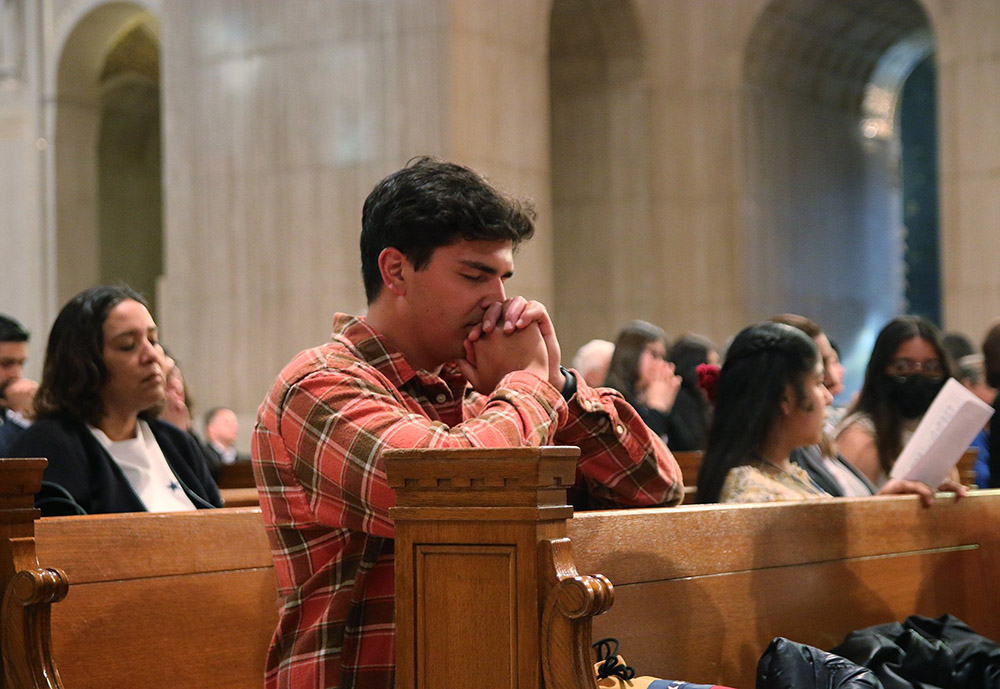 Participants of the Raíces y Alas gathering are seen during Mass at the Basilica of the National Shrine of the Immaculate Conception in Washington April 27. (CNS/Martin Soros via USCCB)

'They leave for one reason'

At 18 years old, Martin Soros drove this same point home for the conference, with a particular eye to the bishops in attendance.

Soros, an Argentine American with the Schoenstatt Movement, was the first-time recipient of the National Catholic Council for Hispanic Ministry's Homenaje Alas award. Alejandro Aguilera-Titus was the first to receive the council's Homenaje Raices award for his work as the national director of the V Encuentro and the U.S. bishops' office for Hispanic/Latino affairs.

While Aguilera-Titus reflected on 40 years of roots deepening in this country as an immigrant, Soros spoke as a representative of a new generation of Catholics, offering an explanation for the disillusionment young people feel toward the church.

Whether they leave religion because they no longer believe in church teaching, or dislike the church's stance on LGBT issues, or because of the clergy sex abuse scandal, "these reasons are not superficial," Soros said.

"They leave for one reason: relationships. If those young people had a strong faith, a strong relationship with Jesus, they wouldn't leave the church. These reasons aren't the causes, they just facilitate their leaving," he said. "Just because someone knows about theology or philosophy or sociology, or knows how to analyze statistics, doesn't mean you understand why young people are leaving; that's why you need to listen."

And while young people leave the church en masse, "we're debating which politician can receive Communion," Soros said. This disconnect from reality is like a boat caught in the middle of a hurricane, with its captains spending time calculating the force of the winds, he said.

Pulling up headlines from national media — "Catholic bishops avoid confrontation with Biden over Communion," for example — Soros asked the room to imagine a young person with little to no relationship with the church reading that. "They'd think that bishops are in the clouds debating theology and don't care about what's going on in my life, my experiences, my challenges. And how can they give me guidance if that's the case?"

While traditionalists enter the church and lock the doors behind them, or progressives go into the streets while locking the church doors on their way out, "we know that the solution is to integrate both," he said, reinvigorating the theme of raíces y alas, roots and wings, with an emphasis on "and."

"I hope that when we look at a young person, we see that they are possibly in danger of leaving the church, and that's why each smile, each look, each question, each acknowledgement that you exist and I see you, and the church loves you and wants to see you here, is so important and fundamental," Soros said.

He closed by quoting Francis' encyclical Evangelii Gaudium: "I prefer a church that is bruised, hurting and dirty because it has been out on the streets, rather than a church that is unhealthy from being confined and from clinging to its own security."

"May these words be etched onto every parish, every office, every home, and especially every heart," Soros said to a standing ovation.

Román took the stage after Soros' talk, saying she had been moved to tears.

Read this next: 'Everything is Hispanic ministry': An interview with Bishop Alberto Rojas
A version of this story appeared in the May 13-26, 2022 print issue under the headline: Gathering urges investment in Hispanic ministry.