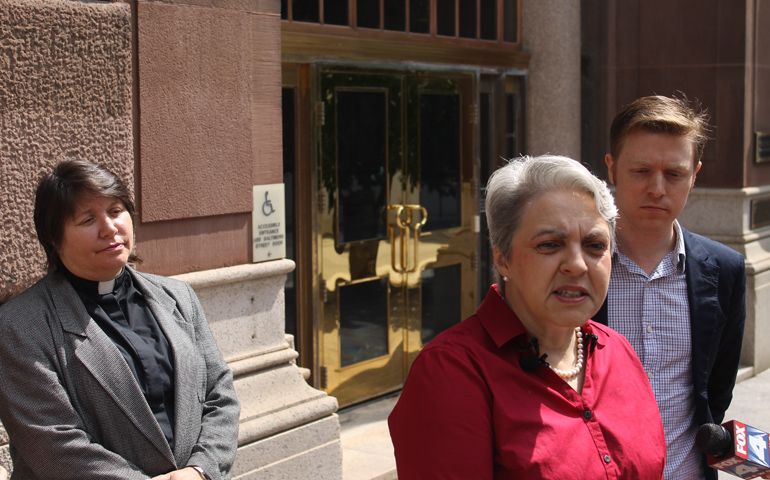 Colleen Simon addresses the media about her lawsuit at a press conference Thursday outside the chancery offices of the Kansas City-St. Joseph, Mo., diocese. Also pictured are her lawyer, E.E. Keenan, right, and her wife, the Rev. Donna Simon. (NCR Photo/Brian Roewe)

Kansas City, Mo. — A woman fired from her job as a food pantry coordinator for an area parish after a local newspaper inadvertently made public her same-sex marriage has filed a lawsuit against the Kansas City-St. Joseph, Mo., diocese and its bishop.

A lawyer for Colleen Simon filed a petition Thursday morning in Jackson County Circuit Court against the diocese and Bishop Robert Finn for fraudulent inducement and violation of Missouri's service letter law, which allows employees to request a letter detailing employment history, including the reason for dismissal.

The lawsuit argues that the diocese hired Simon aware of her sexual orientation and marital status, that she was assured multiple times her marriage would not be a hindrance to employment, and that the diocese's representation proved false, as it cited her relationship as cause for termination.

Neither the parish, St. Francis Xavier Church, nor its two pastors during Simon's tenure are named in the petition, which seeks monetary compensation for lost wages and other damages, as well as Simon's return as pastoral associate for justice and life. The parish has since hired a replacement.

"I would rather not be in this position in any way, shape or form, but they really haven't left me a whole lot of alternatives," Simon told NCR Wednesday. "What I'd really like to do is go back to work."

"That's still what she really hopes for as a resolution to this," said her lawyer, E.E. Keenan.

"She's made that clear, and unfortunately, the diocese has not offered to do that and has not responded to her desire to find a private solution and reconciliation in this solution."

Keenan said he was last in touch with the diocese several weeks ago.

The lawsuit quotes from a service letter the diocese sent to Simon that said her termination "was based upon an irreconcilable conflict between the laws, discipline, and teaching of the Catholic Church and your relationship -- formalized by an act of marriage in Iowa -- to a person of the same sex. Such conduct contradicts Church laws, discipline, and teaching and the diocesan Policy on Ethics and Integrity in Ministry."

Jack Smith, communications director, said in an emailed statement to NCR that the diocese has not seen the filing and cannot comment at this time. "In general, as a Church we have the right to live and operate according to our faith and Church teachings. ... However it is our sincere hope that the matter can be resolved amicably," he said.

In its 2012 Hosanna-Tabor case, the U.S. Supreme Court upheld a "ministerial exception" to job discrimination lawsuits brought by employees of a church it considers ministers of its faith. Keenan told NCR he did not believe that case applied to the claims brought in Simon's petition.

Simon was fired May 14, two weeks after she appeared among more than a dozen others in a an extensive story in the Kansas City Star's 816 Magazine spotlighting revitalization efforts by various businesses, community groups and churches along Troost Avenue, a historical dividing line in the city on which St. Francis Xavier, a Jesuit parish, sits.

The story featured Simon's work in the parish food pantry and, separately, the work of her spouse, the Rev. Donna Simon of St. Mark Hope and Peace Lutheran Church, also situated along Troost. Buried in the 79th paragraph, the story mentions Colleen's and Donna's marriage; so does a caption for a photo of Colleen Simon in the food pantry.

The couple married May 19, 2012, in Iowa after meeting in 2010 at a community organizing conference in Pennsylvania. At the time, Colleen Simon worked for the Richmond, Va., diocese in its peace and justice office. A Catholic of 53 years, Simon converted to Lutheranism upon marriage. She has two children from a previous marriage.

She told NCR she was unaware that her relationship would become part of the story and said she discussed her marriage with only a small group of co-workers and parishioners at St. Francis Xavier.

When she first saw the posting for a director of social ministry at the parish, Simon, who at the time was working for St. James Parish, another urban Kansas City parish on the Troost corridor, said she was upfront about her sexuality and called to ask if it would disqualify her.

"I didn't want to send in an application that wasn't going to be considered," said Simon, who added she was happy when the parish encouraged her to apply.

During the interview process, she informed pastor Jesuit Fr. John Vowells that she was a lesbian and that her marriage to Donna Simon was widely known among those involved in social work along Troost. She also presented him a copy of a newspaper story about an employee fired at a Jesuit institution after marrying a same-sex partner.

"And [Vowells] said to me that he couldn't imagine that happening at St. Francis," Simon said.

Hired as director of social ministry in July 2013, Simon began work in the food pantry, initiating tours for parishioners, organizing fundraisers to replace old freezers, recruiting new volunteers and serving those come came to the pantry. On occasion, Donna Simon visited her.

When Jesuit Fr. Rafael Garcia replaced Vowells in January, she informed the new pastor of her same-sex relationship and asked again if it would affect her employment. She said he told her it was OK, and later that month, he met her wife at a community service group meeting.

After the Star story ran, Garcia emailed Simon expressing his displeasure about the revelation of her marriage. According to the lawsuit, Garcia also contacted the reporter of the story to ask what Simon said about her marriage. He asked the reporter if she was Catholic, and when she replied she was not, he "stated to her that she didn't know what she had done," the suit said.

In a May 9 meeting in his office, Garcia informed Simon that the diocese called and sent him a letter about the situation. Because the relationship was now public, he had to ask for her letter of resignation.

"It very much felt like the world was ending for me," she told NCR. "And I asked, Is there no other way?"

Told there was not, Simon reflected and prayed on the request over the weekend, coming to the conclusion that she had not done anything wrong and she would not resign.

"I did the job they had hired me for, and I did it well," she said.

Simon was fired the following Wednesday and given one month's pay and insurance benefits through the end of June. She said she was surprised to learn the diocese did not pay into unemployment insurance; the Richmond diocese had done so during her time there.

Simon continues to search for work. She said she still loves the St. Francis Xavier community and has encouraged parishioners who have reached out to her to continue supporting it. She called her work there addressing social injustices a passion and vocation.

Asked if she could still return to her old position given what has occurred, Simon said she viewed the situation as "a crazy mix-up" and could forgive if she could go back to serve.