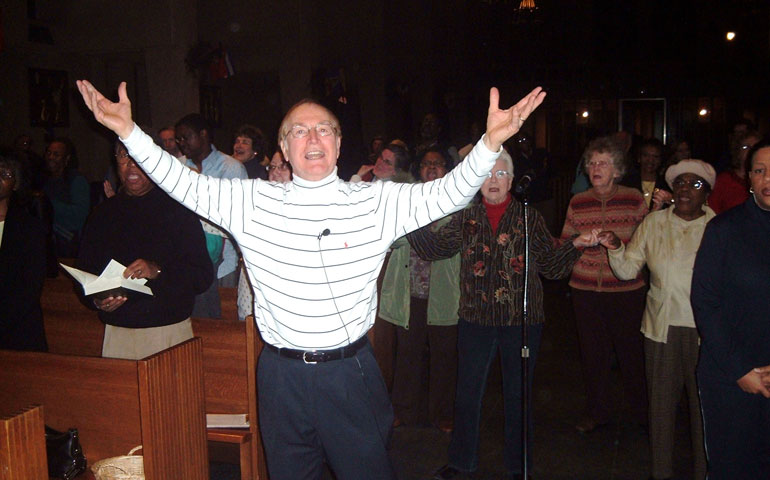 Deacon Norman Carroll at a mission and retreat at St. Matthew Church in Baltimore (Courtesy of Mary Moran)

Norman Carroll says he is an Episcopal deacon today rather than a Roman Catholic one -- as he had been for nearly 35 years -- largely because he had a one-on-one conversation on Feb. 26, 2013, with a man who insisted that Carroll state his personal view on the Catholic church's doctrine on the ordination of women.

Carroll told the man he felt the church had the authority to ordain women and that Pope John Paul II's apostolic teaching on the ordination of women was not infallible.

His view was reported to Miami Archbishop Thomas Wenski. A week later, on March 6, Wenski told Carroll's pastor to "instruct him [Carroll] that he is not to present himself for any diaconal ministries" and to "make an appointment ... to see me."

On the same date, Wenski corresponded with a parishioner of St. John Neumann Parish in Reston, Va., who had apparently been the person who complained about Carroll's mission presentation at the church.

"The deacon in spouting off on ways to reject the guidance of the Church in the formation of one's conscience was basically talking out of his depth and obviously beyond his competence," Wenski wrote.

He added, "I can appreciate the intemperate remarks of a deacon would cause you and others some scandal. I would hope that you would not confuse what he said with church teaching and therefore not allow his personal opinions to undermine your Catholic faith."

In the letter to the parishioner, Wenski said it was "my understanding that Deacon Norm Carroll was forbidden by my predecessor from preaching any missions" because Carroll had a "history of making confused and confusing representations of Catholic teaching."

St. John Neumann's pastor, Oblate Fr. Thomas Murphy, told NCR that he recalled Carroll's Lenten retreat of last year on the theme of the spirit of the Second Vatican Council. Murphy said it was well-received, and did not recall "anything out of the ordinary."

Carroll and Fr. Roger Holoubek, pastor of St. Maurice Parish in Dania Beach, Fla., where Carroll served for the past 27 years, met with Wenski on April 9, 2013. One outcome was the mandate that Carroll forward materials he uses in his retreat and mission programs to Wenski. Carroll has directed some 200 retreats and missions since 1996.

The 81-year-old Carroll, who holds a Doctor of Ministry degree, told NCR that he had never been suspended by Miami Archbishop John Favalora, who retired in 2010. Carroll said that if there is a file of complaints about his teaching, it has not been shared with him, and that the parishioner's letter of complaint was never shown to him.

Efforts to contact Favalora and the parishioner were unsuccessful. Miami archdiocesan communications director Mary Ross Agosta declined comment, other than to say the archdiocese "does not play out personnel issues in the media."

Carroll charges lack of due process, lack of opportunity to respond to accusations, absence of a chance for fraternal dialogue, and that "church governance too often does not reflect what Jesus, our founder, stood for."

In a Dec. 20, 2013, letter to Carroll, Wenski said he was willing to meet with him to discuss a route for the deacon's return to active ministry "as well as the history of the complaints concerning your teaching ministry."

Carroll, however, says that he has "been drummed out of the Catholic church." On March 30, he joined St. Benedict's Episcopal Church in Plantation, Fla.

In a Feb. 3 letter to Carroll, Wenski had repeated willingness to meet with Carroll "to discuss some kind of remedial action plan" to correct the deacon's "serious deficiencies and errors of teaching."

Wenski wrote that he had "not given much thought as to what remedial actions might be necessary" and that he was "open to discussing such a course of action with you."

However, a Dec. 20, 2013, letter to Carroll from the archdiocese's vicar general and chancellor for canonical affairs, Msgr. Chanel Jeanty, stated: "A restoration of ... faculties will be considered when a petition has been received from you or your current pastor and the necessary evaluation made after you have satisfactorily completed a remedial theological program to address the deficiencies in your theological understanding of some of the teachings of the Church as indicated to you in the letter from Archbishop Wenski dated Dec. 20, 2013."

Those "deficiencies and errors" were the conclusions of Msgr. José Juan Quijano, who reviewed the retreat and missions content forwarded by Carroll at Wenski's request. Quijano is a doctoral-level theology teacher at St. Vincent de Paul Regional Seminary in Boynton Beach, Fla.

In the Dec. 20 letter, Wenski thanked Carroll for his patience and told him that Quijano found in the deacon's work "heresy, several errors, mistakes and confusing statements that can mislead and misguide the People of God."

Wenski concluded, "This judgment is about a faulty work product and a deficient articulation of the truths of faith. It is not about you or your personal integrity, or even your own commitment and fidelity to the faith of our baptism. I know this is not the result you wished for or even perhaps expected. Nevertheless, I ask you to accept it in a spirit of docility and communion."

In a written narrative summarizing his view of the past year's events, Carroll said Quijano's "critique needs critique," but he was not permitted that opportunity.

In a Jan. 14 letter, Carroll said much the same to Wenski: "I appreciate your sincere offer to meet with me, and still request such a meeting despite your precipitous effective decision to suspend me indefinitely. I do trust, however, that in this meeting you ... will provide me the opportunity to respond in the spirit of due process to the multi-pronged critique of my … materials although your letter indicates you did not forward to me the full text of Msgr. Quijano's critique."

In a lengthy March 6 letter to Wenski, Carroll summarized much of the previous year's exchanges and events, and underscored that their roots were a private conversation on women's ordination. Carroll said his accuser based his criticism on "the non-collegial, non-infallible opinion of Pope John Paul II."

Wenski bristled. He wrote to Carroll March 13 that he was "disappointed that your letter gives no indication that you are open to any remedial education that would help address the lacunae in your understanding of Catholic teaching -- evidenced by your dismissive characterization of the teaching of Blessed John Paul II on the inadmissibility of women to Sacred Orders as 'opinion.' "

"It is also not correct to say that in '27 years of preaching and teaching' you have never received any criticism, but only accolades. Your file is filled with complaints that long predate my coming to the Archdiocese," Wenski wrote, adding: "If you wish, you may ask Msgr. Jeanty for an appointment and he would be happy to allow you to review the rather large file of complaints and concerns."

"I have never violated any teaching of the magisterium. If I could be shown where I have taught error, I would have rescinded and changed my teaching accordingly," he wrote in an email. "Priestly advisors -- including a former pastor of 13 years -- have told me I have not ever taught heresy and should not return for classwork. Because of the long delay already, I have no indication that even after another year of training I would even then be allowed to resume. And, to request such of me when my pastors of 27 years and untold numbers of parishioners applaud my didactic and homiletic efforts seems untoward. ... I believe I have always been orthodox as well as updated."

Asked if he had considered a canonical appeal of Wenski's suspension, Carroll said he had spoken to several canon lawyers. "They told me that priests have very little defense in matters such as these, and deacons have even less," he said. "So between that and the rather prohibitive costs" he rejected the idea.

A version of this story appeared in the May 9-22, 2014 print issue under the headline: Deacon says he was 'drummed out'.