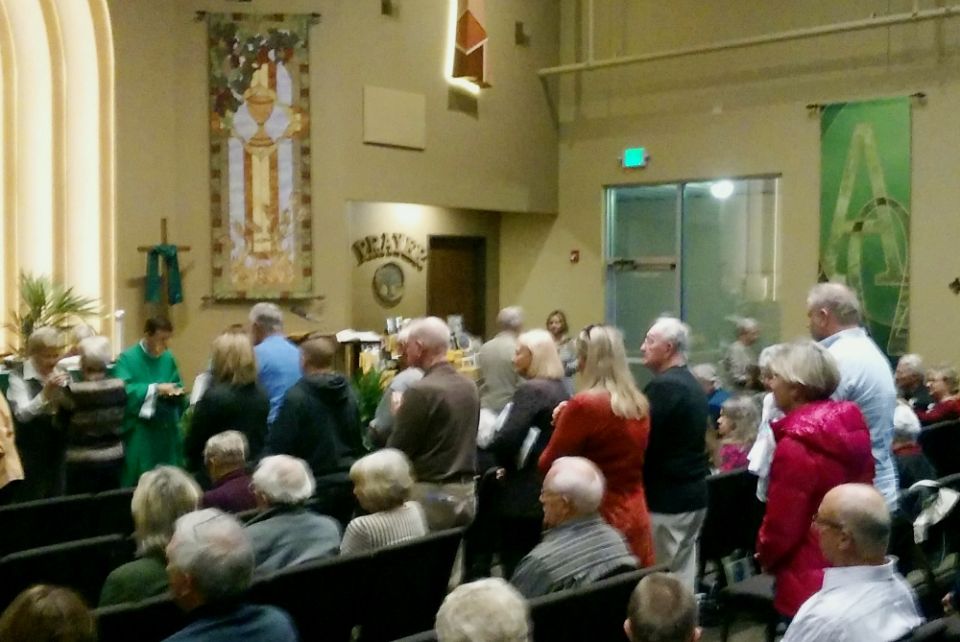 Here in this growing resort town, which the local tourist industry proclaims as the sunniest spot in Oregon, nestled on the eastern slope of the Cascades, religious rebellion is more laid back.

Attached to a strip mall storefront, a sign proclaims "All Are Welcome." Above it, there is a notation that this is the home of Holy Communion Church. It was founded six years ago by a group, mostly Catholics, disenchanted with the local Catholic parish, St. Francis of Assisi Church.

"If you ask them, they will say they are Roman Catholic," James Radloff, Holy Communion pastor, told NCR about his parishioners. And, after a series of interviews with Massgoers over a November weekend, his insight proves correct. 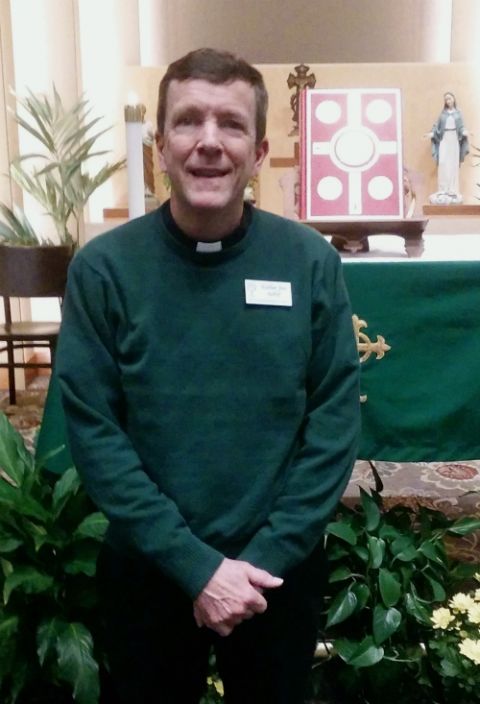 Radloff, the former pastor of St. Francis, accepted the position at the newly formed church in 2014 after he was suspended from ministry the previous year, for reasons never publicly disclosed, by Bishop Liam Cary of the Baker Diocese, which includes Bend.

If Catholicism is a cafeteria, Catholics here have a wide selection. Besides the Holy Communion community, there is St. Francis of Assisi, which offers Mass in a large suburban church in both English and Spanish. St. Francis boasts a new convent and parish school, as well as a chapel in Bend's downtown, where there is Mass in Latin.

Cary issued a statement in 2019 calling for Holy Communion parishioners to exempt themselves from ministries at diocesan Catholic parishes. The diocese now emphasizes a welcoming tone.

"Bishop Cary has always made it clear to those who attend Holy Communion Church that they are always welcome to return to the Roman Catholic Church," Msgr. Richard Fischer, vicar general of the Baker Diocese, told NCR.

Radloff disagrees, arguing that his Catholic parishioners have found their spiritual home. "I am in union with Rome. They are just not in union with me," he said.

That disunion has its roots during the appeal of his suspension from diocesan ministry when Radloff, as his case dragged on in the Vatican, took a different direction. He accepted the pastorate of the newly formed Holy Communion Church, affiliated with a wider denomination called the Evangelical Catholic Church. The community rents the space, which it has transformed, after extensive remodeling, into a small chapel and a spiritual home claiming some 300 families.

While some Holy Communion members come from Protestant traditions, most are former St. Francis of Assisi parishioners. Radloff, whose style of preaching is more akin to a genteel Mr. Rogers than any fiery reformer, tells NCR that the lines remain blurred. And that's OK, he said.

It's hard to locate Catholic heresy in the homiletic theme he offered on a weekend in early November. Believers, Radloff preached, should regularly attend Mass. The liturgy is word-for-word what most American Catholics experience. One difference is a projector, illustrating the lyrics of the hymns, which feature praise music with a repetitive beat, a feature usually part of evangelical Protestant megachurches. The congregational participation in singing is stronger than in most American Catholic churches.

Another difference is the prayer mentioning the local bishop. While Pope Francis is prayed for, an Evangelical Catholic bishop takes Cary's place in the Mass prayers.

The Holy Communion pastor, speaking to NCR May 13, noted that the church has created a successful online ministry during the pandemic, which closed physical gatherings in Oregon.

The parish is receiving 75% of its regular collections, much of that coming from viewers of a livestreamed Sunday morning Mass. The church holds only 150, but the livestream audience contains at least 600 households, he said, scattered over 15 states. Most are between the ages of 30-50, a group with relatively low church attendance.

"It's a neat outreach we never anticipated," said Radloff. 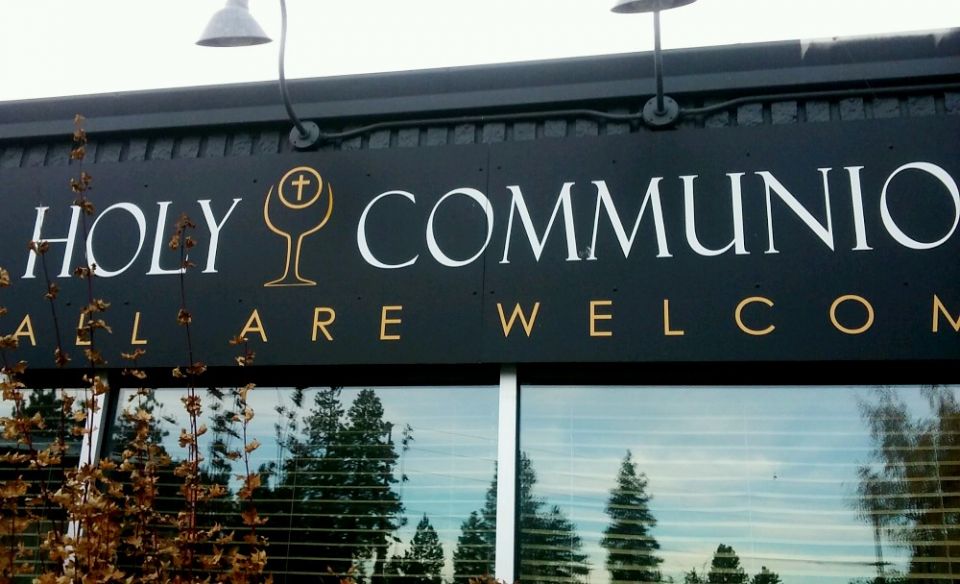 Attached to a strip mall storefront, a sign proclaims "All Are Welcome" at Holy Communion Church in Bend, Oregon. (NCR photo/Peter Feuerherd)

Oregon is planning to allow for church congregations to meet in July, and the pastor said he hopes to keep up the momentum generated during the pandemic, when Holy Communion congregants supported each other, including a program in which parishioners shopped for those considered vulnerable to illness.

Radloff, speaking from his office back in November, told NCR that Holy Communion Church makes a point of welcoming the divorced and remarried, Republicans and Democrats, LGBTQ people and anyone else who may feel estranged from mainstream Catholicism. He said it is run by a council, of which he is only one of nine.

The church makes a point of fitting into the community and is a regular contributor to the local homeless shelter. It advertises itself on television as "a different kind of Catholic church." Game nights take place on Saturdays and the community sponsored a softball team. Radloff is proud to point out that since the parish only pays rent, it doesn't have a mortgage, so he said it is free to spend more funds on community outreach.

The praise music gives the Sunday liturgy a somewhat evangelical feel. Yet the congregants emphasize that they see themselves as Catholics, albeit frequently with a story featuring alienation from mainstream Catholicism, frequently over marriage and sexuality issues.

Cathy Hendricks, parish administrator, spent 28 years in a Methodist congregation, before returning to what she described as her Catholic roots at Holy Communion. As a child of a divorced mother, she said she didn't feel comfortable growing up in her Catholic parish. She credits Holy Communion for being welcoming.

"It called me back. Being a Catholic never left me," she said.

For some former St. Francis parishioners, the leap to Holy Communion was more difficult. Many said they followed Radloff to Holy Communion. One member claims to be a cousin of Pope Paul VI, and her Catholic roots run deep. 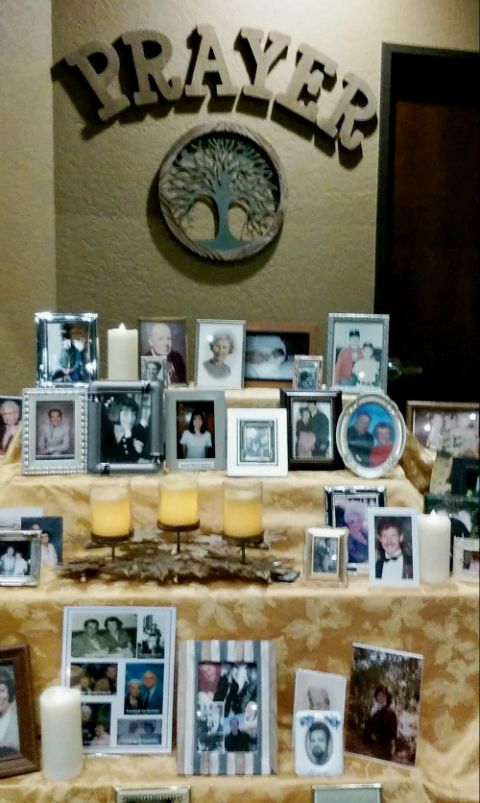 "His preaching is very meaningful to me," said Judy Uriz, who said she appreciates the priest's informal style, jokes and catechetical approach. "It took me about a year to be comfortable. I am a cradle Catholic. I experience that the Holy Spirit is in this church and the Real Presence is here."

Mike Marr, another Holy Communion congregant and vice president of the church's council, agreed. "This is the one experience I had when the priest came down from the pulpit and mixed with the congregation. Before, it was them up there and us down here."

Judy Parkinson teaches religious education to young people at Holy Communion. "My faith is Catholic and will always be Catholic," she said. She said that while mainstream Catholicism depends on a hierarchy, Holy Communion's lay-led style is appealing.

"I felt I had no voice," she said about St. Francis. "This church is a lay-led church. It's a complete opposite. We feel we have a voice."

For both Holy Communion and St. Francis, there is no lack of growth possibilities. Bend is among one of the top 10 growing cities in the country, with a population around 90,000, expected to soon reach six figures. For Radloff, Holy Communion is poised to welcome those Catholics disenchanted with the mainstream church.

Too often, he said, Catholic parishes have evolved into exclusive clubs with clear litmus tests.

But not all is so welcoming, or lay-led, at Holy Communion, said former associate pastor Mark Hebert. Formerly a priest of the Phoenix Diocese, Hebert, now married, moved to Bend and began working at Holy Communion. Most of Holy Communion is based on the personality of Radloff, he said.

"A lot of his leadership is about manipulation," Hebert said, noting that Holy Communion has undergone massive shifts in its pastoral council in its short history. Radloff, he said, dominates the decision-making process and will lash out at anyone who disagrees. "Father Jim calls most of the shots."

Radloff, he said, presents an image of "a young, hip priest who is very friendly, and on the surface, he is a warm and caring guy. Behind the scenes with lay leaders it is another story."

Hebert, now no longer serving in ministry, said he became disillusioned with Holy Communion, as it, in his view, failed to present an alternative model to clericalism. He is now seeking reconciliation with the Baker Diocese.

Radloff told NCR that Hebert was disappointed that a lay committee of the parish did not select him to be a permanent associate pastor.

"There's a bit of sour grapes there," said the pastor. "Here I am only one vote. Father Mark is looking for someone else to blame." 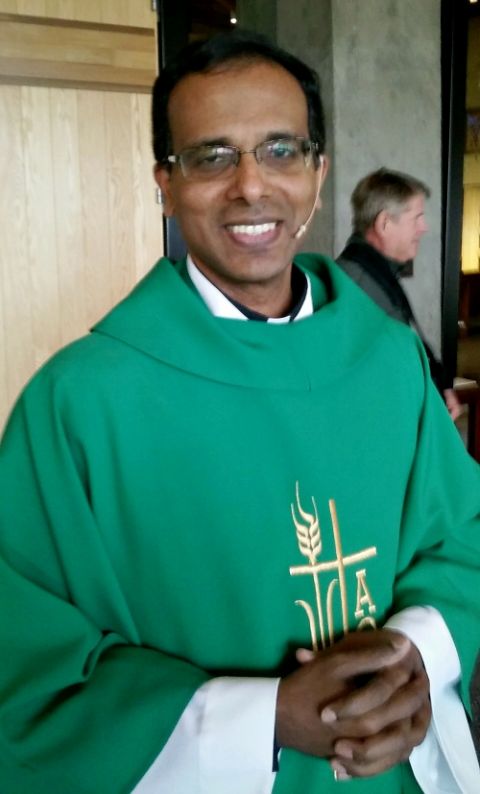 Meanwhile, life at St. Francis moves forward. The pastor there, Fr. Jose Thomas Mudakodiyil, on Nov. 10 announced what he described as a massive evangelization and fundraising effort. The mortgage for the church has been paid off and the India-born pastor said that the parish is ready to reach out to this city's growing population.

"We want everyone to feel welcome," he said.

The parish has 912 families, and has an offertory goal of more than $26,000 per week. Mudakodiyil said he wants to expand the Catholic school enrollment by increasing a scholarship endowment. Complete with Power Point, his presentation outlined his "Vision 2025" of a thriving Catholic parish here in central Oregon, with a wide array of programs to reach the grieving, promoting eucharistic adoration, and regular house blessings to welcome the growing numbers of newcomers to the region.

While Mudakodiyil is thinking long term, with a clear assumption that St. Francis Parish will be thriving in six years, the Catholic scene here remains fluid.

It's a small town, said one Holy Communion parishioner, even as Bend reaches close to the six-figure mark in population. There remains much back-and-forth between the two communities, she said, with some attending both churches, while long-term friendships and associations remain.

"It's not a reform movement," he said, noting that Holy Communion "serves those who have left for other reasons. It's basically there to serve Fr. Jim. There is no compelling vision."

Radloff said Holy Communion serves as a kind of halfway house for local Catholics, some of whom return to St. Francis or go to other denominations.

"I don't think God will be upset when we get up to heaven and finds out that you were going to more than one church. It's [about] where you will get spiritually fed," he said.

Parish | In the foothills of Oregon's Cascades, a laid-back Catholic schism