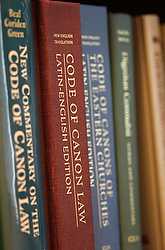 On May 14 Bishop Thomas J. Olmsted of Phoenix issued a statement saying that Mercy Sr. Margaret Mary McBride, the highest-ranking member of her order at Mercy-run St. Joseph’s Catholic Hospital and Medical Center in Phoenix, was “automatically excommunicated” because as head of the hospital’s ethics committee she approved an abortion to save the mother’s life.

Was she really excommunicated?

One nationally prominent canon lawyer in Washington said no when contacted by NCR. Another said the case in question has many gray areas that would cause him at least to question whether an excommunication had been merited or incurred. A third, who teaches at a seminary in Detroit, said definitely yes, McBride was excommunicated for her actions.

A fourth -- Dominican Fr. Kevin O’Rourke, both a canon lawyer and a leading U.S. Catholic bioethicist, writing for America magazine -- cited serious doubts about the alleged automatic excommunication from his perspectives both as a canon lawyer and moral theologian.

The questions surrounding the case are not just abstract: If McBride is formally convicted of a church crime (delict in church language) of having actively and freely participated in a procured abortion, she could be expelled from her religious community and be barred from receiving a pension from the order she has served for well over four decades.

As O’Rourke, a professor of bioethics at the Neiswanger Institute for Bioethics and Health Policy at the Stritch School of Medicine at Loyola University Chicago, noted accurately and perceptively, the moral question of whether the abortion constituted a procured direct abortion in canon law, for which the church’s legal sanction of excommunication applies for those directly involved, is not fully resolved by the facts so far known about the case.

Beyond the immediate questions -- whether the abortion performed at the hospital fit the church’s criteria for an intrinsically evil act of direct abortion subject to automatic excommunication for all direct participants and necessary accomplices, and whether McBride should be called a necessary accomplice -- are a series of secondary but important canonical and moral issues that have to be framed carefully in order to answer those more immediate questions.

According to O’Rourke, who has had access to the St. Joseph’s ethics committee report on the incident -- not yet made generally available to journalists -- originally the 27-year-old woman, mother already of four children and 10 weeks into her pregnancy, refused to consider an abortion when doctors at St. Joseph’s first advised her that it was the safest course to halt her worsening condition of pulmonary hypertension.

Within the next week, the woman’s pulmonary hypertension apparently reached a critical stage, where her pregnancy -- part of which includes hormonal signals from the placenta to increase blood flow to the lungs, medically aggravating her condition -- constituted a severe, immediate threat to her life.

The St. Joseph’s ethics committee, then headed by McBride, concurred with hospital doctors that the only way to save the woman’s life was to terminate the pregnancy in order to end the threat to her life from severe pulmonary hypertension.

A hospital spokeswoman said that at Olmsted’s request McBride has stepped down from her post on the ethics committee.

In the U.S. bishops’ Ethical and Religious Directives for Catholic Health Care Services, Directive 45 says, “Abortion -- that is, the directly intended termination of pregnancy before viability or the directly intended destruction of a viable fetus -- is never permitted. Every procedure whose sole immediate effect is the termination of pregnancy before viability is an abortion.”

But Directive 47 says, “Operations, treatments and medications that have as their direct purpose the cure of a proportionately serious pathological condition of a pregnant woman are permitted when they cannot be safely postponed until the child is viable, even if they will result in the death of the unborn child.” The ethics panel interpreted that directive as allowing the hospital in this case to do the abortion.

O’Rourke argued in part that the ethics committee had to deal with “the distinction between a direct and an indirect abortion” and that “there is a difficulty in identifying the cause of pulmonary hypertension in this case and thus in identifying the pathological organ.”

In the two main traditional cases of indirect or double-effect abortion cited in Catholic theological texts, one is removal of a woman’s fallopian tube along with its implanted fetus in an ectopic pregnancy -- where the improper implantation of the fetus in the fallopian tube presents both a threat to the mother’s life and no hope of survival for the fetus -- and the other is the case of uterine cancer, where removal of the cancerous uterus is necessary to save the mother’s life and the inevitable but unintended death of the fetus implanted in the uterus is a secondary effect.

Whether the removal of a placenta to alleviate life-threatening acute pulmonary hypertension could be considered another indirect or double-effect version of a morally acceptable abortion, another case where the death of the unborn child is unintended but inevitable, seems to be a question not yet fully answered by Catholic moralists.

But in the absence of any final official church pronouncement or a clear moral consensus on that question, the canon law question in the Phoenix case becomes: In those circumstances, did anyone -- even the doctors and assisting personnel directly involved in the operation -- automatically incur the church penalty of excommunication?

On the canonical level, Fr. James A. Coriden, a professor of canon law at Washington Theological Union, said he believes McBride, as a hospital administrator, was not subject to the penalty because she could not be considered a direct agent of the abortion or a necessary accomplice, as defined in canon law.

In the 1980s, after the bishop of Providence, R.I., announced that Mary Ann Sorrentino, a Catholic, was excommunicated because she was executive director of a local Planned Parenthood clinic that performed abortions, Coriden wrote an advisory opinion that an administrator of a medical facility cannot be considered an agent of or necessary accomplice to an abortion performed in that facility.

Coriden’s opinion was published in 1986 by the Canon Law Society of America in its journal, Roman Replies and CLSA Advisory Opinions.

He quoted two relevant canons in the code: “A person who procures a completed abortion incurs an automatic (latae sententiae) excommunication” (Canon 1398); and “Accomplices who are not named in the law ... incur an automatic penalty (latae sententiae) attached to an offense if it would not have been committed without their assistance and the penalty is of such a nature that it can punish them” (Canon 1329.2).

“Administrators of medical facilities,” he wrote, “are not necessary in the way ‘accomplices’ must be in order to incur a latae sententiae penalty.”

Coriden, who is a coeditor of the society’s New Commentary on the Code of Canon Law, told NCR that he believes his 1986 opinion applies to McBride as well.

“Someone in her role in the decision-making process, or in the administrative process as was the other case, is simply not envisioned by the canon. It envisions immediate cooperation in the procurement of an abortion,” he said. “It’s a step removed from what the canon envisions.”

Does the fact that she was head of the ethics committee that approved the abortion make a difference? In Coriden’s view, that is not sufficient to make her a necessary accomplice.

The canons on automatic penalties are so narrowly drawn that “I’m convinced there wasn’t an automatic excommunication,” he said. “Whether or not she is excommunicable, whether they could bring action against her, is another matter.”

In the Rhode Island case, he added, the woman was a promoter of abortion and the diocese could have taken action against her, but the diocese erred in saying her excommunication was automatic.

He said Olmsted’s public statement that McBride was automatically excommunicated does not constitute a legal declaration in a canonical sense. “One declares it only after a canonical procedure. To declare a penalty means to go through the process.”

Msgr. Thomas J. Green, a canon law professor at The Catholic University of America, said McBride “may be wrong and the bishop may be right in interpreting” the bishops’ health care directives.

But even if she was wrong, he said, “there’s a moral theological legitimacy question that’s related to, but still probably not at the heart and very core of the actual direct and necessary collaboration in the abortion itself. ... The question arises of whether or not her involvement was all that crucial, significant as it is.”

Green, who is also a coeditor of New Commentary on the Code of Canon Law and author of its section on penal law, said in the complex decisional process that led up to the abortion, one has to ask if it would have taken place anyway if she had not been involved, and if so, if she is as liable or responsible as the doctor and nurses involved in the actual operation.

He cited what he called the “necessity clause” of Canon 1329.2 for accomplices not named by the law -- that they are automatically excommunicated only if the crime “would not have been committed without their assistance.”

Edward N. Peters, a professor of canon law at Sacred Heart Major Seminary in Detroit, said in an e-mail response to NCR that he agrees with Coriden’s 1986 opinion and knows of no serious challenge to it, but the facts in the Phoenix case appear to be different.

“Sr. Margaret was running a hospital that did not do abortions,” he wrote. “It appears, then, that but for her direct and knowing authorization of a specific abortion at the hospital, a specific human being would not have been killed at St. Joseph’s.

“Therefore, as a moral matter, I think that Sr. Margaret’s actions meet the requirements of formal cooperation in grave sin and, as a canonical matter, I think she is liable as an accomplice to abortion under Canon 1329,” added Peters, whose Web site on canon law includes a page that tracks publicly known excommunications.

Green said that “even if she was necessarily involved, the worst-case scenario where the abortion would not have occurred without her involvement,” Canon 1325 may come into play.

It says the penalty provided by law “must be tempered or a penance employed in its place” if the person who committed the act did so “due to necessity or grave inconvenience,” even if the act is intrinsically evil.

Even if McBride erroneously thought she was acting within the framework of the bishops’ health care directives, that could be a mitigating circumstance that might lessen the penalty, he said.

“There are a lot of gray areas here,” he said.