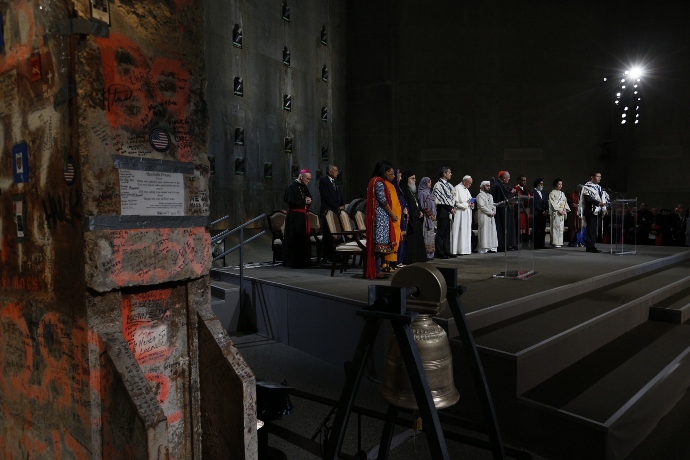 In front of one of the last remnants of the World Trade Center and among representatives of various faith traditions Sept. 25, Pope Francis movingly called for families of victims of the September 11, 2001, attacks to honor those killed by becoming instruments of peace and reconciliation.

After praying alongside those of Hindu, Buddhist, Sikh, Jewish, Christian and Muslim faiths at an interfaith service at the Ground Zero memorial, the pontiff said he hoped their presence together at a place of such destruction would be a sign that peace is truly possible.

"I trust that our presence together will be a powerful sign of our shared desire to be a force for reconciliation, peace and justice in this community and throughout the world," said the pope, speaking in front of the retaining wall of the fallen towers, which is preserved at the memorial.

"For all our differences and disagreements, we can live in a world of peace," Francis said.

"We can and must build unity on the basis of our diversity of languages, cultures and religions, and lift our voices against everything which would stand in the way of such unity," he said. "Together we are called to say 'no' to every attempt to impose uniformity and 'yes' to a diversity accepted and reconciled."

Saying such unity "can only happen if we uproot from our hearts all feelings of hatred, vengeance and resentment," the pope asked the hundreds present for the occasion to "implore from on high the gift of commitment to the cause of peace."

"In this way, the lives of our dear ones will not be lives which will one day be forgotten," he said. "Instead, they will be present whenever we strive to be prophets not of tearing down but of building up, prophets of reconciliation, prophets of peace."

Francis was speaking Friday as part of a service which saw poignant reflections from Jewish and Muslim leaders, a prayer of remembrance from the pope, and Hindu, Buddhist, Sikh, Christian, and Muslim meditations.

The multitude of different colors and patterns on the various religious attire worn by the 400 to 500 people in the audience stood out in the drab, concrete room: pink caps and red sashes of cardinals, pastel yellow and burgundy turbans of Sikh religious leaders, saffron robes of Buddhists, traditional prints of Native Americans, embroidered yarmulkes of Jews, embroidered jubba robes of Muslims.

The service was marked with evocative imagery. Before entering the memorial, the pope left a white flower on one of the new reflecting pools at the site where the towers once stood. He spoke only feet away from the 36-foot-tall “Last Column," the last steel beam removed from the World Trade Center site.

Before the service, Francis met with 20 family members of first responders who were killed while trying to help after the attacks on 9/11.

Meeting those families, the pontiff said, "made me see once again how acts of destruction are never impersonal, abstract or merely material."

"They always have a face, a concrete story, names," said the pope. "In those family members, we see the face of pain, a pain which still touches us and cries out to heaven."

"The name of so many loved ones are written around the towers’ footprints," he said. "We can see them, we can touch them, and we can never forget them."

Francis then praised the brotherly spirit with which New Yorkers helped each other on that terrible day.

"In a metropolis which might seem impersonal, faceless, lonely, you demonstrated the powerful solidarity born of mutual support, love and self-sacrifice," said the pope. "No one thought about race, nationality, neighborhoods, religion or politics."

"It was all about solidarity, meeting immediate needs, brotherhood," he said. "It was about being brothers and sisters. New York City firemen walked into the crumbling towers, with no concern for their own wellbeing. Many succumbed; their sacrifice enabled great numbers to be saved."

In his reflections before the pope's words, Muslim Imam Khalid Latif said the gathering of the diverse religious leaders should be an impulse for them to become partners for peacemaking.

"Through our knowing of each other today, let us move beyond a mere toleration of our differences and work towards a much-needed celebration of them," said Latif, a chaplain at New York University.

In his remembrance prayer, Francis asked God for "eternal light and peace" for those who died in the attacks, healing to those who continue to suffer injuries or illnesses, and that God may "bring your peace to our violent world."

"Comfort and console us, strengthen us in hope, and give us wisdom and courage to work tirelessly for a world where true peace and love reign among nations and the hearts of all," he prayed, using the same prayer Benedict XVI used in his 2008 visit to the site.

[Joshua J. McElwee is an NCR Vatican correspondent. His email address is jmcelwee@ncronline.org. Follow him on Twitter: @joshjmac. Freelance writer Alice Popovici contributed to this report.]