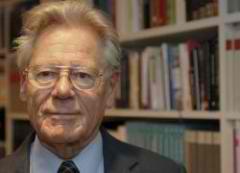 DETROIT -- Famed theologian Fr. Hans Kung has called for a “peaceful” revolution by world Catholics against the absolutism of papal power.

He made the call in a video message June 10, the first evening of a conference in Detroit of the American Catholic Council.

“I think few people realize how powerful the pope is,” Kung said, likening papal power today to the absolute power of French monarchs that the French people revolted against in 1789.

“We have to change an absolutist system without the French Revolution,” he said. “We have to have peaceful change.”

Kung, who was perhaps the most famous of the theological experts at the Second Vatican Council nearly 50 years ago, was born in Switzerland but spent most of his life teaching at the University of Tubingen, Germany.

Now 83, Kung is ecumenical professor emeritus at Tubingen and rarely travels for health reasons, so his message to the ACC was delivered in the form of a half-hour videotaped interview with American theologian Anthony T. Padovano, conducted last year at Kung’s home.

John Hushon, co-chairman of the ACC, said the conference, being held June 10-12 at Detroit’s Cobo Hall had more than 1,800 registered participants, from at least 44 states and 13 foreign countries.

In the interview with Kung, played on two giant screens in one of the convention center’s main rooms, the theologian predicted change in the church despite resistance from Rome. Vatican II “was a great success, but only 50 percent, he said.

On the one hand, he said, many reforms were realized, including renewal in the liturgy, a new appreciation of Scripture, and other significant changes such as recognition of the importance of the laity and the local church and various changes in church discipline.

“Many documents of the council are ambivalent documents because the Rome machinery -- the Roman Curia -- was able to stop any movement of reform, to stop it not completely, but half way.”

“What also I did not expect,” he added, was “that we could have such a restoration movement as under the Polish pope, and the German pope now.”

When asked what reasons he had for hope of reform in the church today, he answered that hope today is “sometimes a little difficult” in the face of a restorationist hierarchy, but “the world is moving on, going ahead, with or without the church” and “I believe the Gospel of Jesus Christ is stronger than the hierarchy.”

Referring to current crises in the church -- clerical sexual abuse of minors, the shortage of priests, alienation of women and youth -- he said, “Humanity learns most by suffering” -- whether in the church or in the recent U.S. economic crisis. Even though many economists and others saw the economic meltdown coming, “it was not possible to have a law in Congress before the catastrophe,” he said.

He said he thinks at least some Vatican officials are similarly recognizing that change is needed in the church.

“If we do not learn now, we have to suffer more -- more priests will be leaving, more parishes will be without pastors, more churches will be empty” and more young people and women will leave the church or dissociate internally from it, he said. “All these are indications, I think, that we have to change now.”

Chief sponsors the American Catholic Council are three independent Catholic groups seeking changes in the church: Voice of the Faithful, CORPUS and FutureChurch.

Hushon said when the ACC was formed three years ago it sought to create a “big tent dialogue among all” sectors of the U.S. church, independent of partisan or ideological lines, but “group after group, bishop after archbishop, said no, or ignored us.”

The divide was highlighted last October when Archbishop Allen Vigneron of Detroit warned his priests and people against participating in the ACC conference.

It was exacerbated further June 3 when Vigneron threatened to laicize any priest or deacon who participated in the ACC closing liturgy Pentecost Sunday, June 12, saying, “There are good reasons for believing forbidden concelebration will take place by the laity and with those not in full communion with the church.”

In a pre-meeting exchange with NCR Hushon denied the claim and documented it with correspondence in which the ACC told the archdiocese that “there will be only one presider, a priest in good standing.”

The ACC chose Cobo Hall as its venue because this year is the 35th anniversary of the bicentennial Call to Action conference, a national gathering of Catholic laity sponsored by the U.S. bishops, was held there, with Detroit’s Cardinal John Dearden as presider and host.

The 1976 conference, despite its flaws, has been credited with providing groundwork for and impetus to the bishops’ economic and peace pastorals in the 1980s as well as greater attention to racism, minorities, family life, people with disabilities, respect for human life and a wide range of other pastoral and social justice initiatives developed nationally or in dioceses in the ensuing years.