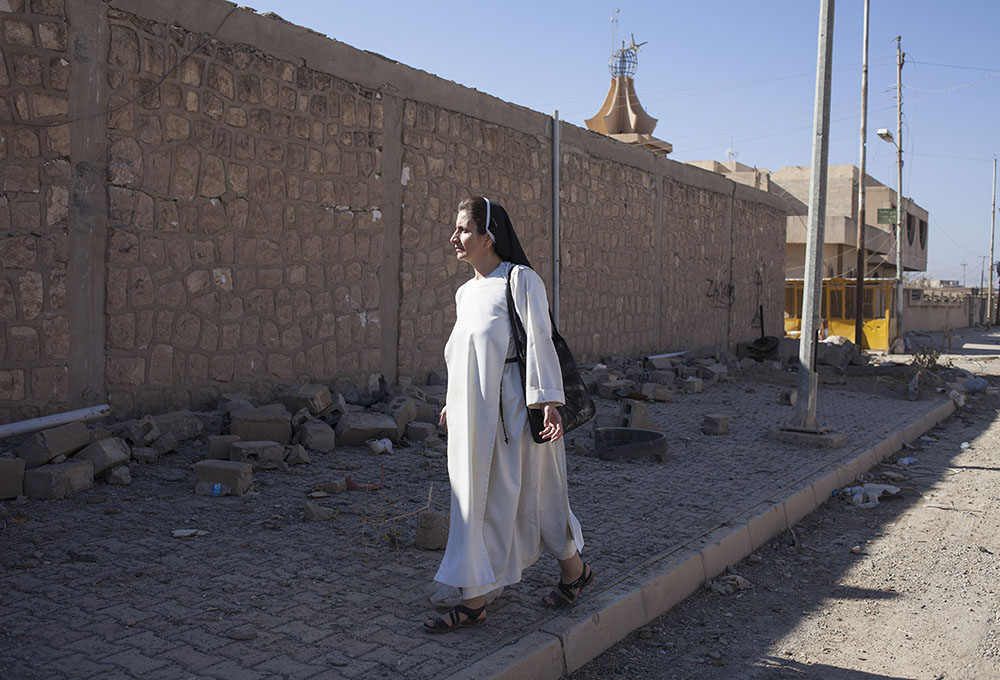 Dominican Sr. Luma Khudher on the streets of Qaraqosh in Iraq in November 2016, a few days after the city was liberated from Islamic State control (NCR photo/Eugenio Grosso)

Among those awaiting Pope Francis' planned March 5-8 visit to Iraq are the Dominican Sisters of St. Catherine of Siena, a community in the Nineveh plain that is still rebuilding after Islamic State fighters invaded the area some six years ago.

Sr. Luma Khudher, a member of the group, described how they received warning of the approaching fighters near midnight on Aug. 3, 2014, and fled from their motherhouse in Mosul right away.

The community found safety near Irbil in Iraqi's Kurdistan region, but was not able to return home for two years.

"We need the world to know what ISIS have done to us, how we have suffered in these years," Khudher told NCR. "For some time, the media focused on Iraq and then, all of a sudden, they forgot us."

"The pope's visit will place the world's eyes on us, on our story and our struggle to survive," she said, adding that she expects Francis will bring with him "a message of peace and coexistence."

"We are confident that his visit will bring balance to our country," said Khudher.

The Dominican sister was born and raised in Qaraqosh, an area home to one of the oldest Christian communities in the Middle East. She said that before the U.S.-led 2003 invasion of Iraq she was able to travel around freely in Iraq, without any fear about being a Christian in a Muslim-majority country.

That changed with the emergence of ISIS, known as Daesh in Arabic. The group took control of Mosul in June 2014, implementing a fundamentalist Islamic regime.

Khudher said that when she and her sisters returned to Mosul for the first time in 2016, after the Iraqi government had retaken control, what they found was unimaginable. Their convent had been raided, with bits and pieces of their past lives scattered on the floor and in the streets. 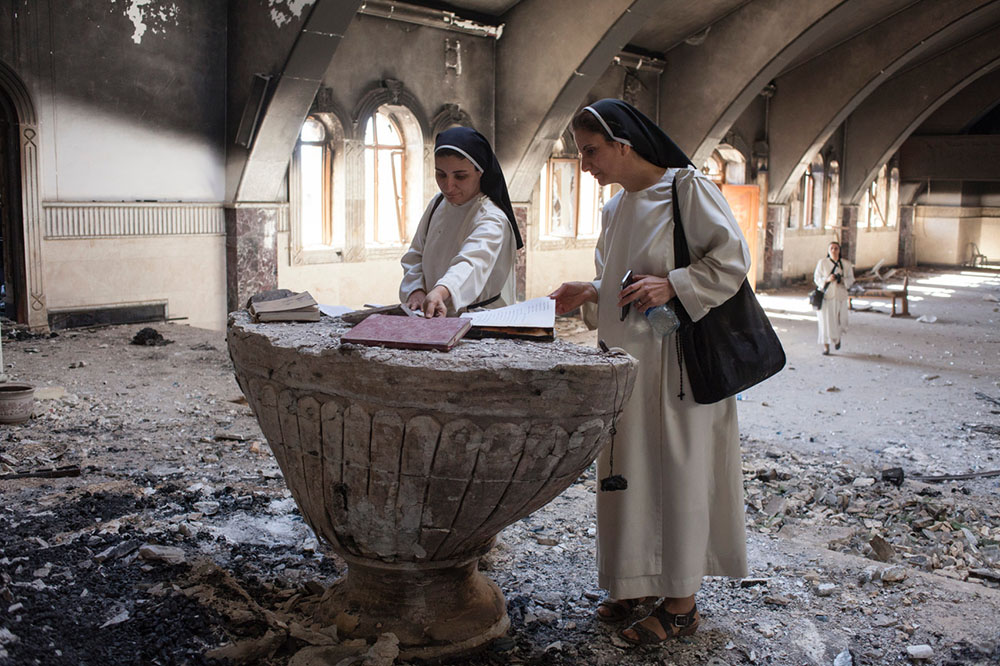 The Al-Tahera Cathedral, the largest Syriac-Catholic church in the Middle East, had been looted, desecrated and set on fire, and the courtyard turned into a firing range.

Francis is due to visit Irbil, Mosul and Qaraqosh on March 7. He is scheduled to stop at the cathedral, where he is expected to offer brief remarks to the local community.

Khudher credited the Vatican with helping provide the funds for them to begin to rebuild.

"People here had lost everything they owned and without that aid would have never been able to come back," said the sister. "Now that His Holiness is coming to Iraq, we want to thank him for what he has done for us."

Noting that many Iraqi Christians have decided to leave the country because of the destruction wrought by the Islamic State group, Khudher said the pope's visit "is an encouragement to remain in our land."

The majority of the Christian families displaced by ISIS took refuge in Ankawa, the Christian neighbourhood of Irbil, the capital of Iraqi's Kurdistan region.

"Our congregation opened a school for displaced children in Irbil but when the opportunity came to go back, we felt that it was important to return to our ancestral land," said Khudher.

The Nineveh Reconstruction Committee, a nonprofit founded by Aid to the Church in Need, estimates that almost half of the Christian families who had fled Qaraqosh have now returned.

"The town has completely changed since 2016," said Khudher. She said people there are eagerly preparing for Francis to come.

"The whole community has got involved in the organization for [the pope's] visit both spiritually and physically," she said. "For so long we have been waiting for him to visit us, now we want to thank him for remembering us."

Despite all the hard work, Al-Tahera is still closed. It is undergoing reconstruction due to severe damage. The fire set by the Islamic State fighters cracked its 22 marble pillars. They also destroyed the altar and graffitied its walls with anti-Christian insults. 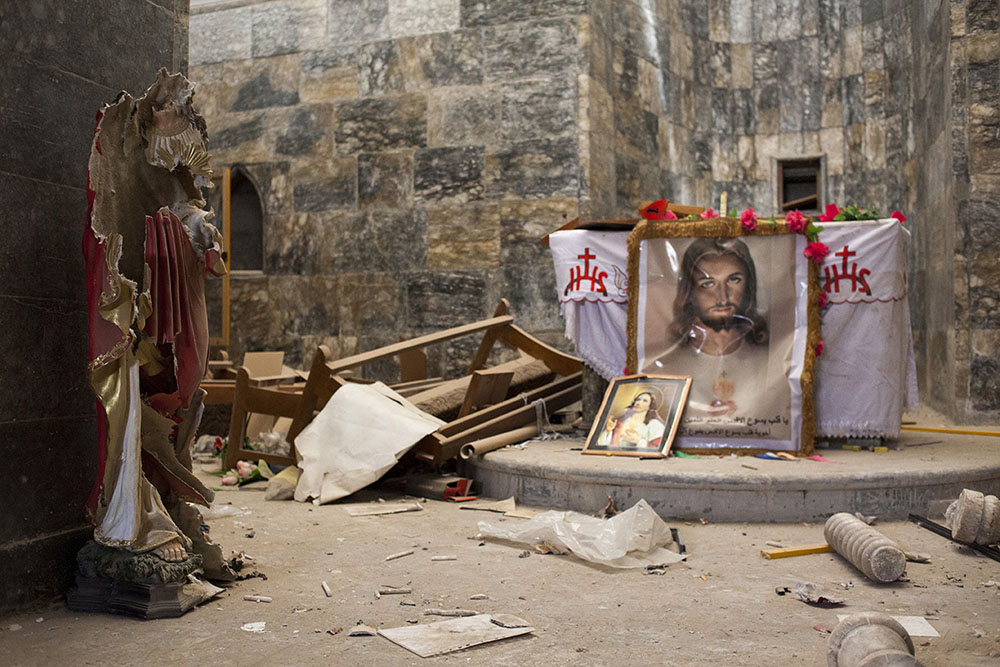 The inside of Al-Tahera Cathedral in Mosul, Iraq, in November 2016, a few days after Qaraqosh was liberated from Islamic State control (NCR photo/Eugenio Grosso)

"We hope that Al-Tahera, our church, will be ready to open its gate in time for Pope Francis to see it in all its glory," said Khudher. "It would be so important for us."

The sister said that Al-Tahera is not just a church, but way more. It is the symbol around which the community gathers to strengthen its own identity, in order to face and overcome difficult times.

"ISIS has devastated our hometown, looted our properties, but they could not take away our hope," said Khudher. She said her community has now decided to open a new school, open to both Christian and Muslim children.

"We had decided to call it Al-Tahera, like our church," said Khudher. "When Pope Francis comes, I would like to show him the school: That is how we turned his example into fact."

[Eugenio Grosso is an Italian photojournalist.]