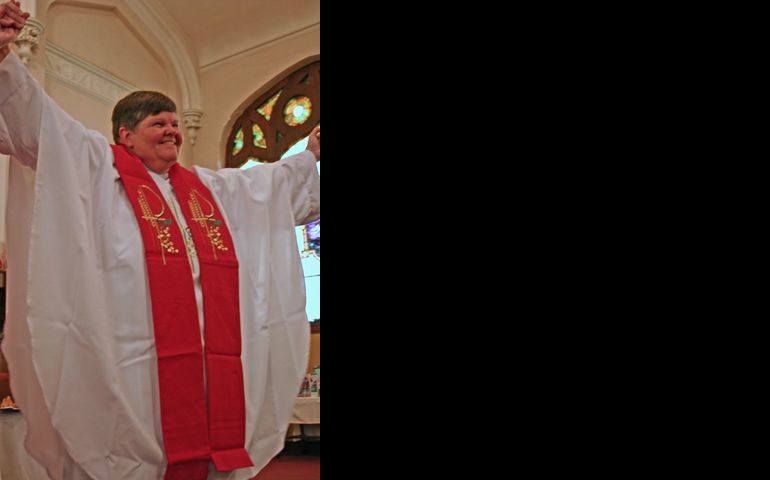 In a letter delivered to Walker's home Monday afternoon by certified mail, Kansas City-St. Joseph Bishop Robert Finn said Walker had been advised of the "seriousness of her contemplated course of action to attempt to receive sacred ordination" and that her excommunication was effective immediately. He added, however, that the diocese remained ready to assist Walker "if or when she seeks such process in good faith."

Walker says she plans to continue attending Mass at her parish church, St. James, though she will not be taking part in any liturgy.

"I'm not going to take Communion," she told NCR. "I won't in any way compromise the parish, but I attend to still be part of the community and go there for worship on Sunday."

Bridget Mary Meehan, the Association of Roman Catholic Women Priests bishop who presided over Walker's Jan. 3 ordination, posted to her blog both Finn's letter and a personal response, arguing that women ordained through the association are not leaving the church, but are leading it.

"The principal consecrating Roman Catholic male bishop who ordained our first women bishops is a bishop with apostolic succession within the Roman Catholic Church in communion with the pope. Therefore, our bishops validly ordain deacons, priests and bishops," she continued.

Previously, the diocese's vicar general, Fr. Charles Rowe, had invited Walker to meet with him in order to discuss her ordination. However, the two were unable to schedule a meeting.

[Dawn Cherie Araujo is a staff writer for Global Sisters Report, a special project of the National Catholic Reporter. Her email address is daraujo@ncronline. Follow her on Twitter @dawn_cherie.]

*This story was updated from an earlier version at 3:55 p.m. central time.