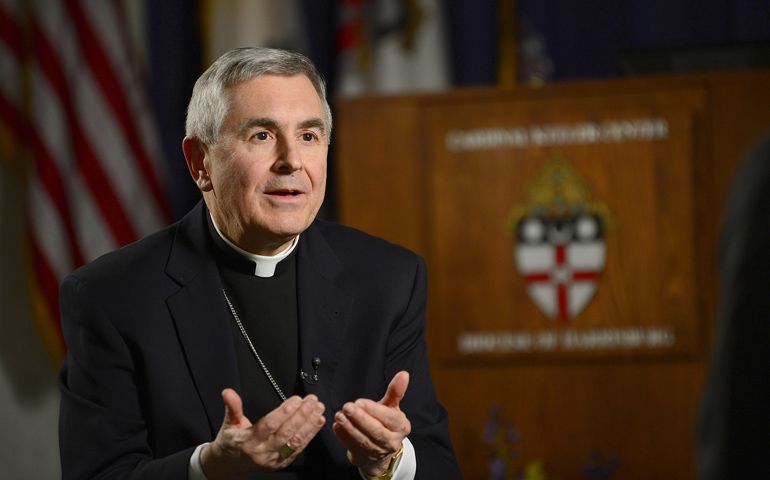 Pope Francis made the appointments Friday. They were announced in Washington by Archbishop Carlo Maria Vigano, apostolic nuncio to the United States. Later in the day, the new bishops were introduced at news conferences in the two state capitals.

Gainer, 66, was ordained as bishop of Lexington Feb. 22, 2003. He is a native of Pottsville, Pa., 55 miles from Harrisburg in the diocese of Allentown. Ordained for Allentown in 1973, he served in that diocese as a parish priest, campus minister and judicial vicar until his appointment as the second bishop of Lexington.

Msgr. Myron Cotta, 60, will become auxiliary bishop of the Sacramento diocese. He is a native of Dos Palos, Calif., in the Fresno diocese and has been a priest since 1987. He will be ordained a bishop March 25 at the Cathedral of the Blessed Sacrament.

Gainer succeeds Bishop Joseph McFadden, who died May 2. He will be installed March 19 in a service at the Cathedral of St. Patrick in Harrisburg.

At the Harrisburg news conference, Gainer said he hoped to continue a practice he had in Lexington of holding town-hall-style meetings around the diocese. Pennlive.com, affiliated with the Patriot-News daily newspaper, reported that he said that "even those who have criticized me would not criticize my accessibility and my availability. I don't hide behind a desk or lock myself up in my office."

He said by returning to the region of his roots, he hopes he'll find "in my genes some sense of what are the issues of the people of this part of the commonwealth."

In a statement posted that morning on the diocese of Lexington website, Gainer said the call he received from the nuncio Jan. 13 telling him of the appointment "completely surprised and, quite frankly, stunned" him, but that he happily accepted the pope's appointment.

Fr. Robert Gillelan Jr., who has been administrator of the Harrisburg diocese, noted in introducing Gainer that it seems appropriate on the feast of St. Francis de Sales, who was known as the "gentleman saint," to "welcome this Kentucky gentleman back to his native Pennsylvania."

Allentown Bishop John Barres said in a statement posted on that diocese's website that in his 30 years there, Gainer had served as an assistant pastor at two parishes and in campus ministry at Lafayette College, Kutztown University and Albright College.

Barres said, "This native son of Pottsville is a fine bishop, canonist and a very pastoral man with deep experience in evangelization."

Gainer earned a divinity master's degree at St. Charles Borromeo Seminary in Philadelphia before going on to earn his licentiate in canon law and a diploma in Latin letters at the Pontifical Gregorian University in Rome.

On the national level, he is a member of the U.S. bishops' Administrative Committee and the Committee on Priorities and Plans. He has served as a regional chairman for the U.S. Conference of Catholic Bishops and on its education, canonical affairs and church governance committees. He also has been a regional representative to the Committee for the Protection of Children and Young People, and liaison with the North American Forum on the Catechumenate. He also is on the Sacred Heart School of Theology board of directors.

Philadelphia Archbishop Charles Chaput said in a statement Gainer is "exactly the man to carry on the spirit and work" of the late McFadden, "while adding a whole new dimension and energy to the task. ... He'll be a great voice for the poor, the unborn, quality education and the faith of the Catholic community."

In Fresno, Cotta has served in several parishes, on assorted diocesan boards and in various posts including moderator of the curia, vicar for clergy, director of continuing formation of the clergy, supervisor of the safe environment program and director of the Society Propagation of the Faith.

Introducing him in Sacramento, Bishop Jaime Soto called him "a son of the Central Valley" who "knows our people, he knows our land and mountains, but, most of all, he knows the Lord Jesus and is eager to share the Lord's wisdom and charity with others."

Cotta, 60, grew up on a dairy farm in Merced County, said a press release by the Sacramento diocese. He is the grandson of Portuguese immigrants from the Azores island of Terceira who attended both Catholic and public schools. He earned bachelor's and a master's in divinity at St. John's Seminary in Camarillo, Calif., before his ordination Sept. 12, 1987.

Since 1996, Cotta has served on the diocesan board of trustees, priests' retirement board and personnel board.

In Sacramento, in addition to his duties as auxiliary bishop, he will serve as diocesan vicar general.

Cotta said in a statement that "it is humbling to be called to this capacity of ministry of service to the church; in particular, to the Diocese of Sacramento."

He thanked God "for the call to the episcopacy and for the many blessings I have received over 26 years of ordained priesthood among God's people."

The diocese of Sacramento in north-central California has a Catholic population of about 980,000, out of a total population of 3.5 million.