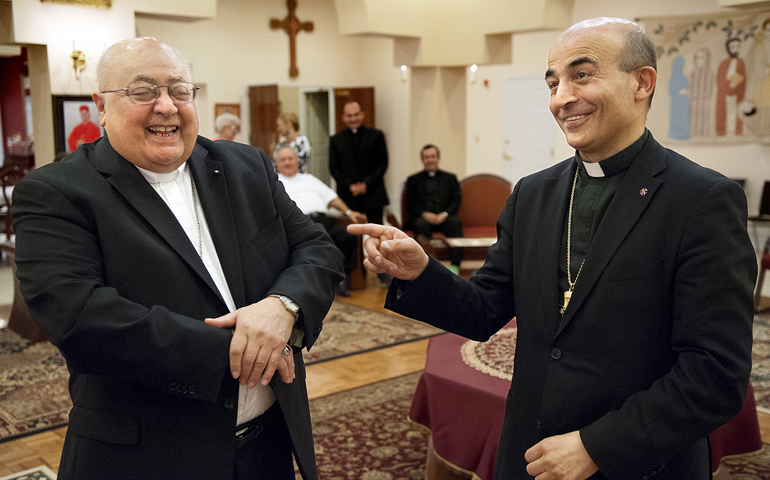 Retiring Bishop Robert Shaheen, left, of the U.S. Maronite Eparchy of Our Lady of Lebanon, shares a light moment with his successor, Bishop-designate Abdallah Zaidan, July 12 at the Maronite Pastoral Center in St. Louis. (CNS/Sid Hastings)

Those attending the annual convention of the National Apostolate of Maronites in Tampa, Fla., in early July had no idea that a newly named bishop was in their midst.

Fr. Abdallah Zaidan was in his hotel room July 5 preparing for Mass when he received a call from the apostolic nunciature in Washington that Pope Francis was naming him the next eparch, or bishop, of the Maronite Eparchy of Our Lady of Lebanon.

The eparchy, which relocated its headquarters from Los Angeles to St. Louis about 12 years ago, serves approximately 34,000 Maronite Catholics in 34 states.

Msgr. Jean-Francois Lantheaume, the nunciature's charge d'affaires, announced July 10 that Zaidan, rector of Our Lady of Mount Lebanon-St. Peter Maronite Cathedral in Los Angeles, will succeed retiring Bishop Robert Shaheen, 76, who has served as a priest and bishop in St. Louis since 1967.

Lebanese Cardinal Bechara Rai, the Maronite patriarch, is expected to preside at Zaidan's episcopal ordination, set for Sept. 28 at the Shrine of Our Lady of Lebanon in Harissa, Lebanon.

The 50-year-old native of Lebanon and member of the Maronite Lebanon Missionaries made his first visit to St. Louis as bishop-designate July 12. He was joined by about a dozen priests, bishops and laity from St. Louis and elsewhere in the eparchy for a reception at the Maronite Pastoral Center in a downtown St. Louis neighborhood.

Zaidan said he was "humbled" by Pope Francis' decision to name him bishop.

"I will strive to the best of my abilities to be the good shepherd following the example of Christ, the good shepherd," he told the group in a prepared statement. "I promise to lay myself down at the service of the church and even place my human weakness into his hands to remind myself of the need to be humble."

Zaidan said he has chosen the phrase "thy will be done" as his episcopal motto. "I promise to work hard, to reach out to all, to strengthen the weak and encourage the faithful to move forward the message of the new evangelization, the message of love that is much needed in today's world."

Born in Kosaybe, Lebanon, Zaidan was ordained a priest in 1981 and professed final vows as a member of the Maronite Lebanon Missionaries in 1984. He has been cathedral rector in Los Angeles since 1994.

Zaidan received a licentiate in theology from Holy Spirit University in Kaslik, Lebanon, in 1986 and a license in philosophy in 1987. He holds a master's degree in school administration from St. John's University and pursued doctoral studies in education at Pepperdine University in Malibu, Calif.

After his ordination, Zaidan's assignments included assistant rector of the minor seminary of the Maronite Missionaries, 1986-1988. At the same time he was chaplain of the Lay Apostolic Marianist Movement and Young Catholic Students. From 1988 to 1990, he was assistant rector of Our Lady of Lebanon Cathedral in Brooklyn.

From 1990 to 1994, he was pastor at St. George Maronite Catholic Church in San Antonio and helped establish Maronite missions in Dallas and Houston. He has overseen the United States component of Project Roots, an effort to help Lebanese Americans to register their vital life events, such as marriages and births, in Lebanon and to help preserve Lebanese heritage and culture.

During his visit to St. Louis, Zaidan reflected on Lebanon being a symbol of peace to the world. Blessed John Paul II once noted that Lebanon is more than a country, adding that it is a "message of freedom," where Christians and Muslims can live side by side.

"If you look at the history of the Maronite church, and the geography and demography of the Lebanese people, you see how much the Maronites are integrated in all parts of the world," Zaidan said.

[Jennifer Brinker is a staff writer at the St. Louis Review and Catholic St. Louis, the newspaper and magazine, respectively, of the St. Louis archdiocese.]