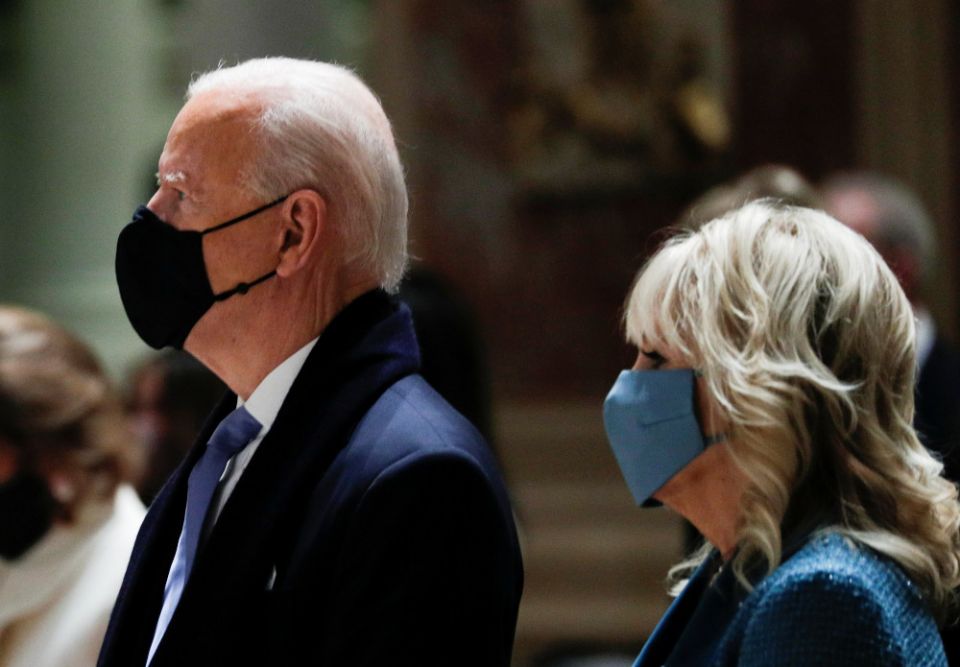 President-elect Joe Biden and his wife, Jill Biden, attend Mass at the Cathedral of St. Matthew the Apostle in Washington Jan. 20, 2021, before his presidential inauguration. (CNS/Reuters/Tom Brenner)

The 46th president of the United States along with fellow Catholics and other people of goodwill began the latest chapter in the nation's political history with a Mass ahead of the presidential inauguration.

Joe Biden and his wife, Jill, with a group of politicians and family, attended Mass at Washington's St. Matthew's Cathedral the morning of Jan. 20, starting his term with worship just before being sworn in. The Bidens were joined in spirit by thousands of others who joined online Masses and events wishing him — and the nation — well.

In California, Archbishop José H. Gomez of Los Angeles, president of the U.S. Conference of Catholic Bishops, began Inauguration Day with a Mass calling for unity and as well as praying for Biden and his family.

And throughout the United States, many Catholic parishes celebrated with online Masses of their own.

"Before all the activities of this wonderful day, we quiet ourselves and ground ourselves in the faithful love of God and love we have for one another," said Jesuit Fr. Kevin O'Brien, president of California's Santa Clara University, who celebrated the Mass at St. Matthew Cathedral.

"This day, when we emphasize national unity, we welcome people of all faith traditions and all political preferences, for we are all sons and daughters of God and we all need to say thank you to the God who has been so, so good to us and to our country. And we also need to rely on God's help, God's encouragement," the priest said.

Though the St. Matthew's Mass was not open to the public, a short video from part of the Mass and posted online by PBS News Hour featured the voice of O'Brien. 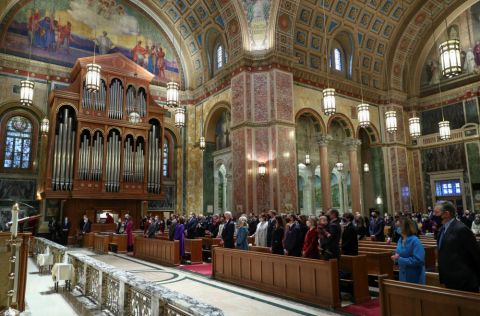 President-elect Joe Biden and his wife, Jill Biden, in second pew from right at far left, attend Mass before his presidential inauguration at the Cathedral of St. Matthew the Apostle in Washington Jan. 20, 2021. (CNS/Reuters/Tom Brenner)

Though U.S. presidents usually begin Inauguration Day with a religious service at St. John's Episcopal Church, a stone's throw from the White House, Biden along with Republican and Democrat congressional leaders, began the day at St. Matthew's, the seat of the Archdiocese of Washington. The venue was the setting for the funeral of the first Catholic president, John F. Kennedy, after he was assassinated in 1963.

"As we know, President Biden will be our first president in 60 years to profess the Catholic faith, so let us pray that God will continue to strengthen and deepen his personal faith," said Gomez at the Mass he celebrated. "As we know, our nation faces many challenges at this moment."

One is the pandemic as well as political differences, he said.

"We also know that we are facing division in our country, both political and cultural, so we pray today for national unity and healing and we pray for peace," Gomez said.

Gomez said the country now needs to hear the voice of believers "and to see our good deeds."

While he didn't mention the violence that took place in Washington in early January, he seemed to be referencing the rancor present in the nation that seemed to culminate in the violent mob that descended on the U.S. Capitol and other ways division has manifested itself in the country.

"We need to share the love of God by the way we live, the way we love and serve our neighbor," he said.

Gomez said that no one has all the answers and called on believers to listen to each other and care for one another.

"And pray for one another, even those who have a different point of view. We need to love our enemies and bless those who oppose us," he said. "Now is a time for us to come together, start talking again, seek common ground as Americans. Nothing is lost and everything is gained by sincere dialogue."

Jesuit Fr. Tom Reese, in a homily for an online Mass sponsored by the group Catholic Democrats, referred to the Gospel reading from Matthew 25: 31-46: "The Judgment of the Nations."

It included a section that has become the Gospel rallying cry in Christian social justice circles, protesting politicians who made decisions adversely affecting the poor and disenfranchised during the Trump presidency:

On Inauguration Day 2021, the Scripture readings "challenge us as a nation," Reese said. 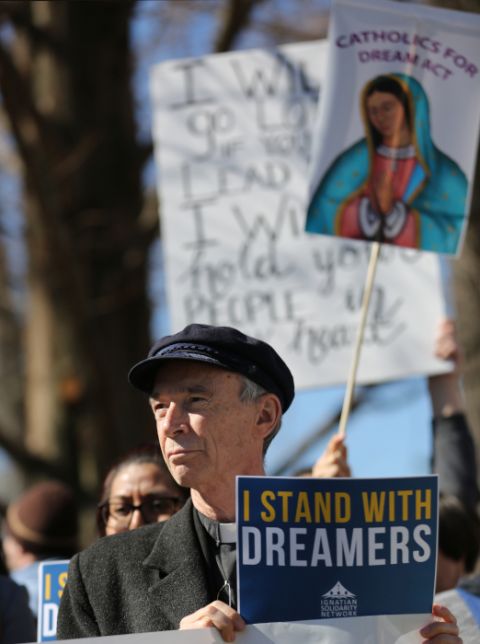 Jesuit Fr. Thomas J. Reese attends an immigrants'-rights protest Feb. 27, 2018 in Washington. Reese gave a homily for an online Mass sponsored by the group Catholic Democrats, in which he said Christians can honor God by caring for others, particularly those in need. (CNS/Bob Roller)

"Some Christians do not believe in using government to help the poor and marginalized or to regulate the economy, but Catholic social teaching promotes the role of government in making the world a better place," he said. "This means feeding the hungry through [the Supplemental Nutrition Assistance Program], healing the sick through health care reform, protecting the earth through environmental regulations."

He encouraged those about to receive the vaccine against the coronavirus to help out, feeding the homeless, volunteering in their communities, until the nation and the world recovers from the pandemic.

He said Christians can honor God by caring for others, particularly those in need.

Jeannie Gaffigan, writer and executive producer for "The Jim Gaffigan Show," read the prayers of the faithful during the online Mass, focusing on combating racism, social and economic inequality, as well as clericalism.

Regina Mitchell, a parishioner at Holy Trinity Catholic Church in Washington — where Kennedy frequently attended Mass and where Biden has attended Mass in the past — said she and husband Paul watched the Catholic Democrats' Mass and other inauguration Catholic events online.

"We were both so touched by the prayers of the faithful, which so beautifully described the vast needs of mankind at this time and our desire, as a church, to be a part of ministering to all in need in partnership with God," she said in an email to Catholic News Service Jan. 20.

Washington Catholic Margie Legowski also watched the same Mass and said that as soon as the opening hymn, "Christ Be Our Light" started, "I began to feel a gentle wave of relief and peace wash over me. People started to post greetings in the chat from D.C., New Jersey, Oregon, Alaska, Ireland, Chicago, Louisiana, England and on and on."

"It was beautiful, low-key, reassuring and challenging and by the end of the liturgy, I felt that sense of community and peace one feels after a funeral or a liturgy when God's presence is palpable," she said. "Looking back, I now recognize the feeling that I was carrying: Hope."