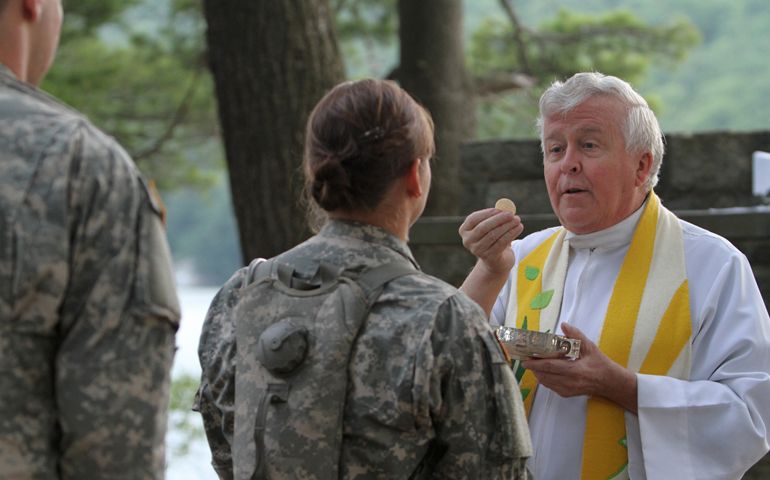 At least one U.S. parish will pass on "serving those who serve" this weekend.

In a letter dated Wednesday, Fr. Timothy Taugher, pastor of St. Francis of Assisi Church in Binghamton*, N.Y., alerted his bishop that the parish would not participate in the bishops' conference-approved collection this weekend for the U.S. Archdiocese for the Military Services.

Using the tagline "serving those who serve," a bulletin insert provided by the military archdiocese that promoted the collection describes Catholic military priest-chaplains as "the last line of spiritual defense for the men and women who ﬁght our wars. They bless our troops with the healing power of the sacraments and good counsel. And they need YOUR SUPPORT."

That support won't come from St. Francis parish. Taugher told NCR he voiced his decision to Bishop Robert Cunningham as a way to "break the silence to the bishops and our leadership" regarding recent U.S. wars and to address the perception of a creeping militarism in churches at odds with the message of Jesus.

In his letter, Taugher -- a member of Pax Christi USA and of an upstate New York group called Friends of Franz Jagerstatter -- prayed for an authentic church founded on nonviolence, and "that by our witness we will help lessen war and violence in our world."

A Syracuse diocesan spokeswoman said it is diocesan policy not to comment on letters sent from priests to the bishop.

When asked about concerns that the collection sends a message that the church condones U.S. militarism, Military Services Archbishop Timothy Broglio told NCR government policies and military decisions do not negate the needs for pastoral care.

At their November 2012 meeting, U.S. bishops voted 123-42 (with eight abstentions) to hold a nationwide collection every three years, beginning this year, for the benefit of the military archdiocese. Projections anticipate raising $10 million each time the voluntary collection -- a result of a 2009 proposal by then-Denver Archbishop Charles Chaput, now of Philadelphia -- is taken as part of an effort to aid the archdiocese in providing ministries and services to military personnel and their families.

Currently, the archdiocese, created in 1985 by Pope John Paul II and now led by Broglio and four auxiliary bishops, requires a $5.1 million budget to serve 1.8 million Catholics. It estimates Catholics constitute 25 percent of the military.

The 1,000-plus chaplains, serving in all five military branches, fulfill a variety of roles: 234 priests are on active duty; 218 are nonactive and minister to the National Guard and Reserves; 279 work in the Department of Veterans Affairs, often in medical centers; and 374 serve the Department of Defense. The U.S. government pays them.

Traditionally, the archdiocese has run solely on private donations, as its atypical structure precludes parish collections and it receives no direct financial support from the U.S. government. The collection expects to fund faith formation and religious programs as well as cover pastoral and sacramental costs and travel.

But a large chunk will go toward offsetting the costs of new priests, who are loaned to the military archdiocese after completing three years in their home diocese or religious order. The loaning institution covers half the training costs, with the military archdiocese estimating $2.7 million (outside the $5.1 million budget) to train its 37 seminarians in the next five years.

"With our country at war for more than 10 years, the men and women of the military have experienced very heavy burdens and hardships. This collection would allow Catholics to express support for military personnel and help support the archdiocese," Youngstown, Ohio, Bishop George Murry, chair of the committee on priorities and plans, told Catholic News Service after the collection's approval.

But some people question whether such support blurs the church's teachings on nonviolence.

"The violence of war ... is a major trauma to the soul that no drug can effectively heal," Taugher wrote. "As so many veterans say 'War is Hell,' raises the question, 'Why as a faith community, by our silence and lack of conscience formation regarding war and the military, send our sons and daughters to hell/war?' "

The collection, scheduled for Nov. 9-10, coincides with the feast day (Nov. 11) of St. Martin of Tours, the 4th-century Roman soldier who left the military life upon his conversion to Christianity.

"It seems as though two competing allegiances are crying for our attention. To which do we honor -- the one that upholds militarism or the one that proclaims the Gospel of Life?" Taugher asked.

Broglio acknowledged that violence has become a growing part of society, whether in war or peacetime. For his chaplains, the violence of war represents "an unwanted byproduct" of that situation, and they freely discuss the church's teachings on nonviolence when approached by a distressed soldier.

As for the collection objections, the archbishop said the archdiocese has fielded few complaints. Taugher indicated that fellow priests in the diocese and in other parts of the country share his concern with the collection, and he said he has encouraged them to also write their bishops.

Outside the clergy, a small, lay-led online effort seeks to offer Catholics opposed to the collection an alternative when the basket makes its way through the pews.

Catholics Against Militarism has made available on its website downloadable cards for Catholics opposed to the collection "to put in the collection basket instead of money, just to make their voices heard," member Ellen Finnigan said.

The cards, in part, read: "A nationwide collection for AMS sends a message to American Catholics that the Catholic Church condones America's current military activity and post-9-11 wars. ... Church is no place to glorify the ideals of the professional military class, which run contrary to most, if not all, Christian beliefs and teachings, including the Christian Just War theory. Today, in a spirit of peace, I offer my dissent."

The cards represent a way for parishioners to let their pastors know not everyone agrees with such support for the military interjected into the liturgy, Finnigan said.

"The point isn't so much to speak about the chaplaincy, the point is more to communicate to the priests in local churches the objections of people to these wars and to what appears to be a perception of unconditional, unquestioned support for anything that involves the military," she said, adding that she hopes the cards will embolden hesitant priests to address issues of war and peace knowing there are parishioners who want to hear that message.

"I see it as a way to registering dissent to a larger problem. And this is just one opportunity to do that," she said.

Editor's Note: This story has been edited to correct the spelling of Binghamton, N.Y.

Mudslide takes couple's home, but they worry more about others' losses