Ministering to, ministering as 'the marginalized' theme of conference 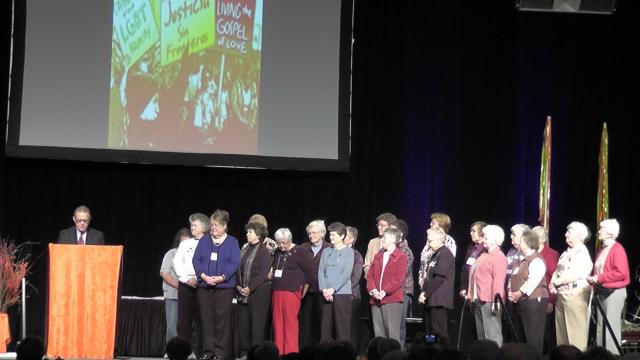 Jack Rubio, a member of the Call to Action national board, presents Sr. Margret McBride (in purple) with the group's 2011 Leadership Award. She was joined on stage with other Sister of Mercy. (Photo by Brian Roewe)

MILWAUKEE -- Words from keynote speaker Jamie Manson describing a church on the margins fired up attendees at the annual Call to Action national conference this past weekend in Milwaukee.

"The margins of the church are a place to be embraced," Manson said Friday night to an audience of some 2,000 people. "Why? Because very often this is where we often see most clearly the face of God."

Her description of embracing the marginalized led the weekend's theme of "Living the Gospel of Love."

Call To Action, a Catholic church reform group based in Chicago, hosted a series of sessions, keynote addresses, and workshops ranging from the Palestine-Israel conflict to Catholic Social Teaching and labor to the new Roman Missal translation.

McBride, a former member of Phoenix's St. Joseph's Hospital and Medical Center ethics committee, was in the news last year over controversy for assenting to the abortion of an 11-week-old fetus in order to save the life of a pregnant woman suffering from pulmonary hypertension.

At one of Friday's pre-conference sessions, Benedictine Fr. Anthony Ruff of St. John's Abbey and University in Minnesota discussed the strengths and challenges of the new Roman Missal translation and the factors involved in translating. Ruff was on the International Commission on English in the Liturgy for the new translation but he was removed from the team in 2010. His position withdrawing support of the new translation was in the form of a letter posted on the America website.

In a session led by the Survivors Network of those Abused by Priests, retired Detroit auxiliary bishop Thomas Gumbleton narrated what happened to him after he spoke in Ohio in 2006 in support of a statute of limitations extension for civil suits for victims of sexual abuse. (See related story).

One session focused on immigration between the U.S. and Mexico. Raul Al-qaraz Ochoa, an organizer for community and migrant liberation, spoke of different campaigns to "challenge the root of this oppression."

Two films shown later in the day also dealt with immigration: "La Bestia", about the journeys of Central American migrants traveling through Mexico and "A Forgotten Injustice", a documentary about the forced migration out of the U.S. of almost 2 million Mexican Americans during the Great Depression.

Jean Merchant and Alta Jacko of Roman Catholic Womenpriests along with Maryknoll Fr. Roy Bourgeois led a session titled "Confronting Sexism in the Catholic Church: Why We Need Women Priests." The film, "Pink Smoke Over the Vatican" also had a viewing.

Anglican Rev. Niam Ateek, a Palestinian and a citizen of Israel, discussed the Palestine-Israel conflict and an organization he founded, Sabeel Ecumenical Liberation Theology Center in Jerusalem.

Workshops included anti-racism caucuses and a discussion on Catholic Social Teaching in relation to labor rights.

Imperial issues for American Christians in the world today, especially with issues of military power and economic injustice, illustrated the afternoon keynote by Marcus Borg, a canon theologian at Trinity Episcopal Cathedral in Portland, Ore.

Kenneth Hardy, a professor of family therapy at Drexel University in Philadelphia, used his time as the evening keynote to put the audience in touch with what "psychological homelessness" and the spiritual meaning of "home" means.

The jailor, he said, often puts profit and politic before principle, and self-interest is his or her major interest; the helper "picks up the pieces" but does not engage in any more activism to prevent suffering from occurring; and the healer is committed to emancipation and liberation of one's spirit, and sees the connection between "self" and "other."

"My hope is that each of us will chose the key that says 'healer'" and trust that God will guide our work, he said.

Before receiving the Leadership Award, fellow Sisters of Mercy joined McBride on stage and raised their hands in blessing over her, singing an affirmation song.

"I think in the midst of all of this that is what we're called to do today: is be a merciful and forgiving church, because that's the piece that seems to be missing right now," McBride told the conference attendees.

She challenged attendees to go home and mend their broken relationships, to "be that merciful and forgiving church."

Closing the conference addresses and keeping with the theme of being companions with those on the margins, Ada Maria Isasi-Diaz, a professor emerita of Christian social ethics and theology at Drew University in Madison, N.J., remarked on the need for solidarity with the impoverished and the oppressed.

"Solidarity deepens our understanding of the fact that human beings are social … Solidarity is about creating and expanding humans bonds, about reaching beyond one's immediate surroundings, to embrace an even larger number of persons, other species and the biosphere."

Struggle for solidarity, she told the audience. "La vida es la lucha: to live is to struggle."

Some attendees commented that at the conference in Milwaukee they feel energized about the future of the church, but when they return home, they don't know what practical action they can take.

But Darrell Knuffle from Mancos, Colo., said Isasi-Diaz gave him something to take home and use.

"The whole notion of solidarity and her willingness to give us specific details about how we can take this home again and put it to work in our lives," he said. "By contrast, another speaker, that I will not name, was full of sort of platitudes without any specific connection to the life we all lead."

He's been to the annual conference for about the past eight years and every time, "I leave with enthusiasm and renewed determination."

Christine Krause and Mary Waters, both of Collinsville, Ill., also enjoyed the talk by Hardy.

"His was short, but very to the point, very powerful message … I had envisioned making three keys and hanging them on my door, so before I leave and before I come home, what did I do? Was I the jailer, was I the helper or was I the healer?" Waters said.

For Krause, "coming here is to rejuvenate what it is to be Catholic," in part because people here embrace her. As part of "a couple in a relationship with another woman, to see that 'yes, it is OK; yes, there are people who don't mind … who actually want us to be a part of the celebration. And that's what this weekend is to me -- it's a celebration."

That was a theme Manson noted near the end of her keynote, "If we continue to think creatively outside of the institutional church we will discover the myriad ways that we are already church -- in our work, in our families, in our volunteering, in our communities."

"Liberation from the margins of the church takes many forms. … There is no better way, or right way, no weaker way or stronger way. The only criteria is whether this work deepens our love for another, bring about the life of God more fully in our community and helps to attune or vision to see God's at work in our in our world."

Parish | Ministering to, ministering as 'the marginalized' theme of conference

Tips for a kid-friendly parish

At any moment, we can be meeting Jesus if we're alert

Atheists lose latest legal fight over 'In God We Trust'