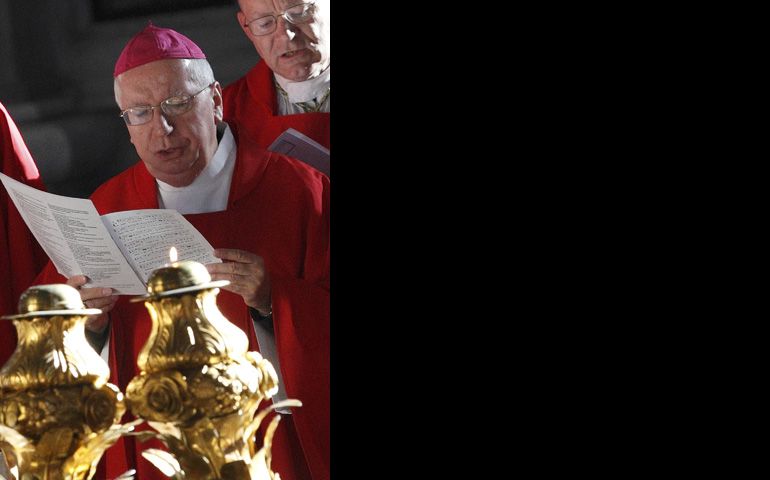 Bishop Cirilo B. Flores of San Diego prays in front of the tomb of St. Peter in April 2012 in St. Peter's Basilica at the Vatican. (CNS/Paul Haring)

Los Angeles Archbishop Jose Gomez was the principal celebrant for the Mass, sharing some memories of Flores' last days.

"I had the blessing of spending the last month of his life with him, and I can say that his main concern was always the people of San Diego and his family," Gomez said in his homily. "In my last conversation with him, that was his first question: 'How's everyone doing in San Diego?'

"He had a deep affection for all of you," he said, glancing around the full church. "He loved you like a father and like a brother.

"He understood that in God's plan, the bishop is ordained to make present the image of Jesus Christ. He wanted Jesus Christ to always be present to his people, so he went out to be with you as often as he could," the archbishop added.

At age 66, Flores was just days away from his first anniversary as the bishop of San Diego. His declining health surprised him, Gomez said, but he "was at peace."

"He put himself in the hands of God. What a beautiful way to live, and to die."

Gomez started his homily by pointing out that Flores' death was a blow to the people of the San Diego diocese and to his family and loved ones. "We are going to miss him a lot," he said simply.

But he quickly added that there was reason for great joy, too.

"Life is like a race that we are all running; the prize for the race is heaven, life for all eternity in our Father's house. Bishop Cirilo ran the race set before him with perseverance. He kept the faith. Now he is receiving his prize."

Flores' path to the episcopacy was a winding road. After spending a year in the Jesuit novitiate, the native of Corona, Calif., left to attend law school at Stanford University. A practicing lawyer for a decade, he thought he'd lost his chance to enter the priesthood, he said when describing his vocation journey.

But it wasn't too late. He entered St. John's Seminary in Camarillo, Calif., and was ordained a priest for the Orange diocese in 1991.

A much-loved priest in Orange County, Flores was ordained a bishop in March of 2009, cutting short a new assignment as pastor of Orange's St. Norbert Church. Less than three years later, he moved to San Diego to prepare for his new role as the shepherd of California's southernmost diocese.

After suffering a stroke during Holy Week of this year, Flores was more recently diagnosed with testicular cancer, and moved to the Los Angeles archdiocese to receive treatment. Less than a week before his death the San Diego diocese released the news that the bishop had widespread, aggressive and advanced cancer of unknown origin; the day after he returned to San Diego to enter palliative care, he died.

On Sept. 9, Msgr. Steven Callahan, former San Diego vicar general, was elected diocesan administrator. He will govern the diocese until a new bishop is appointed.

On the evening before the bishop's funeral Mass, a vigil was held at St. Joseph Cathedral in downtown San Diego.

In his homily at the vigil, Callahan began by recalling the words of Jesus to his disciples, "Where I am going, you know the way," and St. Thomas' reply, "How can we know the way?"

"Who of us could have known a year ago that, in a few short months, Bishop Cirilo would undergo a stroke, cancer would be discovered and he would die so quickly?" Callahan asked. "Who of us can know the way, the events that will unfold in our own lives?"

He continued, "Jesus is the way. In Him, we know. In Him, we discover the path that leads to fullness of life."

Noting that Flores is now "set free" from sickness and death, Callahan said, "We long for the day when we will be reunited with our brother Cirilo and all our beloved who have gone before us, and united in love with our God forever."

[Elisabeth Deffner is editor of OCCatholicNews.com, the online publication of the diocese of Orange. Contributing to this story was Denis Grasska, assistant editor of The Southern Cross, newspaper of the San Diego diocese.]