New beef about revisions in the revised Roman Missal 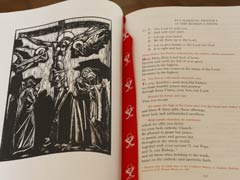 The new English translation of the Roman Missal is seen in Rome April 29. (CNS/Paul Haring)

A new beef is making the rounds about the many changes that were introduced into the revised English translation of the Roman Missal between its adoption by the U.S. bishops in 2008 and its approval in its supposedly final form by the Vatican in 2010.

On www.praytellblog.com, Benedictine Fr. Anthony Ruff, a liturgy professor at St. John’s University in Collegeville, Minn., reported Oct. 31 that he had obtained a leaked copy of a “report prepared for [English-speaking] bishops’ conferences to make them aware of the problems in the 2010 received text.”

“The report goes on for dozens of pages,” Ruff said. “Thirteen chapters with titles like ‘Change of Meaning from the Latin Original’ and ‘Mistranslation of the Latin’ and ‘Additions of an Element Not Found in Latin’ and ‘Omission of an Element Found in the Latin’ and ‘Introduction of a Theological Problem’ and ‘Difficulty with English Grammar or Usage.’ ” Each chapter has subchapters with detailed references to how the 2010 text has departed from the 2008 text -- and in the process, from the Vatican’s own translation norms for liturgical texts, he said.

“The scope of the debacle is simply mind-boggling,” he said.

As a “small sampling” of the changes found in the 2010 version, he said:

“Thankfully, the final text of the English missal is undergoing further revision in Rome,” Ruff added. “We don’t yet know whether the revisions are minor touchups merely to prevent the worst howls of objection, or a fundamental reworking that gets to the heart of the problem and offers a truly excellent product to the English-speaking church.”

Two days earlier Ruff wrote, “Several sources confirm today that the Holy See is making changes to the 2010 received text of the new English missal. Seems they’re responding to the outcry about grammatical errors, mistranslations, poor English usage, and the like.”

Back in September another Web site, www.whatifwejustsaidwait.org, reported, “Even after Pope Benedict XVI gave his approbation to the new texts [last April], more than 10,000 changes were made to the ‘final’ draft. These changes were made without consultation with our bishops or even with ICEL [the International Commission on English in the Liturgy]. According to some who have seen them, the changes are arbitrary and do nothing to improve the quality of this already greatly compromised text.”

The What If We Just Said Wait Web site was started by Fr. Michael Ryan, a prominent Seattle priest, as a plea to hold off nationwide implementation of the new English version of the Roman Missal until it has undergone pilot testing for a year in some parishes and other settings, allowing feedback on how it is received and whether it could be improved. More than 21,000 people have signed his petition.

The Pray Tell blog Oct. 17 ran an analysis by Xavier Rindfleisch of some of changes that were made between the 2008 submitted text and the 2010 received text -- including some of those cited in the lengthy report that has been sent to English-speaking bishops’ conferences.

He said that among the 2010 changes “there are odd and sometimes embarrassingly erroneous departures from accepted English usage.”

Rindfleisch noted that before the words of consecration, the Latin rubric for the celebrant says, “Parum se inclinat” -- translated into English in the 1974, 1998 and 2008 English translations from ICEL as “He bows slightly.”

In the 2010 version from Rome, however, “inexplicably, in both consecrations of every eucharistic prayer, ‘He bows slightly’ has been changed to, ‘He bends slightly,’ ” Rindfleisch said.

“Bends?” he commented. “Is this word ever used in a liturgical setting?”

When NCR e-mailed Ruff to ask if Xavier Rindfleisch was a nom de plume playing on Xavier Rynne, the famed 1960s pseudonymous author (the late Redemptorist Fr. Francis Xavier Murphy) of articles in The New Yorker that revealed the inner workings of the Second Vatican Council, Ruff readily acknowledged that this was the case. Rindfleisch -- pronounced with a short “i” in Rind-, like the “y” in Rynne -- is the German word for “beef.”

Ruff said he was not the author of the article. “All I did was confirm the truth that he has the citations correct from the 2010 text. ... I absolutely cannot give the name of the author,” he said in an e-mail.

Fr. Paul Turner, a pastor in Cameron, Mo., and a well-known liturgical consultant, said it is clear that with its 2001 document Liturgiam Authenticam, the Vatican Congregation for Divine Worship and the Discipline of the Sacraments signaled a more active role in determining final translations of liturgical texts.

“It was not just a review of the translation rules, but also how the final decisions would be made,” he said.

Fr. Richard B. Hilgartner, associate director of the U.S. bishops’ Secretariat of Divine Worship, said blog reports claiming there are 10,000 changes from the 2008 text to the 2010 text “might refer to the number of words that have been changed, if anything,” but almost certainly not to the number of phrases or sentences or entire prayers in which changes have been made.

The Holy See has ultimate authority over liturgical texts and it’s “not unheard of” for the worship congregation to make changes before giving approval to a text, he said. “Liturgiam Authenticam leaves to the congregation the right to actually impose a text,” as well as to edit texts approved by bishops’ conferences, he said, citing Paragraph 80 of the document.

The origins of the 2010 changes from the missal translation sent to Rome by the U.S. bishops would be hard to trace, Hilgartner said, because many may have come not just from congregation officials or consultants, but from requests from bishops’ conferences around the world or from Vox Clara, an international advisory group of English-speaking bishops and scholars established by the congregation to assist it internally in its work.

In every segment of the new missal that the U.S. bishops sent to Rome, they included requests for modifications in the ICEL text, Hilgartner said.

Referring to the blogs on the Vatican’s extensive changes from the 2008 text to the 2010 text, Turner said, “What we’re hearing is that the congregation has made some very aggressive changes to it rather than accept the work that had gone on before.”

“If the basic charge is true,” he said, “then yes, I think there should be a concern about the process” even while recognizing the congregation’s right in church law to make such changes.

Parish | New beef about revisions in the revised Roman Missal

Catholic schools in US hit by unprecedented enrollment drop

Parishes grow only when people are welcomed, heard, pope says