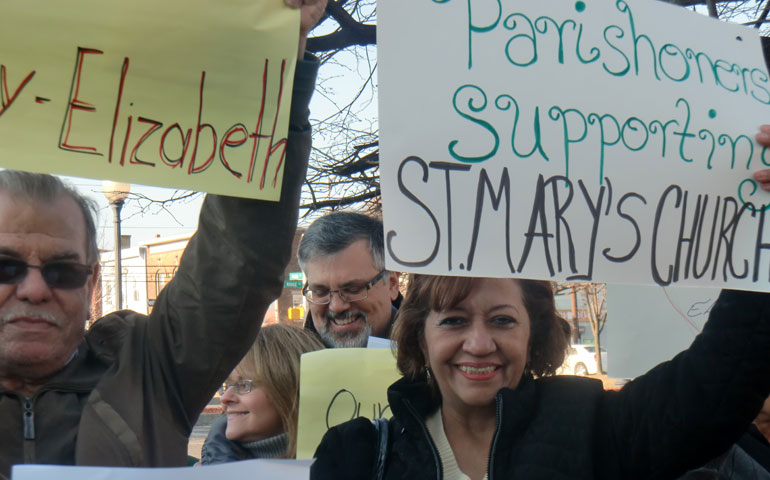 About 150 parishioners from St. Mary of the Assumption Parish in Elizabeth, N.J., traveled by caravan Jan. 6 to Sacred Heart Cathedral here in an effort to reverse an order by Archbishop John Myers that the four priests living in their parish rectory vacate this month.

The archbishop's order -- which parishioners view as an eviction notice and a summary dismissal of hard-working clergy without recognition of their longtime contribution to the church and the people of Elizabeth -- was delivered to three of the priests by telephone the week before Christmas.

The pastor, Msgr. Robert Harrington, 67, said he received a letter from Myers in July notifying him that he was to leave at year's end for health reasons.

"I have no idea why they wanted to clean house on the others," he told NCR by telephone Jan. 6, while packing his belongings. Later this month he will move to Brighton Gardens assisted living facility in Mountainside, N.J.

The priest, a diabetic, is a partial amputee. He lives in a rectory attached to the church, has a hospital bed, an elevator outside his bedroom, a motorized wheelchair and an altar that local firemen made accessible. He also has a handicapped accessible car and remains, according to parishioners who rallied outside the cathedral, the catalyst and inspiration behind many of St. Mary's ministries. These include feeding the poor, sheltering the homeless, visiting those in prison and in the Federal Detention Center in Elizabeth, and aiding those affected by Hurricane Sandy and the earthquake in Haiti.

Jim Goodness, communications director for the Newark archdiocese, pointed to the pastor's "severe health conditions" and to financial concerns as reasons for bringing in a new administration. Two parochial vicars have been appointed and a pastor will be named in the coming weeks, Goodness told NCR. Myers has placed Fr. Charles Kelly as St. Mary's temporary administrator at this time.

Goodness said two of the priests who've been asked to leave -- Fr. Jack Martin and Fr. Pat Donohue -- are retired, and a younger priest, Fr. Esterminio Chica, has been reassigned. Goodness added that retired priests receive an archdiocesan pension and can choose where they want to live -- "a condo, apartment, with family." They do not have to live in a priests' retirement home, he said.

St. Mary's is one of 11 Catholic parishes in Elizabeth, New Jersey's fourth-largest city, which has 125,000 citizens. Begun in 1844 by Irish immigrants, the parish is the oldest in Union County. Today many of its 900 parishioners are factory, port, airport and transit workers who hail from several countries in Central and South America, the Caribbean and the Philippines.

The parish had an elementary school as well as a high school, whose total enrollment once reached 800 pupils. Some years ago, the grammar school was merged with two others in Elizabeth and the high school population has fallen from about 300 students to 125 today. The parish also includes a convent of 10 retired Sisters of Charity, the congregation that served St. Mary's for over a century.

Harrington spoke of a previous vice principal at the high school, now deceased, who was a prolific fundraiser and who helped procure almost a million dollars for the school. The former pastor, Msgr. Paul Bootkoski, now bishop of Metuchen, N.J., told the vice principal to place the money in three separate portfolios, Harrington said -- one for tuition aid, another for teacher enrichment and one for capital expenses.

According to Harrington, "The money was never in Msgr. Bootkoski's time or in mine reported to the archdiocese."

"The money is for the high school," he said. "It's not something we ever tapped into to pay parish bills."

During the last 22 years, the parish has subsidized the high school with "zero dollars," Harrington said. All of the school's expenses have been met by the special fund, by fundraisers and by tuition, which at $1,400 per student is the lowest in the county, he said.

Harrington, who has been St. Mary's pastor since 1990 and a priest for 41 years, said he has been unable to get Myers to sit down and talk with him. "He won't see me, he won't take my calls, but I have a paper trail from him that goes on forever."

He said that none of the priests or the parish's three deacons had anything to do with the rally outside the cathedral nor with a press conference that parishioners also held outside the Archdiocesan Center Jan. 3. Both were initiatives organized by parishioners, he said.

For some two hours, parishioners and their supporters -- from local Voice of the Faithful, Pax Christi and other urban and suburban groups in the archdiocese -- processed around the two-block-long cathedral seven times, recalling the Old Testament story of Joshua's troops marching seven times around Jericho.

They carried placards asking that the priests be allowed to stay in the rectory and that the parish's 65 ministries and outreach programs be able to continue.

The group prayed in English and Spanish, translating each other's prayers into a megaphone after each lap around the cathedral, the archbishop's residence and the chancery.

"We want the bishop to open his heart and talk to us," parishioner Maritsa Jaramillo said.

"I'm disappointed as a Catholic and as a catechist how this was handled," she told NCR. "We are more than the buildings and the property; we are the church."

The marchers carried a list of five requests. Among them was the call for a formal response and dialogue between the archdiocese and representatives of St. Mary's parishioners to begin by Jan. 13. Although no parish representative had heard from anyone in the chancery by the time NCR went to press, many remained hopeful.

"If there are financial problems, the priests are part of the solution," parishioner Dominic Iorio said. "You don't solve anything by evicting them."

Martin, who will leave Jan. 31 after eight years at St. Mary's, said he's still praying over offers to live at four other rectories. "When you're bilingual and receive a monthly pension, you get a lot of invitations," he said, noting that he'd also gotten 20 offers from parishioners to live in their homes. "I know I'm not going to be sleeping in the train station or hospital lobby."

Martin, 75, said he retired last February so that his pension could help the parish budget. He said Harrington is one of the church's biggest donors. "He's putting his own money into the collection."

When asked whether there would be an investigation of the parish's finances once all the priests left, Goodness said: "These are personnel issues. I can't answer that now."

A version of this story appeared in the Jan 18-31, 2013 print issue under the headline: Parishioners protest priests’ ouster.