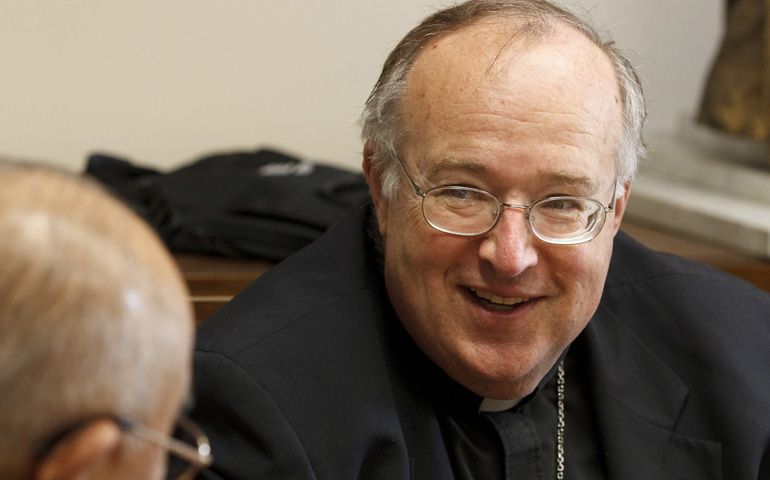 Many U.S. Catholics want the church to "banish judgmentalism" of people in its ministries and to focus instead on getting close to them and understanding the struggles they face in their lives, the new bishop of San Diego said.

In an almost hourlong interview with NCR, Bishop Robert McElroy said while people want to be challenged by Gospel teachings, they are looking for a church that has "a sense of accepting people where they are and helping them to come farther."

"People want standards; people want the challenge of the Gospel," said McElroy, who was installed as the new leader of the San Diego church in April.

"They don't want it diluted, but they are so grateful that it is encased with Pope Francis in a very clear message that people aren't expected to be perfect," he continued. "They're called to do the best they can in the circumstances in which they find themselves -- which are often very, very challenging in people's lives."

McElroy, who had served as an auxiliary bishop in San Francisco since 2010, said he has gotten a sense of people's desires for the church as he is undertaking parish visits in his new diocese to introduce himself to people and learn about their work and needs.

The bishop said he has visited about a third of San Diego's approximately 100 parishes and met with around 1,250 people in the diocese individually or in small groups.

"When they speak about the contribution that Francis is making in their view, it draws very much from the type of spirituality of St. Francis of Assisi, which is so core to this pontificate," McElroy said.

"A sense of mercy, a sense of joy, a sense of accepting people where they are and helping them to come farther, taking the next step in the light of the Gospel, but really trying to banish judgmentalism," he said.

The bishop also spoke about his excitement for his new role, the implications of the pope's new encyclical on environmental issues, the upcoming Synod of Bishops on the family, and the direction of the U.S. bishops' conference.

McElroy said the U.S. bishops' recent annual spring meeting in St. Louis saw the bishops ask themselves: "How do we take seriously the directions that Pope Francis is leading us toward in terms of transforming the life of the conference?"

"Some of that inertia is good because it has to do with ongoing pastoral priorities within the life of the church, and they're structured and have to be attended to," he said.

"But how do you recognize that that inertia ... is validated but at the same time transform it with some of the vision of Pope Francis?" he asked.

A theology of mercy

McElroy used the example of how the last three popes have used mercy as a way of understanding God's relationship with humans when addressing the upcoming meeting of the Synod of Bishops. The synod will be the second in two back-to-back global meetings of prelates called by Francis to address issues of family life.

"I think it's important that there's a real trajectory there," McElroy said, connecting teachings on mercy by Popes John Paul II, Benedict XVI, and Francis.

"What the theology of mercy is saying is that the essential attribute of God in relation to us -- and for us to understand who is God -- is that of mercy," he said. "And that God is innately merciful and can do no other than to be merciful, because that's at the core of who God is."

That understanding of God, McElroy said, "will be the prism through which so much of the discussion occurs" at the synod.

But the bishop said there will also be a tension at the synod between mercy and a kind of "cheap grace" that "leads to a sense of complacency and not trying to struggle with, wrestle with, the challenge of the Gospel in our lives."

"I think that is the central dilemma that this synod is going to have to deal with, in terms of diverse opinions," he said. "How do you emphasize the mercy of God at every key point and at the same time not let it become a distorted sense of mercy that legitimates and supports complacency?"

Something that may help bishops at the synod in their discussions, McElroy said, is the theological notion of graduality.

"What that says is that many times, people in their lives cannot embrace the fullness of the Gospel at a given moment," the bishop said. "They need to take steps toward it."

He identified a possible question for the synod members: "How do you have the mercy which acknowledges that, supports that, and doesn't make people feel terrible that they're not at the fullness of acceptance -- or even halfway toward acceptance -- of this area of the Gospel that they're finding hard to live out in their life?"

McElroy, 61, is a San Francisco native who served as priest-secretary to former San Francisco Archbishop John Quinn, vicar general of the archdiocese, and pastor at a San Mateo, Calif., parish for 15 years.

He also has doctorates in both theology and political science: He earned the first from the Pontifical Gregorian University in Rome and the second from Stanford University.

The bishop said while he will miss his friends and associates in northern California, "it's just been exhilarating to me to come to see a different community [and] encounter them."

During his visits to his new parishes, McElroy said he usually meets with each of the priests at each parish for about 40 minutes before meeting individually or in small groups with members of the parish staffs and with volunteers who help in the communities.

Those meetings, he said, help him in two main ways: "in my ability to be a leader within this diocese in that I come to know the distinctiveness of those parish communities, and also to, in that kind of conversational mode, get to a level of frankness with people and understanding from them about what are the challenges they face as Catholics."

"I come away with a renewed sense of how many people there are in the life of the church who are really committed to the Gospel and to making it alive within the church community," the bishop said.

"There's just a myriad of very significant ways in which people are forming parish," he continued. "It renews my sense of how different parishes can be in a wonderful way."

McElroy said he sees the center of his ministry as being a parish priest and that his parish visits help him to experience parish life "in the way I've always felt it as the center of priesthood and of being a bishop."

"I always wanted to be a parish priest, from the very beginning," he said. "To me, my service in other areas ... whether within academics or in administration, were detours from that."

McElroy said he thought Francis' example to bishops of how they should perform their ministry is following the example of Christ in many of the Gospel stories.

"When Christ in the Gospels encounters people who are troubled in various ways, he doesn't sit down and give them a lecture first on what the truth is or on the fullness of the Christian life," he said. "He first embraces them ... with the love of God."

After that, McElroy said, Christ "works to heal what it is that is impeding them in their life from peace and contentment, and, many times, the ability to live of the Gospel well."

"Then, finally, [Christ] speaks about changing their lives," he said.

The soul of the encyclical

McElroy also expressed high praise for Francis' new ecological encyclical, "Laudato Si', on Care for Our Common Home," calling it a "very powerful and skillful unveiling" of the church's teachings on the created order and a "a call for bold conversion on the whole set of issues."

He said at the soul of the encyclical rests a deep spirituality, and it offers an important message to humanity about how we should measure progress in our societies.

The encyclical, he said, warns us against seeing the world "as an object to be conquered." He also said it criticizes a paradigm where the first analysis of any question is what economic impact it might have.

McElroy said starting from such an economic paradigm "chases all the other values -- the values of ethics, the values of solidarity in society ... to the margins because it presents all the answers from a purely economic framework."

In terms of what impact the encyclical might have on the life of the church or in the political realm, the San Diego prelate said he thinks "it gets a second hearing out of people."

"I think there will be a significant number of people who will listen more attentively and more openly on those sets of questions as a result of the encyclical," he said.

"I thought one of the really wise characteristics of the encyclical is its inductive nature," McElroy said. "It did not have a set of truths and then deduce from them realities touching upon the question of climate change."

He drew a parallel between the encyclical and the Second Vatican Council document Gaudium et Spes, saying that Laudato Si' is "talking about the signs of the times out in the world -- particularly the environmental world now -- and then inviting people to be part of an international dialogue on it.

"It was very open in that regard," he said. "It was dialogical and it was not didactic."