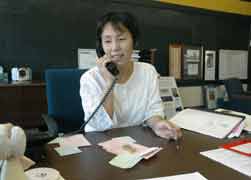 Sr. Anji Fan, a native of China and a member of the Sisters of Providence of St. Mary-of-the-Woods, Ind., answers the phone in 2007 at Providence Cristo Rey High School in Indianapolis, where she volunteered during the summer. (CNS photo/Sean Gallagher)

WASHINGTON — U.S. Catholic religious communities are attracting more ethnically and culturally diverse members now than in previous generations, according to an in-depth survey of 4,000 men and women who are in formation or newly vowed members.

The "Study of Recent Vocations to Religious Life" also showed that most U.S. religious communities report diminishing numbers with aging populations, but at the same time indicated those who are choosing religious life today are passionate about it and some orders are cultivating vocations from the millennial generation.

With less than 10 percent of women religious and 25 percent of men religious under the age of 60, it's imperative that U.S. religious communities figure out effective methods of recruitment, said Mercy Sr. Mary Bendyna, executive director of the Center for Applied Research in the Apostolate and principal author of the study.

The study was conducted by CARA, a Georgetown University-based research center, on behalf of the National Religious Vocation Conference, based in Chicago. It surveyed 4,000 men and women who are in formation or newly vowed members.

The study results are available at www.nrvc.net.

"The Internet, DVDs and other media are much more important to this generation, than for those who were connecting to the religious communities in the 1990s," Bednarczyk told CNS. "Religious communities definitely have to be present on the Web to connect with their target groups."

Though the numbers in religious orders may be decreasing, the study found that new members are passionate about religious life and that men's and women's communities following more traditional practices have better success attracting younger members today.

Another encouraging sign is that 43 percent of those surveyed are under the age of 30, meaning U.S. religious communities are reaching the millennial generation, Bednarczyk said.

"It confirms that younger people are rethinking entering religious life," he said.

CARA mailed surveys to a total of 976 entities in spring 2008 and then conducted extensive follow-up by mail, e-mail, telephone and fax throughout summer and fall 2008 to achieve a high response rate. CARA received completed responses from 591 religious institutes for a response rate of 60 percent.

The study was designed to identify and understand the characteristics, attitudes and experiences of the men and women who are entering religious life today as well as the characteristics and practices of the religious institutes that are successfully attracting new candidates and retaining new members, the summary said.

Though about 94 percent of members of U.S. religious communities who have made their final profession are white, a growing number of those in formation come from non-Caucasian backgrounds, according to the study.

Approximately 21 percent of those in initial formation are Hispanic/Latino, 14 percent are Asian/Pacific Islander, and 6 percent are African/African-American. About 58 percent are Caucasian/white.

Currently, about 75 percent of professed men in U.S. religious communities and more than 91 percent of women religious are 60 or older, the study said.

A majority of both men and women religious under the age of 60 are in their 50s.

"Both the world and the church have changed dramatically from when many of us first entered religious life," Bednarczyk said.

Candidates are going to come from this changed world and church, he said. "No matter what we may think of this younger generation, their spirituality, their hopes and their values, we cannot ignore them if we want a future."

According to the survey of new members, the average age for entering religious life is 30 for men and 32 for women.

New members told surveyors they were most attracted to religious life through various media, especially Web sites, and were drawn to programs that offered discernment retreats, "come and see" experiences, discernment groups and ministry/mission experiences.

Data from the study suggests that religious institutes with vocation directors engaged in vocation ministry on a full-time basis tended to be more successful in attracting new members.

Though 88 percent of U.S. religious institutes reported having vocation directors, only 46 percent said those men or women spend more than half their time fostering vocation recruitment.

The total of new members in U.S. religious communities is probably higher than the 4,000 surveyed, since some religious institutes did not respond. The study's findings did not include diocesan priests.

Bendyna sees as a positive sign the mere fact that men and women are choosing religious life at a time when it is not as popular or as understood as it once was.

"They face many challenges and are making a choice that family and friends don't understand," Bendyna said, "but they are embracing their call with faith and enthusiasm."

Felician Sister recognized for ministry to indigenous in Canada