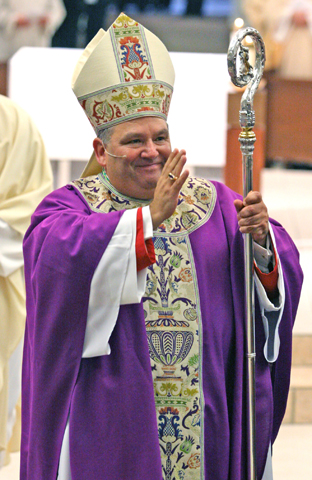 Newark, N.J., Archbishop John Myers said Tuesday that Pope Francis had appointed a new coadjutor archbishop of his archdiocese at his request in order to assist in several ongoing archdiocesan programs.

Myers said at a press conference Tuesday morning that appointment of Bernard Hebda as the effective archbishop-in-waiting for the New Jersey archdiocese meant the pope "has honored my request and honored the archdiocese of Newark."

While it is common for bishops of large dioceses to be assisted by one or more auxiliary bishops, a coadjutor bishop is usually appointed when a current bishop needs significant help in his ministry.

Myers, who attracted extensive media attention in the spring after a local newspaper revealed that a priest who was under court order not to minister to minors was helping with youth ministry in a parish, said Tuesday that Hebda was appointed to particularly assist with "strengthening" of Newark's Catholic schools and developmental efforts and in addressing coming demographic changes.

"Archbishop Hebda and I have long known each other," Myers said at the press conference, according to remarks provided by the archdiocese. "I happily look forward to our increased collaboration for the benefit of the faithful of the archdiocese of Newark in the years ahead."

Hebda said at the press conference he had "known and respected" Myers and "welcome[d] this opportunity to assist him as he shepherds this large and complex archdiocese."

Hebda also said he was grateful to the pope for giving him what he called a "coadjutor's cushion" -- "an opportunity to experience the vitality of this local church and its challenges before ever being placed at the helm."

"I hope to take advantage of this blessing to the fullest extent possible, getting to know our parishes, schools and institutions, the vibrant threads that form the fabric of this archdiocese," he said.

Myers is 72, putting him about three years away from mandatory retirement. He has been a bishop for 26 years and archbishop of Newark since 2001.

In the past months, Myers has been faulted for not supervising Fr. Michael Fugee, whom he installed in restrictive ministries despite the court order for the priest not to minister to minors. Fugee has since been removed from ministry and arrested for violating his court agreement.

Myers was back in the news in August with the announcement that the diocese of Peoria, Ill., had settled a case of childhood sexual abuse by a priest for $1.35 million. The case against Msgr. Thomas Maloney stemmed from the time Myers was bishop in Peoria.

According to media reports of Tuesday's press conference, held at the Newark archdiocese's chancery, Myers declined to answer questions regarding when he had asked the pope to appoint a coadjutor to Newark.

"I don't think I need to talk about my conversations with Rome," Myers said, according to New Jersey's Star-Ledger newspaper.

Hebda was appointed bishop of Gaylord in 2009. He was ordained a priest for the Pittsburgh diocese by then Pittsburgh Bishop Donald Wuerl in 1989. Wuerl is now a cardinal and archbishop of Washington, D.C.

The Newark archdiocese covers 511 square miles over four counties in New Jersey and has a total population of 3.08 million people, with 1.42 million, or 46 percent of them, Catholic. The archdiocese has about 600 diocesan and 160 religious priests and about 220 parishes.

The archdiocese has scheduled a Mass of Welcome for Hebda on Nov. 5.