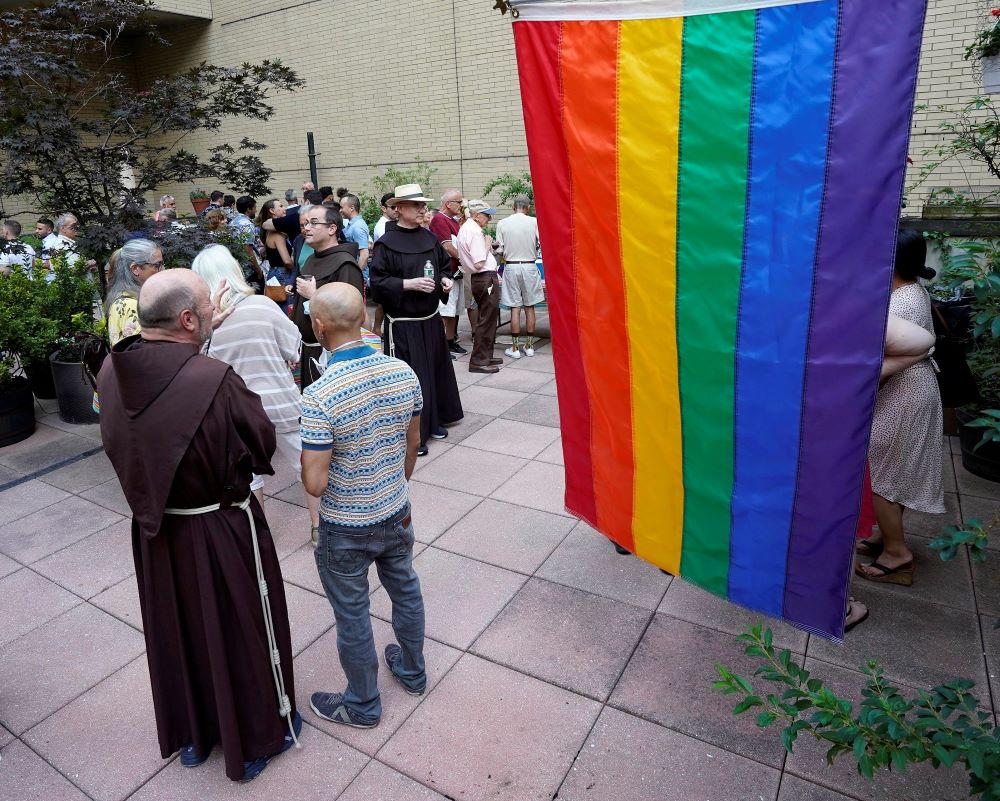 Franciscan friars of St. Francis of Assisi Church in New York City and members of the parish's LGBTQ ministry gather at a reception following an annual "Pre-Pride Festive Mass" June 26. The liturgy is traditionally celebrated on the eve of the city's Pride march. (CNS/Gregory A. Shemitz)

Linda Karle-Nelson says that $5,000 isn't much, but it's enough to make a statement of support for LGBTQ people who have been fired from their jobs in the Archdiocese of Detroit.

In September, Families with Dignity, a support organization based in Detroit, started Love Always Wins (LAW), a fundraising campaign to help support LGBTQ people and allies who have lost jobs in Catholic parishes or schools in the archdiocese.

In 2020, Families with Dignity identified five people who had lost their jobs. Karle-Nelson, like other members of the leadership team, wanted to do something "to make a statement and to offer support."

"These people have given so much to the church and to their parishes and their schools, and they're being thrown out," Karle-Nelson told NCR. "They're not baggage. They're people that we value."

The help, however, is needed. New Ways Ministry reports that, since 2007, more than 100 church workers have lost their jobs in LGBTQ-related employment disputes. The Catholic LGBTQ advocacy organization has compiled a national list of workers in Catholic institutions who, according to media coverage, have been fired, forced to resign, had offers rescinded or had their jobs threatened because of LGBTQ issues. The list includes 11 incidents from 2019, five from 2020 and two so far in 2021.

Francis DeBernardo, New Ways' executive director, told NCR it's "amazing that an independent group has taken it upon themselves to do the work of the church."

"This group has been faithful and courageous for decades now," DeBernardo said of Families with Dignity. "They've withstood a lot of pressure from church leadership but they remain steadfast in their staying power and in their ability to find new and creative ways to fight injustice and to help people."

"They are being the church because they're doing the works of mercy," DeBernardo added.

Linda Tomala, a member of Families with Dignity who donated to the fundraising campaign,  said she knows LGBTQ people in the Detroit archdiocese who lost their jobs because of their sexual orientation. Hearing their stories made her "disheartened, disappointed, disgusted and angry."

"I find that so unfair and appalling," Tomala told NCR. "I donated as soon as Families with Dignity announced the fundraiser. It's a practical action that I can take to support these people."

Tomala noted that she would have been willing to donate through her parish to LGBTQ parishioners who had lost their jobs, but, after being reprimanded by the bishop in 2020, such collections aren't allowed.

"We can't do anything," Tomala said.

Karle-Nelson, whose son is gay, has long advocated for LGBTQ dignity in the church. She has been a member of Parents, Families and Friends of Lesbians and Gays (now known as PFLAG) since the early 2000s. Karle-Nelson and her husband were invited to join the board of Fortunate Families, a nationa Catholic organization dedicated to supporting the parents of lesbian, gay, bisexual and transgender children, in 2006.*

Dignity Detroit, a LGBTQ group that held masses in the Archdiocese of Detroit, was also kicked out of diocesan spaces.

'People aren't being fired for using contraception or being divorced or cohabitating or having premarital sex. A special case seems to be made for certain kinds of violations rather than others.'

"It is essential that the Church not seem to condone Dignity Detroit's competing vision for growth in holiness," a letter from Bishop Battersby read. "While elements of that vision, such as Dignity Detroit's outreach to the poor, are commendable, the organization's rejection of the Church's teaching on chastity is incompatible with the path of sanctification on which Christ bids his church to travel."

Some ethicists say that banning groups from church spaces and firing individuals from their jobs is alienating and painful for those who are targeted.

Julie Hanlon Rubio, a professor of Christian social ethics at Santa Clara University's Jesuit School of Theology, said that, while there's a case to be made for encouraging Catholic employees to live in a way that's "consistent and ethical" with Catholic teaching, choosing to fire employees for their sexuality is problematic.

"Think of all the ways that people violate Catholic social teaching," Rubio said. "Engaging in ecological sin, giving into the vices of greed and luxury, there are so many ways that we all fall short."

Rubio said LGBTQ people appear to be singled out for violating Catholic teaching.

"People aren't being fired for using contraception or being divorced or cohabitating or having premarital sex," she said. "A special case seems to be made for certain kinds of violations rather than others."

Rubio said she saw the pain of these firings firsthand when a former student was fired from a Catholic institution for being LGBTQ. Rubio hopes that the church will imagine new ways to encourage Catholics to live consistently with all church teaching — not just sexual ethics —  perhaps during the recently opened two-year process for the Vatican's Synod of Bishops.

Karle-Nelson said she hoped her organization's fundraiser can serve as "a role model for actions and programs which call attention to these dismissals and cause church leaders to think again about the message they are sending."

Until the firings stop, Families with Dignity plans to continue raising funds.

"We would love it if the program is a one-time venture, and no more teachers or ministers get fired because they are LGBTQ or allies," Karle-Nelson told NCR.

However, she fears otherwise. Although the first phase of their program is completed, "Our fundraising is not closed," she said.

*Editor's Note: This story was updated after initial publication to correct the year in which Linda Karle-Nelson and her husband joined the board of Fortunate Families.