by Mark I. Pinsky
Parish 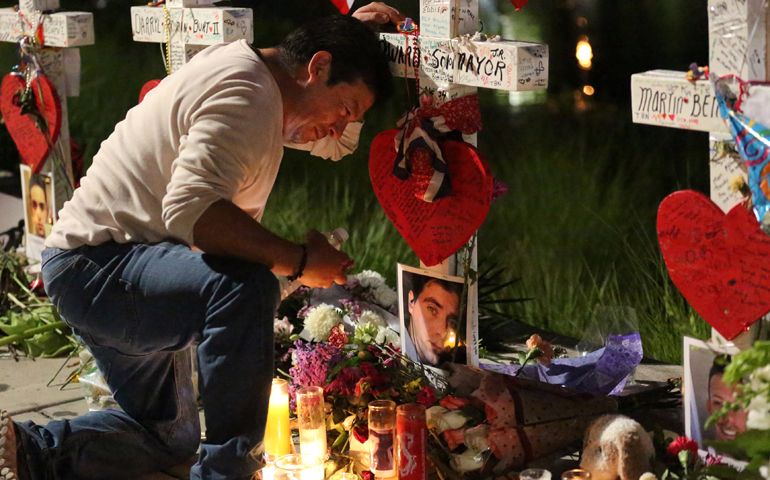 Jose Louis Morales cries as he kneels June 21 at a makeshift memorial for his brother Edward Sotomayor Jr. and other victims of the Pulse night club shootings in Orlando, Fla. (CNS/Carlo Allegri, Reuters)
This article appears in the Orlando shooting feature series. View the full series.

Orlando, Florida — Culminating a week of civic trauma in the wake of the June 12 murder of 49 people at Latin Night at a gay dance club, an estimated 50,000 people joined a June 19 march from the downtown Cathedral Church of St. Luke to nearby Lake Eola for a candle-lit vigil. Many carried signs with the city's new, tragedy-born symbol: a rainbow heart with the words "Orlando Strong" and "Orlando United."

Earlier in the day, Fr. Paul Henry looked out at 1,500 Catholic worshipers at Mass and addressed the question on the minds of the faithful.

"Why does God let something like this happen?" Henry asked, from the pulpit of Basilica of the National Shrine of Mary, Queen of the Universe. "We have no answers."

Battered by the shooting, the people of Orlando have been struggling to preserve the fabric of their increasingly diverse community.

"A sword has pierced the heart of our city," said Orlando Bishop John Noonan in a message to the city's other religious leaders hours after the shooting.

Noonan has been in the thick of interfaith responses to the shootings, asking approximately 90 parishes and missions to include prayer intentions for the dead and injured during Sunday Masses June 12 and again on June 19.

Undeniably, it was a horrendously violent week in Central Florida. On June 10, The Voice singer Christina Grimmie was shot at close range and killed after a local concert. Her assailant was tackled and shot himself to death. In the early hours of June 12, a lone gunman, later identified as Muslim, killed 49 mostly Latino patrons of the Pulse, and wounded 53 others, before he was shot to death by police. Finally, on June 14, two-year-old Lane Graves was snatched by an alligator from a beach behind a Disney resort, and was later found drowned.

As funerals for the Pulse victims began the weekend of June 18 and vigils continued, worshipers at services throughout Central Florida grappled with how to cope with evil and madness and tragic happenstance. Many, both in the pulpit and the pews, observed that, for the gay community, clubs like Pulse are similar to faith communities: safe, almost sacred spaces, and, for many, sanctuaries.

Time magazine's cover story on the shootings said they rested on the pillars of the decades-old culture war: "Guns, God and Gays." The murders at Pulse mobilized clergy across the religious spectrum, ministering to the wounded and the bereaved, while desperately trying to keep fissures of faith, ethnicity and sexual orientation from fracturing. Individually and collectively, they were determined not to permit the victims to be marginalized, nor those who shared the shooter's faith to be demonized.

The youngest fatality of the Pulse shootings was Akyra Murray, 18, a recent graduate of West Catholic Preparatory High School in Philadelphia. She and her family were in Orlando to celebrate her graduation. Authorities said Murray was shot in the arm, but bled to death during the three-hour siege.

Initially, there was some confusion about how many of the victims were Catholic. Many assumed that because most at the Pulse were Latino, they were probably Catholic. However, many Hispanic churchgoers in Central Florida attend evangelical or Pentecostal congregations.

"We don't know who they are or what they are," said Noonan in the days following the shooting. "These are people, children of God."

Orange and adjoining Osceola counties have experienced dramatic increase in Spanish-speaking newcomers over the past decade, the largest number from Puerto Rico, but also immigrants -- some undocumented -- from throughout Latin America. More than half of Orange County residents are now Spanish-speaking. An estimated 40 percent of the diocese's 400,000 members are Spanish-speaking, as are 35 of its 100 priests.

Simultaneously, Central Florida's gay community has also expanded, many members finding jobs at area theme parks. Along with numerous professionals and business owners, they have become a significant economic and political force, finding wide acceptance. Similarly, Muslims have also found a home in the Orlando area. Both groups have wide circles of friends, neighbors and co-workers in the greater community.

Regardless of the victims' faith or orientation, the Orlando diocese was well-prepared for such a disaster, and was quick off the mark at the first news of the shooting. Noonan, who lives a few blocks from Pulse, turned around from a bishops' meeting in California and mobilized his staff.

They had already had some preparation: A year ago, a priest who had assisted in ministering to families following the 2012 elementary school shooting in Sandy Hook, Conn., came to Orlando to brief priests, staff, and lay leaders on crisis and grief counseling.

Orlando Regional Health Center, the hospital near Pulse that received the dead and wounded, is covered by the downtown staff of St. James Cathedral through its Ministry to the Sick. In addition to the Catholic chaplain on duty, other priests drove to the hospital and the hotel and city senior center across the street, where friends and family of the shooting victims gathered for information and counseling.

The diocese, together with Catholic Charities of Central Florida Catholic, dispatched priests, deacons and staff members to aid centers established by the city, what Noonan called "the front lines of this tragedy." Later, priests offered to conduct funerals when invited by families.

The death of so many gay and Hispanic young people has sent reverberations well beyond these two groups, into the largely straight, white and English-speaking suburbs.

At the Congregation of Reform Judaism, a regular Friday night service hurriedly designated a "Shabbat Service of Inclusion, Unity & Healing" had to be moved from the chapel to the main sanctuary in order to accommodate more than 75 worshipers.

Among the speakers from the congregation was a member of both the Orlando Gay Chorus and the synagogue choir, and his husband, who were married at the synagogue; a parent and her transgender son; another parent who spoke about her reaction when her gay son came out decades ago; a Hispanic family that recited a prayer in Spanish and another, raised in Puerto Rico, who sang a song in Spanish about "when a friend goes away."

There was also anger in the pulpit, and determination.

"There are no words that haven't been said, no sympathies that haven't offered, no platitudes that haven't been verbalized … again," she said. "We were stunned by Columbine. Little did we know that that was only the beginning. And now, the madness has come to live in our own backyard, and we are still stunned, but no longer surprised.

"The rhetoric is the same, the script is the same: anger, tears, vigils, lowering of flags, moments of silence and then, nothing changes. The outpouring of love and support is wonderful and incredibly important, but if we continue to simply go back to our lives and wait for the next horrific act of gun violence, then we are to blame."

Imam Muhammad Musri, president of the Islamic Society of Central Florida, and co-host of a weekly interfaith show on public radio, seemed to be everywhere, dashing to the street outside Pulse in the early hours of June 12. With an associate, Imam Tariq Rashid, the two clerics appeared at vigils and interfaith services through the week, including the massive rally at Lake Eola, offering sympathy and denouncing terrorism.

Rashid joined Episcopal, Methodist and Baptist clergy at the altar at St. James Catholic Cathedral downtown the day after the shootings for a bilingual "Vigil to Dry Tears." Noonan told the 700 people in the pews that it was critical that the community, especially the religious community, hold together in the face of such a crisis.

At the same time as the St. James vigil, tens of thousands of others were gathering for an outdoor vigil six blocks away, in front of the city's new performing arts center, where Musri and other Christian clergy spoke to the crowd.

But beneath the interfaith comity, and even in a community ostensibly united in grief, some long-standing tensions remained.

While the interfaith service was going on at First Methodist, more than 2,500 Protestant evangelicals and Pentecostals gathered at First Baptist of Orlando, outside of town. After some discussions, pastors from the area's mega-churches decided that they could be more effective meeting just among their own congregations. There was no mention of the Muslim community.

The tone of the evangelical ministers' messages bordered on the confessional, acknowledging that they had not in the past reached out to the LGBTQ community, and that their tone had often been perceived as hostile.

The Rev. Joel Hunter, of Northland, a Church Distributed, one of the state's largest congregations, was scheduled to deliver "A Prayer for the LGBTQ Community." However, he said that since he had always been part of a powerful, majority community -- straight, white, Christian males -- and had never been "part of a vulnerable or a persecuted community," he was ill-equipped to speak on the subject. He stepped aside and relinquished the microphone to Victoria Kirby York, national campaigns director with the National LGBTQ Task Force.

"We still have far too many people who don't believe that God's love extends to them," said York, making no direct reference evangelicals' previous opposition on issues like gay marriage, and their belief that homosexuality is a sin.

However, one of the speakers at First Baptist, the Rev. Gabriel Salguero, president and founder of the National Latino Evangelical Coalition, and pastor of Iglesia El Calvario in Orlando, did feel the need to address the issue the night before at the outdoor vigil downtown.

"It is not true that evangelicals have a war with the LGBT community," Salguero declared to the crowd.

This belated support of the evangelical community was welcomed. But some members of the gay community and their allies found unseemly the parade of local, state and federal officials who have built political campaigns on opposition to gay marriage and gay adoption, as well as gun control, who have raced to the crime scene to denounce the shootings.

"They have not apologized, and they have not committed to do better," said Central Florida Rep. Alan Grayson, a longtime supporter of gay rights, who helped several victim families from outside the U.S. obtain emergency visas. "They have cried crocodile tears for the cameras. That's all."

"It's hard to find even a hint of a silver lining in an act so evil," said James Coffin, executive director of the Interfaith Council of Central Florida. "But if this senseless act of hatred causes us as a community and as a nation to more consistently look beyond our differences and respond unreservedly with compassion and love to everyone because our common humanity demands it, something positive will have emerged from this horrible event."

[Longtime Orlando religion writer Mark I. Pinsky is author of A Jew Among the Evangelicals.]

Parish | Orlando shootings: faith in the face of civic trauma

A humble church of acolytes