Pastors advise common sense in getting to Mass in bad weather 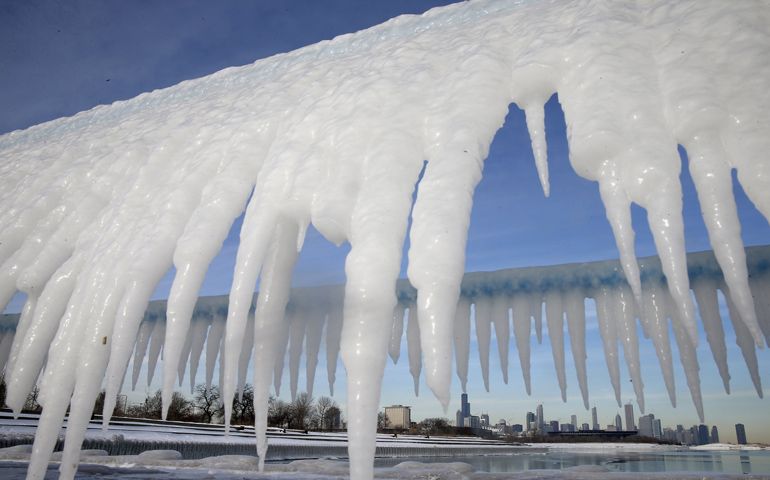 The Chicago skyline is framed by icicles Jan. 8. (CNS/Reuters/Jim Young)

Little Rock, Ark. — Amid the closing and cancellations brought on by winter storms, pastors -- even in the southern U.S. -- have to consider when severe weather conditions dictate canceling Mass.

In late January, an arctic blast that hit the Deep South caused at least 13 deaths and prompted six states to declare emergencies. Drivers in Atlanta spent six to 14 hours in traffic gridlock on icy roads Tuesday.

As the relatively new pastor of St. Peter the Fisherman Church in Mountain Home, Fr. Norbert Rappold has spent the past several months learning the ins and outs of the parish and his first winter in north Arkansas has him considering when he might need to call off Mass because of bad weather.

His take: In 99 percent of the cases, don't bother.

"We have a good number of people here who grew up in Chicago and other northern places, so snow isn't really a big deal to them," he said. "Most parishioners know that if it is snowy or icy that they don't have to come, but I still wind up celebrating Mass for 30 to 40 people. There's just no point in canceling it," he told the Arkansas Catholic, Little Rock's diocesan newspaper.

The Catholic church does not have a specific inclement weather policy. The Catechism of the Catholic Church states: "On Sundays and other holy days of obligation, the faithful are bound to participate in the Mass."

The acceptable circumstances for missing Mass are succinct and relatively vague in the catechism: "The faithful are obliged to participate in the Eucharist on days of obligation, unless excused for a serious reason (for example, illness, the care of infants) or dispensed by their own pastor. Those who deliberately fail in this obligation commit a grave sin."

Weather emergencies fall to the judgment of pastors who often urge parishioners to use common sense instead of being ruled by fear of mortal sin.

When weather forced Fr. Matt Garrison, rector of Cathedral of St. Andrew in Little Rock, to cancel selected weekend Masses last December, he received varied responses. Those who braved the conditions felt the church should open regardless. Others took a more sacramental approach.

Garrison said while a percentage of Catholics operate out of a sense of duty that borders on recklessness, as rector he has to think of the greater good especially when it comes to safety.

"We had chunks of ice falling off the roof and even though the streets were clear, the parking lot was a sheet of ice," he said. "Whether or not someone could physically get here wasn't the point, it was not safe for people to be out just to get here and maybe fall or get hit by something falling off the roof."

Fr. Bill Elser, pastor of Sacred Heart of Jesus Church in Hot Springs Village, said he tries to remind his parishioners that "yes, it's very important to go to church, but your safety is also very important. God wouldn't want you to put yourself in peril unnecessarily."

Fr. Silvio D'Ostilio, pastor of St. Joseph Church in Center Ridge, thought he had to cancel Mass for the first time in his priesthood with some recent icy weather and he communicated the cancelation with parishioners through an email list.

"There were only four or five there for Mass, but they were there. I thought that if they could show that kind of commitment, then I could too, but I couldn't get up my driveway," said D'Ostilio, a Holy Spirit priest. "I had two umbrellas stuck into the ground to try and walk, and I kept sliding back. One guy stopped and helped me up and got me to church. That was a good experience."

But even as they preach common sense, many priests share D'Ostilio's point of view and are not about to deny the miracle of the Eucharist and community of the Mass to those who seek it. In a society increasingly fickle in its loyalties, they cannot help but be gratified by the devotion shown by parishioners willing to brave the elements.

"It's not just here, my previous parishes in Mena and Glenwood were the same way, you can't cancel," Rappold said. "Sometimes you shake your head and wonder where's the common sense, but mostly you feel humbled when you see such a faith that basically says, 'Lord I trust in you, and I know you're not going to let anything happen to me.'"

[Dwain Hebda is associate editor of the Arkansas Catholic, newspaper of the diocese of Little Rock.]