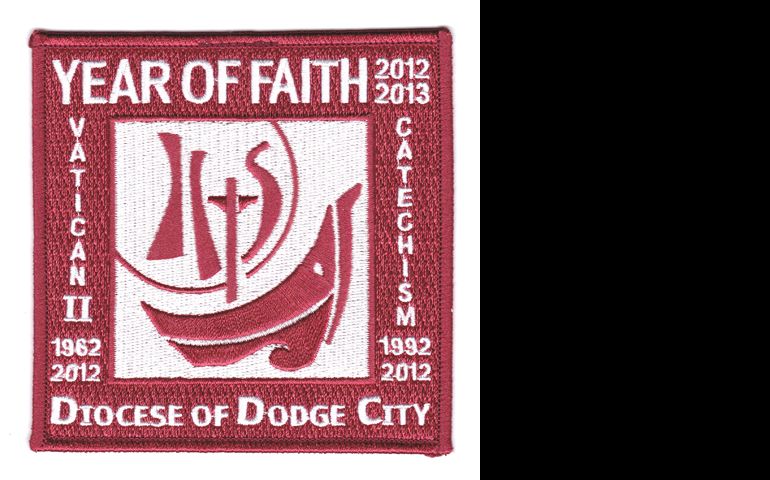 A scoutmaster in the Diocese of Dodge City, Kan., has developed this Scout patch to help all those involved in scouting, including adult leaders, "delve more deeply" into their Catholic faith during the Year of Faith called for by Pope Benedict XVI. (CNS/Diocese of Dodge City)

Kansas City, Kan. — A scoutmaster in Dodge City has developed what may be the only Scout patch program in the nation for the Year of Faith.

Bishop John Brungardt of Dodge City was the catalyst for the patch, said Scoutmaster Tim Wenzl of Troop 162 in Dodge City, spokesman for the diocesan Committee on Scouting.

"When Pope Benedict announced the Year of Faith, Bishop Brungardt held a (diocesan) directors' meeting and asked us to think of ways we could tie our departments and organizations into the Year of Faith," said Wenzl, who also is diocesan archivist and media liaison.

He knew just the thing that would motivate his Scouts: a colorful patch.

"Scouts like to earn patches," Wenzl said, "whether it's for rank advancement or merit badges."

Wenzl learned how popular a Catholic patch program could be when he initiated a Year of the Eucharist patch in 2004 and got inquiries from Scout units in 39 states and one foreign country.

The square red-and-white patch features the official Year of Faith logo, flanked by the anniversary dates of the Second Vatican Council and the Catechism of the Catholic Church, with "Diocese of Dodge City" at the bottom.

The patch may be earned by Cub Scouts, Boy Scouts, Girl Scouts, Venturers and their adult leaders. Members of parish youth groups may also earn the patch.

It is a self-administered program monitored by adult leaders. The patch is earned by completing a series of requirements. Separate requirements have been developed for three age groups: first through fifth grades, sixth through 12th, and adults. The patch can only be earned during the Year of Faith.

The requirements can be obtained by going to the diocese's website. Scroll down to last half of homepage and click on the red-and-white Year of Faith patch.

Different age levels have several different requirements. For example, one requirement for first- through fifth-graders is to ask a parent or grandparent several questions, including, "What does your Faith mean to you? What was the Second Vatican Council?" They also are asked to choose three out of five actions, such as receiving Communion during a Scout Mass either at their parish church or at Scout camp.

For sixth- through 12th-graders, requirements include reading one church document, such as Pope Benedict's homily for the Mass for the new evangelization, and do three of five activities. One suggestion is to invite a friend to Mass, a religious education/youth group activity or a CYO social.

Adult leaders have their own list of activities to complete to earn the patch.

"This (religious activity) will allow Catholic scouts to delve into the Year of Faith more deeply," Brungardt said in a statement posted on the website.

Patches can be ordered by contacting Wenzl at twenzl@dcdiocese.org or by writing: Year of Faith Scout Patch, Diocese of Dodge City, P.O. Box 137, Dodge City, KS 67801.

Patches are $5 each. Checks should be made payable to the Catholic Committee on Scouting. Please list the number of patches needed and the date of the awards presentation. For information, call Wenzl at (620) 227-1556.

[Joe Bollig is a staff writer at The Leaven, newspaper of the Archdiocese of Kansas City, Kan.]

Bringing resources to US dioceses in need

Finding community in the Castro

Austrian priest to speak at Philly college despite archdiocesan ban