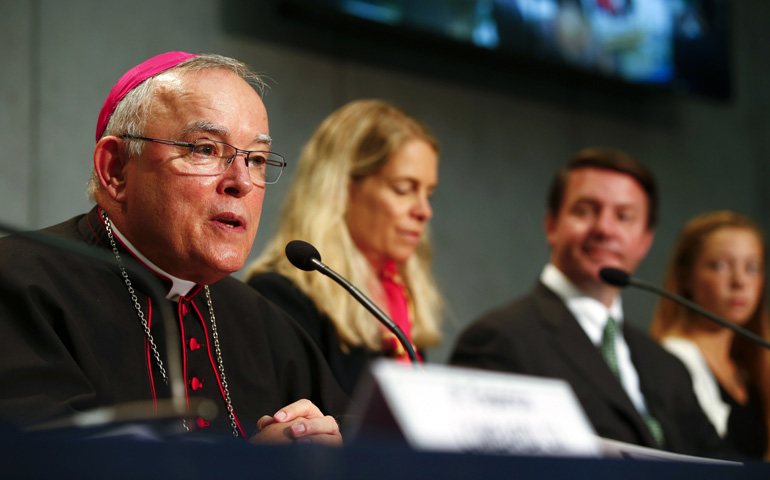 Archbishop Charles Chaput of Philadelphia speaks during a press conference Tuesday at the Vatican. (CNS/Reuters/Tony Gentile)

The World Meeting of Families in Philadelphia in September 2015 will serve as a forum for debating issues on the agenda for the world Synod of Bishops at the Vatican the following month, said the two archbishops responsible for planning the Philadelphia event.

At a briefing Tuesday, Archbishop Vincenzo Paglia, president of the Pontifical Council for the Family, described the world meeting as one of several related events to follow the October 2014 extraordinary Synod of Bishops on the family, which will prepare an agenda for the worldwide synod one year later.

Such events, including a January 2015 meeting in Rome with family and pro-life groups, will enable a debate on the synod's agenda "at the international, global level," Paglia said. "It is important that this text not remain an abstract text reserved to some specialists."

"In this way, the debate at the ordinary synod will be enriched," the archbishop said.

Pope Francis has said both synods will consider, among other topics, the eligibility of divorced and civilly remarried Catholics to receive Communion, whose predicament he has said exemplifies a general need for mercy in the church today.

"We're bringing up all the issues that would have appeared in the preparation documents for the synod as part of our reflection," said Archbishop Charles Chaput of Philadelphia, regarding plans for the world meeting. "I can't imagine that any of the presenters won't pay close attention to what's happening" in Rome.

Chaput said as many as 15,000 people are expected to take part in the meeting, whose program will be kept flexible to allow for topics that emerge from the bishops' discussions at the Vatican this October.

"But we haven't approached this as a part of the synod," Chaput said. "It's a celebration of family life, the Catholic church's commitment to support families."

Pope Francis is widely expected to attend the Philadelphia event, although Chaput noted that an official announcement in that regard might not come until well into 2015. If the pope does attend, he said, a "papal Mass could easily draw more than a million people."

Among the other family-related events planned for the coming year, Pope Francis will meet Sept. 28 will thousands of grandparents and other elderly people, including a married couple who have fled Islamic State terrorism in northern Iraq.

The pope will give the elderly a large-print edition of the Gospel of Matthew and bless the group, which will also include about 100 priests.

Chaput announced the publication of the preparatory teaching document, "Love is Our Mission," for the world meeting and unveiled a portrait of the Holy Family by a Philadelphia artist. The portrait will hang in the city's cathedral during the 2015 event.

The extraordinary synod will meet Oct. 5-19 at the Vatican, bringing together the presidents of national bishops' conferences, the heads of Eastern Catholic churches, Vatican officials and papally appointed delegates, including laypeople. The world Synod of Bishops, which will include more bishops -- many elected by their peers -- will meet at the Vatican Oct. 4-25, 2015, to continue the discussion on pastoral approaches to the challenges facing families.