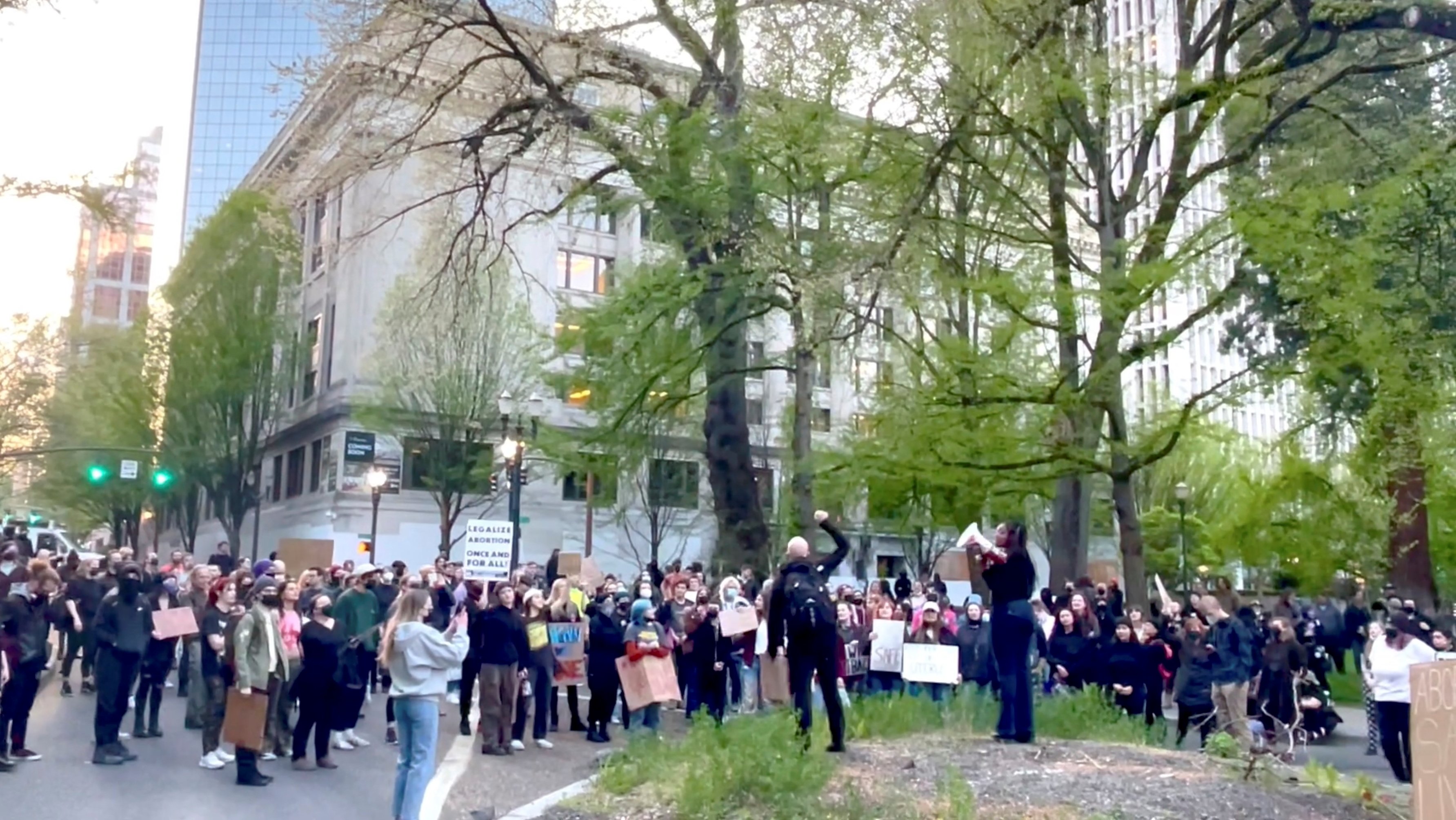 Demonstrators in Portland, Ore., gather during a protest May 3, 2022, after the leak of a draft majority opinion written by Justice Samuel Alito that indicated a majority of the court would vote to overturn Roe v. Wade in its opinion in the Dobbs case, which was a challenge to a Mississippi law banning abortions after 15 weeks. (CNS photo/Grace Morgan, Twitter @gravemorgan via Reuters)

The Portland Activists online calendar had announced night rally at nearby Peninsula Park with the intent to "Abolish SCOTUS."

Since the U.S. Supreme Court's June 24 decision overturning Roe v. Wade and letting the states decide abortion laws, Catholic buildings across the nation have been a target of vandals who have cited the church's support for the unborn.

Holy Redeemer had been vandalized with graffiti in the spring and was being mentioned by name in anarchist chatter in late June. After the Peninsula Park rally, more than one fringe group bent on vandalism marched toward Holy Redeemer.

But police were ready, along with the media who had alerted the public earlier that day.

"When the anarchists approached our block, the police announced it was an illegal gathering and blocked them as they rushed the church building," said Holy Redeemer parish council member Tom Markgraf, whose family has been members of Holy Redeemer for more than a century.

"The police were superb. They blocked the anarchists. The lights shining on them and exposing them caused many to pull back. The church building was spared," he said.

After police determined the threat had diminished shortly after midnight and returned to patrol duty, private security guards hired by the parochial vicar averted three attempts in the early morning by small groups seemingly intent on doing mayhem at the church.

In the days leading up to July 1 and the planned protest, Holy Cross Fr. Michael Belinsky, parochial vicar of Holy Redeemer, worked with the Portland police, private security and the Archdiocese of Portland to manage the potential violence and threat to property and persons.

Parish staff and volunteers barricaded the church's front glass doors and removed everything from the church that could be used as a weapon or was flammable. Even the tabernacle and the Blessed Sacrament were removed for safety.

Two retired police officers stayed with Father Belinsky, Holy Cross Fr. Cameron Cortens and two seminarians in the rectory the night of July 1 for protection, even devising an evacuation plan in case the building were breached.

"He was steadfast in a peaceful response, securing the building and his attitude with the press was amazing," Markgraf told the Catholic Sentinel, Portland’s archdiocesan newspaper.

Belinsky stayed in touch with Holy Cross Fr. Pat Neary, the pastor, who was in Rome for a General Chapter meeting of the Congregation of Holy Cross, Portland Archbishop Alexander Sample, who was out of town, and officials at the pastoral center as well as local police.

At Mass July 3, Belinsky thanked police and the many volunteers who worked to keep the church safe, including those who prayed. The priest also made a public appeal to common sense.

"We as a church are here to serve all people, the poor, the marginalized, the unborn and those who are discriminated against because of their race or if they are gay or transgender," Belinsky said, seeking to point out the senselessness of attacking a Catholic parish church. "We are here for everyone."

"We simply must work together within the reasonable boundaries of government to make this a more cooperative, compassionate society," Belinsky said.

In the Peninsula Park the night of July 1, where about 60 anarchists had gathered, one friend of Holy Redeemer was present and heard talk of attacking Holy Redeemer.

"I felt like I was in the movie 'High Noon' with Gary Cooper," said Markgraf, who stayed in the church during the night. "Would anyone come in to help us?"

On their way out of the park, anarchists smashed the windows of a closed coffee shop and headed toward the church. Then the police responded with what Belinsky called "appropriate presence and force."

Markgraf thinks the riots have less to do with Roe v. Wade than with young men seizing a chance to wreak havoc and get away with it. "It's time to stop letting them get away," he said.

The ending was good this time, Markgraf said, but he fears more attacks citywide in the future and urged city officials to get tougher.

"The city has to stop its yearlong passive tolerance of this terrorism," Markgraf said. "Our community is suffering, maybe dying. If Portland is to stem the bleeding, and regain its vitality, it needs to be fought for. And it is worth fighting for.

"I do not condone vigilantism. We don't want to go there. We need a strong, responsive police force."

[Langlois is managing editor of the Catholic Sentinel, newspaper of the Archdiocese of Portland.]