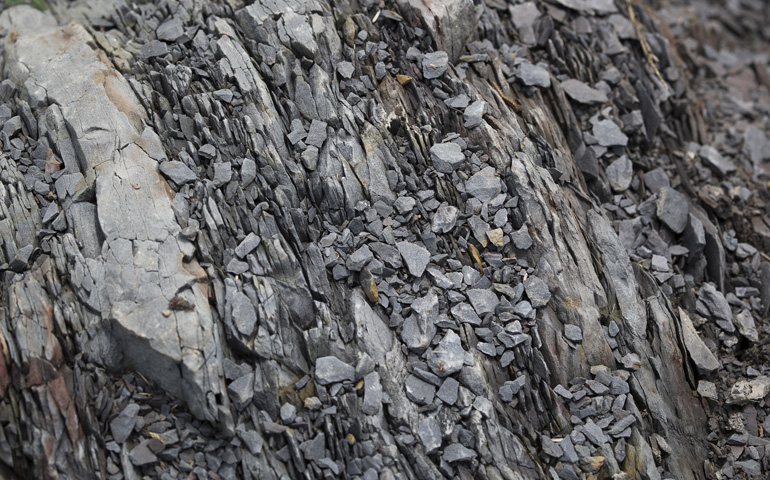 Pope Francis' encyclical, "Laudato Si', on Care of our Common Home," comes just as the Appalachian Catholic community celebrates the 40th anniversary of the groundbreaking 1975 pastoral letter, "This Land is Home to Me."

The development of "This Land" is instructive as Catholics and business interests sort through Francis' encyclical today. Forty years ago, drafts of "This Land" were circulated to interested parties -- community members, activists, sisters, priests and laity -- who gave feedback in a remarkably collegial process in forming local magisterial teaching on issues facing the Appalachian region.

One of the interested parties that read the drafts was the coal industry, which was unhappy with the contents. And rightly so. The letter's message was harsh, telling the truth about an economic system that values profit over people and an industry whose stranglehold on the region devastates the land and impoverishes the people.

The industry was so upset that the bishops met with a group of coal executives at the Pittsburgh airport in December 1974, only a few months before the final version of the letter would be promulgated. Catholic activists feared that the prophetic message would be derailed, but this was not the case. The bishops heard the industry out, and a few revisions were made giving more nuance to letter's section on the role of unions in Appalachia. But the letter retained its devastating critique of the extractive industry and the ideology of the "maximization of profit," which the bishops condemned as idolatry.

Laudato Si' echoes many of the same themes found in that letter and its 1995 sequel, "At Home in the Web of Life."

Responding to media inquiries, Bransfield focused primarily on Francis' thoughts on the urgency of ending our reliance on fossil fuels, of obvious import to his coal-producing state.

In Paragraph 165, Francis writes, "We know that technology based on the use of highly polluting fossil fuels -- especially coal, but also oil and, to a lesser degree, gas -- needs to be progressively replaced without delay. Until greater progress is made in developing widely accessible sources of renewable energy, it is legitimate to choose the less harmful alternative or to find short-term solutions."

In his comments in various interviews, Bransfield seems engaged in a kind of damage control, reassuring West Virginians that there is no way the pope could actually be calling for a swift end to coal mining. His official statement reads, "Specifically regarding coal, the Holy Father does suggest we reduce our reliance on fossil fuels, but in the next sentence of his encyclical, he says we should do so 'only after greater progress is made in developing widely accessible sources of renewable energy.' "

"Only after" are not the words used in the encyclical, and Bransfield's deliberate rewording of this phrase suggests a subtle but important change in meaning. He is essentially insisting that Francis simply can't mean what he seems to mean.

This is simply not what Pope Francis says. Bransfield made this up.

But more than simply an error in quotation, Bransfield here seems to be deliberately translating Francis using the language, talking points and falsehoods of the coal industry. Bransfield is falling for the simplistic "jobs vs. the environment" binary, an inadequate way of framing the issues that is continually parroted by Appalachian politicians.

Behind his words lies the assumption that coal mining jobs are of utmost importance in West Virginia. They are not. Wal-Mart is West Virginia's largest employer and has been since 1998. Coal employs fewer West Virginians as the industry itself has been slashing jobs in favor of increased mechanization and in response to the rise of oil and gas. Solar energy jobs are in fact skyrocketing across the country, though not necessarily in coal country.

Against these facts, in a local news interview, Bransfield even goes so far as to offer a message directly opposite of Pope Francis' plea for an end to fossil fuels by brazenly promoting the myth of "clean coal": "Coal is a big industry and very important to the employment of our people. I think a technological improvements of cleaning of coal and other things can bring us to a point where we can use coal. I don't want my coal miners here in West Virginia unemployed and that's been a big problem lately."

Francis in Paragraph 36 says, "Caring for ecosystems demands far-sightedness, since no one looking for quick and easy profit is truly interested in their preservation." But there is no such far-sightedness, insight or imagination to be found in Bransfield's encyclical response.

More than shortsighted, Bransfield's comments are nothing short of propagandistic. His message to the industry and West Virginia Coal Association, which is understandably upset with the pope's message, seems to be, "Rest easy. The coal industry in West Virginia will not receive any criticism from the church."

Of course, we mustn't romanticize the Appalachian bishops of the mid-1970s as bold, liberationist clergy. But they were at least willing to speak prophetically in the face of injustices in the mountains, issuing bold statements in cooperation with groups like the Catholic Committee of Appalachia, who were engaging injustices at the grass-roots level.

Today's Appalachian bishops, like most U.S. bishops, are affected by what theologian Joe Holland calls a "bourgeois captivity," with allegiances to industry and the powerful. Bransfield shows which side he is on when he says, "I used to like the slogan 'West Virginia is Open for Business.' I mean, it's wild and wonderful, but it's open for business."

Given this response, it is important to ask how money might influence attitudes. The investment portfolio for the diocese of Wheeling-Charleston does contain "energy related investments," according to diocesan spokesman Bryan Minor. When asked whether divestment from fossil fuels is something the diocese has considered or will consider as a concrete response to Francis' encyclical, Minor said because the finance council and financial advisers have not met since the release of the encyclical, "we do not have an answer."

Catholics in Appalachia should be asking serious questions about their dioceses' financial ties to these industries, following the lead of numerous Catholic institutions of higher learning and non-Catholic church communities who have divested from coal and other extractive industries.

West Virginia's current shepherd seems to have accepted the coal industry's public relations campaign totally and uncritically. The prophetic potential of the current crop of Appalachian bishops seems to have been strip-mined. But not all hope is lost.

The dangerous memory of the original Appalachian pastorals lives on in the work of groups like the Catholic Committee of Appalachia (CCA) and Christians for the Mountains that remain active among vulnerable communities no matter how aligned the current bishops are with the forces threaten to crush the people, their communities and their land.

In the absence of engagement and truth-telling on the part of our local Catholic leaders, groups like CCA fill the void by amplifying the voices of those who suffer as a result of coal industry practices. When Appalachian Catholic bishops project nothing but a deadly silence in the face of mountaintop removal, for example, the cries of the poor and of the Earth themselves become the "magisterium of the poor" to which all of us, bishops included, must bend our knees. To address such silences, CCA, along with ecumenical partners, will issue our first "People's Pastoral" in late 2015, raising up diverse and unheard voices longing for justice.

Bransfield is missing an opportunity to make deep and fruitful connections between Pope Francis' new encyclical and the earlier tradition of the Appalachian pastoral letters, which were so clearly ahead of their time not only for what they taught us about reality in Appalachia, but the way an idolatrous economic system is revealed through the lens of Appalachia's suffering.

In his deliberate distortion of the Francis' message, Bransfield makes clear that he considers as his role chaplain to the coal industry rather than pastor of his people, a people that includes residents of suffering coalfield communities.

But conversion from chaplain to pastor is possible. We have the example of Archbishop Oscar Romero, after all, who is finally on his way to sainthood. The elites of El Salvador believed they had a strong chaplain behind them, too, but Romero was converted by the suffering of his people once he stepped outside of the circles of the powerful.

There is always hope that bishops like Michael Bransfield might step out of the circles of the powerful, as well. I am certain Bransfield never met the faith-filled coalfield activists Judy Bonds or Larry Gibson before their recent deaths and probably made no effort to do so. He should have. Meeting Larry Gibson and hearing words like his could have brought about the "ecological conversion" in Bransfield that Pope Francis speaks about:

But there are many more people struggling against this deadly extraction economy to whom Bransfield can listen and from whom he can learn. Francis calls each of us, bishops included, "to become painfully aware, to dare to turn what is happening to the world" -- and to our corner of it here in West Virginia -- "into our own personal suffering and thus to discover what each of us can do about it" (Paragraph 19). The invitation for Bransfield to leave the circle of the powerful is an open one.

Because this land, and these people, are home to us. Catholics in Appalachia continue to ask when this land will be home to our bishops again, too.

[Michael Iafrate is a theologian and songwriter from West Virginia. He is a doctoral candidate at the University of St. Michael's College, University of Toronto, and a board member of the Catholic Committee of Appalachia.]