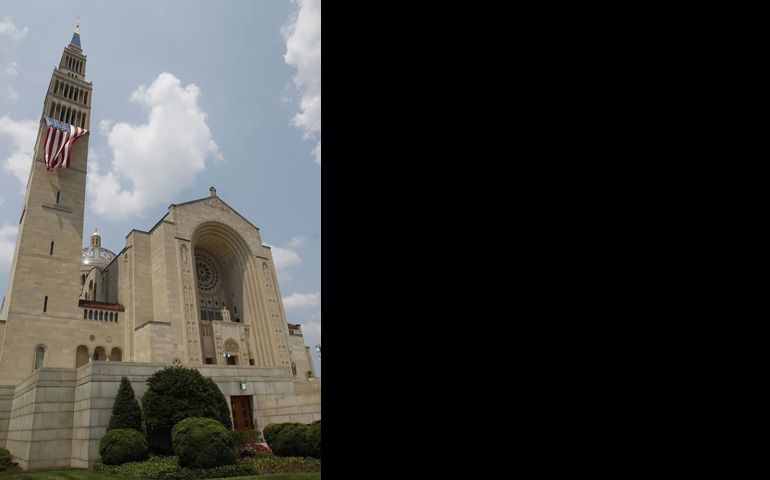 The Basilica of the National Shrine of the Immaculate Conception in Washington (CNS/Bob Roller)
This article appears in the Francis in the United States feature series. View the full series.

Washington — Pope Francis will make history during his visit to Washington in September, when he becomes the first pope to address a joint meeting of Congress and he says the first canonization Mass to be celebrated in the United States.

Washington Cardinal Donald Wuerl outlined details of the pope's Sept. 22-24 visit to the nation's capital at a news conference Tuesday at the Cathedral of St. Matthew the Apostle in Washington after the Vatican published the detailed schedule of Pope Francis' Sept. 19-22 visit to Cuba and his Sept. 22-27 visit to the United States.

St. Matthew Cathedral also is on the pope's U.S. itinerary, as is a visit to an outreach program operated by Catholic Charities, where he will meet clients served by the agency.

"The Holy Father is visiting our home, he is coming to visit us," Wuerl said, adding that the pope will be visiting "not as a politician, but as a pastor."

The theme of the papal visit to the Washington archdiocese is "Share the Joy, Walk With Francis." It is the first leg on his first U.S. trip, which also includes stops in New York City and Philadelphia.

Noting the pope's "immense popularity," Wuerl called the Washington visit "an exciting time for this archdiocese, the church in the United States and this city."

He said the "excitement and desire to see the Holy Father" from even among non-Catholics, is because Francis "speaks in an inviting way to us to add a spiritual dimension to our lives, and to have a relationship with God."

Pope Francis will arrive Sept. 22 on a flight from Cuba to Andrews Field at Joint Base Andrews just outside of Washington. There will be no public events that day.

On Sept. 23, Pope Francis will begin his day with a welcoming ceremony at the White House followed by a private meeting with President Barack Obama. He also will have midday prayer with the U.S. bishops at St. Matthew Cathedral.

"We are so blessed to have the Holy Father visit St. Matthew's during his time in Washington. There is so much excitement about this visit because the Holy Father shows us how to live our relationship with Jesus Christ," Msgr. W. Ronald Jameson, rector of the cathedral, said in an interview with the Catholic Standard, the archdiocesan newspaper.

After departing the cathedral, Pope Francis will offer Mass that afternoon on the east portico of the Basilica of the National Shrine of the Immaculate Conception and the university mall at The Catholic University of America. During the Mass, the pope will canonize Blessed Junipero Serra, the 18th-century Spanish Franciscan missionary who established mission churches along the coast of California.

Noting that the "huge, vibrant and significant population" of Hispanic Catholics is "a big and welcome part of this archdiocese," Wuerl said the historic canonization Mass will be offered in Spanish.

Representatives of the Catholic church in California, the leadership of religious communities and representatives of Hispanic Catholics across the country will be invited to the Mass, Wuerl said. The congregation also will include many students from Catholic University. The cardinal noted that the majority of the tickets for the liturgy will then be made available to local Catholics through their parishes, however no system of distributing tickets to the Mass has been determined yet.

Large Jumbotron screens will be set up around the campus for those who cannot get into the Mass area.

Frank Persico, vice president for university relations and chief of staff at The Catholic University of America, said "students are elated" about Pope Francis' upcoming visit.

The university hopes to be able to accommodate 30,000 people to be seated or standing at the Mass, he said, and university president John Garvey hopes that most of the school's 6,500 students will be able to attend.

Asked about the honor of Catholic University hosting a pope for the third time, after St. John Paul II visited in 1979 and Pope Benedict XVI visited in 2008, Persico said, "To me, it's a testament to the fact that Rome, the Holy Father and the bishops all see the value of our national Catholic university."

While Catholics will be outside for the Mass, inside the national shrine will be seminarians and novices from across the country whom the pope will greet prior to the Mass. Wuerl said this will show the pope "the vitality and youth of the church in this country."

"This is very historic for us because he will be the first pope to celebrate Mass -- and this will be first-ever canonization to take place the United States -- at America's patronal church, the nation's shrine to Mary," said Msgr. Walter Rossi, rector of the national shrine.

Pope Francis will address a joint meeting of the U.S. Congress the morning of Sept. 24, becoming the first pope in history to do so.

"He will speak to Congress as a shepherd, a pastor of souls who has no political agenda," Wuerl said. "I do not know what he will say, but I am sure he will speak about our relationship to God and how that can be manifested by our service to others."

Afterward, he will visit St. Patrick Church in Washington and will meet with clients of Catholic Charities, Then he will offer a blessing and remarks to those gathered for lunch at the St. Maria Meals Program outside the agency's headquarters.

"This visit [to Catholic Charities] says that whatever else is going on, the Holy Father asks us, don't lose sight of our brothers, the poor," Wuerl said. "We want to highlight the work we do on behalf of and in response to the needs of the poor."

Msgr. John Enzler, president and CEO of Catholic Charities of the Washington archdiocese, said Pope Francis will "bless all those there that day [at Catholic Charities], those receiving and those serving food."

"He validates what we do every day," Enzler said. "The pope says, 'I want the church to be in the streets.' Catholic Charities is in the streets serving those in need."

Wuerl also said Catholics must "prepare our hearts because we're welcoming our shepherd." pray that "God enlivens in us our concern for those He is challenging us to care for."

"Pope Francis has captured the imagination of people around the world and touched the hearts of all of us," Wuerl said. "We look forward to our Holy Father's visit here, as it will be a time of God's grace at work among us in a unique way and an opportunity to be confirmed more fully as missionary disciples of our Lord."

[Richard Szczepanowski is a staff writer at the Catholic Standard, newspaper of the Washington archdiocese. Editor Mark Zimmermann contributed to this story.]

In family relations, good manners are no joke, pope says at audience