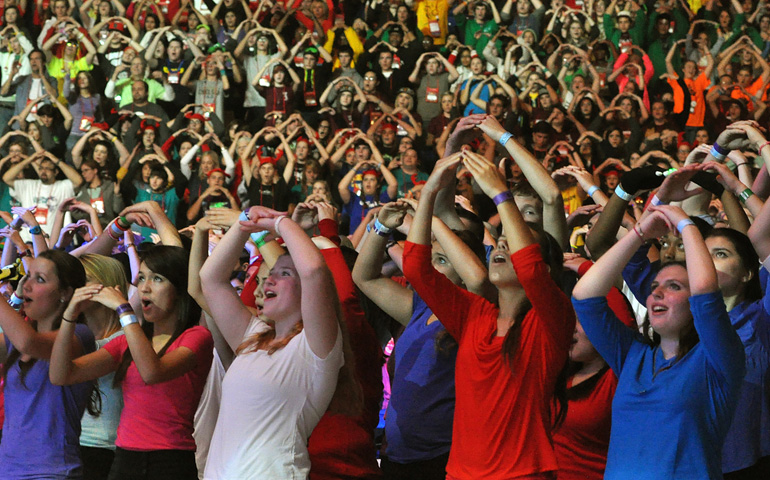 At the opening session of the National Catholic Youth Conference in Indianapolis Nov. 21, teens sing and move to a song in Lucas Oil Stadium. (CNS photo/Natalie Hoefer, The Criterion)

Besides tens of thousands of teenagers, 216 representatives of 62 religious communities in the United States also participated in the National Catholic Youth Conference Nov. 21-23 in the Indiana Convention Center and Lucas Oil Stadium.

They interacted with teens in a variety of settings in two large exhibit halls in the Indiana Convention Center that had been turned into a thematic park called "Inspiration Junction." It was a place where Catholic teens could create arts and crafts projects, put together meals for those in need, listen to Catholic musicians sing or pray in a variety of settings.

Representatives of different religious communities worked together in groups as they helped the teens in the thematic park.

Sacred Heart Brother Ronald Hingle of Baton Rouge, La., chairman of the board of the National Religious Vocations Council, stood in the midst of Inspiration Junction Nov. 21 and liked what he saw.

Two years earlier at the biennial youth conference, religious orders had booths in one part of the connected exhibit halls. Brother Ronald thinks the changed approach this year reflects the place of religious life among the faithful.

"Religious are, by our lifestyle, to be leaven in the church," he told The Criterion, newspaper of the Indianapolis Archdiocese. "We're to be part of the church and not separated from it. So we're trying to be all throughout the entire thematic park and the entire conference, as opposed to being separated and segregated."

Katie Allie, 16, of Cornelius, Ore., first attended the national conference in 2011. She saw the change in how religious were a part of the event this year.

"A lot of the kids get to interact with them rather than just hearing information from them (at booths)," she said. "They're also getting to do arts and crafts with them, and experience a little bit of what they have to offer. It gives them more of an impression."

That impression was able to be shaped in a special way in the thematic part at "Vocations Got Talent." Throughout the three-day conference, seminarians, deacons, priests and religious showed off their talents and shared their vocations stories in an area organized by the vocations office of the Archdiocese of Indianapolis and religious orders in central and southern Indiana.

Father Eric Augenstein, Indianapolis archdiocesan vocations director, said "Vocations Got Talent" showed the teens at the conference that people who discern a priestly or religious vocation have multifaceted lives beyond the ministries that they might see them involved in.

"They're able to continue to do the things that they love, like skiing, playing the violin, beekeeping or walking on stilts," Father Augenstein said. "We have a nun who walks on stilts. We have a brother who does juggling."

Frances Seaton was attending the conference from Owensboro, Ky. She said she has an aunt who is an Ursuline sister and a cousin who is a priest. She is considering religious life herself.

"I know that they're just regular people. They're awesome, too," Frances said. "It's great to see them not just at the altar because I think a lot of people think that priest and seminarians just do (ministry). But they're really awesome people, and have awesome talents to share with us."

Teens who wanted to have conversations with the religious at the conference could go from the often raucous thematic park to a quiet corner of the Vocations Nook, furnished with couches and easy chairs.

Alexandra Desrosiers, 16, of Belleville, Ill., chatted with Brother Ronald in the Vocations Nook. She appreciated how the religious at the conference were available to the teens and that a lot of them were talking with them about vocations to consecrated life.

"I think it's really cool because, personally, you think of church figures as people you really can't talk to," said Alexandra. "Seeing them here interacting with all of us and explaining to us about what they do is really nice.

"I think that it's nice that a lot of people are open to the fact that they might be called to something in the church. It's really cool."

Providence Sister Theresa Clare Carr stood in the middle of thematic park taking in the thousands of teens who made their way through the exhibit halls, often taking time to chat with her and other religious.

"It's been very heartwarming to see so many kids," Sister Theresa Clare said. "When we approach them, they're all smiles. They're happy to be here. We've met so many, from Connecticut and Baltimore to New Mexico and California.

"If we can plant a seed now, that's what counts."

[Sean Gallagher is a reporter at The Criterion, newspaper of the archdiocese of Indianapolis.]