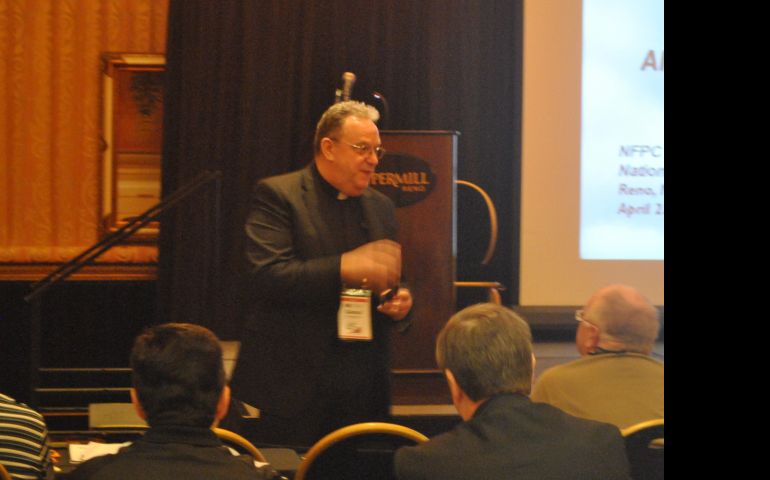 Reno, Nev. — Trust, brotherhood and finding self-value in yourself over your work. Those are among the keys for priests to achieve a greater state of wellness and mental health, according to Jesuit Fr. Gerard McGlone.

The executive director of the Saint John Vianney Center in Philadelphia, a behavioral health facility for religious and priests, McGlone outlined those three keys to happiness during a presentation Tuesday at the 45th annual conference of the National Federation of Priests’ Councils.

In speaking this past year with more than 9,000 priests across the country, he found happiness and morale are low, particularly in dioceses where major abuse crises have emerged, such as Philadelphia, Los Angeles and Kansas City, Mo.

A foundational element of the low morale is the broken trust among priests and their bishops, with roots in the adoption of the Dallas Charter, the 2002 procedures established for addressing priest sex-abuse allegations.

“I think priests are hungering to want to trust their bishops again and really repair the damage that was done by Dallas. They want to connect, they don’t know how, and there’s no one telling them how to do it,” he told NCR, adding that the priests have told him they want their bishops their advocate, not their adversary.

Part of that mistrust stems from the “dual process of justice and accountability” the charter prescribes, McGlone said. For the relationship to repair, “acknowledging the elephant in the room” – the trust has been lost – would be a first step; a second would entail implementing the same system of justice for all.

“The pendulum has to swing back to a normal sense of sanity that we can protect children and protect the rights of priests,” he said.

Bishops who have spoken with McGlone acknowledged the need to repair the relationship, but several identified that their time is often hijacked by the minority of problem cases.

“They’re not spending the time they would want or need to really repair the rupture and also be about nurturing those who are working very hard and really very well,” he told NCR. “And that’s the problem.”

Outside the scandal, McGlone talked in-depth of the shortcomings that have long existed in formation and still linger today. Among them, a lacking of training in cultivating happiness — something research has shown is not an inherent skill, but one that is a learned discipline.

Achieving a healthier sense of spirituality and healthy living can begin by priests thinking as they believe – practicing what they preach -- and returning to theological roots.

“Our Catholic anthropology is holistic, is holy, is about who God is, and creating the goodness of creation, and the goodness of who we are. And we often sabotage ourselves because we’re not examining what we really believe, and that affects our actions,” he said.

McGlone used the term “cultural Calvinists” to describe priests’ tendency to mimic some traits common to average American men – specifically, valuing self-worth by what they do, rather than who they are, a practice that often leads to overloaded schedules and poor health habits but rarely leading to increased happiness.

“I think, particularly, clergy and religious are prone to make this mistake because we’ve often been taught to do everything for Jesus, and to not feel certain things and to deny what we’re experiencing, as opposed to good psychology and good spirituality that is about entering what we’re experiencing more fully and seeing life in that,” he said.

A lack of training in emotional intelligence also has contributed to the wellness program. While the corporate world has adopted it as a critical component of strong leadership, the church has yet to follow.

“There’s no model there right now. I don’t see [those skills taught] in many religious orders, I don’t see that happening in many dioceses right now, and I think we do it at our own peril,” McGlone said.

As for the abuse crisis, formations for all religious have not addressed healthy sexuality, something the John Jay studies have revealed.

Careful not to excuse abuse under any circumstances, he said the studies showed 2.7 percent of known abusers were diagnostically pedophiles, with more than 60 percent abusing once and having no psychiatric diagnoses. The obstacles today involve preventing the opportunity for abuse from occurring and educating people on healthy sexuality, the latter still not happening.

“We’re not talking about healthy sexuality with our young men today and with priests today, as to how do you develop healthy and holy intimate relationships that are nurturing,” McGlone said.

Those can include relationships between priests, as well. Research has shown men connect with one another through shared activities, such as sharing meals and showing up to events rather than keeping to oneself.

The benefits of putting more resources toward priests’ wellness can benefit not just the men, but the larger church community.