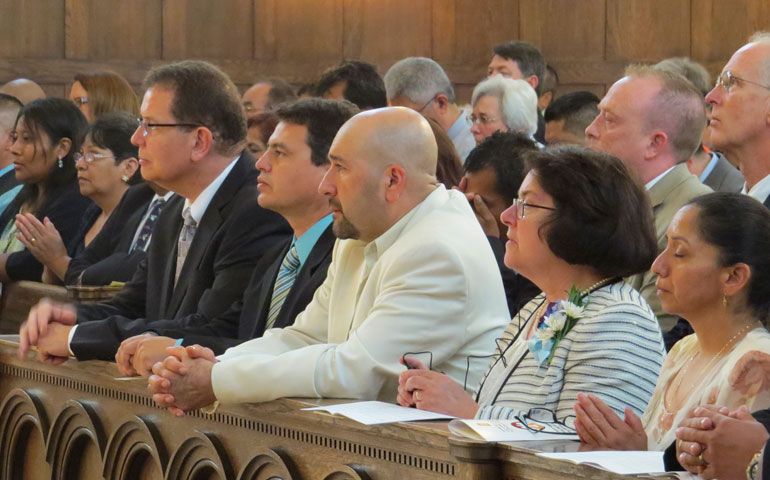 Lay ecclesial ministers kneel during the Mass to celebrate their certification at the Cathedral at the Madeleine in Salt Lake City Aug. 9. (Intermountain Catholic)

Spanning all of Utah, Salt Lake City is a missionary diocese in an area with a primarily Mormon population. According to Maria-Cruz Gray, director of Hispanic ministry for the diocese, taking classes to become a Spanish-speaking lay minister required sacrifice.

"Utah is 85,000 square miles," Gray told NCR. "Some of the Spanish participants have to drive up to four hours to be able to come to a hotel."

Participants for Emaus met five weekends a year for four years in Salt Lake City to train for their ministry.

Distance is challenging for more than just those in training. The job of a lay minister is to help close distance boundaries that make mission dioceses difficult to maintain, said Susan Northway, director of religious education for the diocese.

"Some of the priests in the rural areas will put a couple of hundred miles on their cars in a weekend to provide Mass at the different locations they serve," Northway said. "It's really important that we have people of residence in those communities that can help grow the church there. That's a lot of what these lay ecclesial ministers will do."

She described lay ecclesial ministers as "servant leaders, men and women who are called to catechize and evangelize people they serve directly under the bishop. They collaborate with missionary priests, deacons and other parish priests."

She also attributed much of the success of the program to Salt Lake City Bishop John Wester.

"We have an extremely active and involved bishop who encouraged us every step of the way. He has given retreats and talks, and he has been personally invested in this as an advocate," Northway said. "He has a vision of how lay ecclesial ministry will be developed in our diocese. This is a collaboration ministry."

Creating and funding Emaus was not a solo effort for the diocese. Helping was the Congar Institute, an initiative of the Southern Dominican Province based in San Antonio. The institute, which partners with dioceses for the formation of lay pastoral leaders, was responsible for finding Spanish-speaking instructors, and making sure that the certification process was up to the standards of the National Association for Lay Ministry. Catholic Extension, a fundraising organization that aims to strengthen poor mission dioceses in the United States, helped to fund the project.

Northway said 70-80 percent of Catholics in Utah are Spanish-speaking.

"A lot of our Spanish speakers came to Utah traditionally in times of construction boom preceding the Olympics held here in 2002," she said. "Many Hispanics come to Utah to work in turkey farms and mushroom farms, and other agricultural workers."

With so many Spanish-speaking Catholics in Utah, the popularity and interest in the Emaus program is growing, and another round of the program seems inevitable.

"It's not a matter of if, but when," Gray said. "I already have 37 new members in the list for the new program."

Gray said another program would start as soon as they could find the appropriate amount of funds through grants.

Salt Lake City is not the only diocese that is seeing a rapid growth in Spanish-speaking lay ministers. Nationally, Spanish speakers represent almost half of all lay ministers in the U.S., according to Alejandro Aguilera-Titus, assistant director of Hispanic Affairs for the U.S. Conference of Catholic Bishops.

Can laypeople lead a parish? Look to Louisville for a thriving example