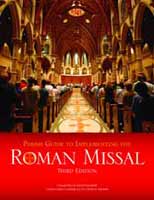 This is the cover to a parish guide on the English translation of the new edition of the Roman Missal. (CNS/USCCB)

NCR has obtained a copy of a scathingly critical report of what was to be the final Vatican-approved English translation of the Roman Missal. The report was sent to English-speaking bishops’ conferences around the world.

Read the full report: Areas of Difficulty in the Received Text of the Missal.

The professional expertise of the report suggests that it was probably written by a group of scholars who were involved in the 2008 translation of the Roman missal by the International Commission on English in the Liturgy, or ICEL.

NCR obtained a copy of the report from a member of the hierarchy of an English-speaking country who asked not to be identified as the source.

At issue is the quality of the new English translation of the missal — which critics say has declined measurably with the Vatican-introduced changes since 2008.

The critical report is clearly the product of a substantial group of highly professional scholars deeply familiar with the theological, biblical, liturgical and linguistic principles and issues surrounding the translation of liturgical texts from Latin into modern languages.

It focuses on differences between the English texts prepared by ICEL — a project finished in 2008 — and the changes introduced into those texts after they were approved by English-speaking bishops’ conferences around the world and submitted to the Vatican for final approval. Whatever changes were made in the texts after their submission to Rome, they were done under Vatican authority.

Anyone familiar with the liturgy wars of the past three decades can see, from the scholarly content of the report, that the team that developed it almost had to include a number of scholars from ICEL — scholars who, it should be noted, are all Vatican-approved.

An ICEL official declined to comment on what role, if any, ICEL or its scholars or consultants may have had in the report.

One internal piece of evidence at least intimating ICEL involvement in drawing up the report is the report’s own statement, in its introductory comments, “An exhaustive analysis of the entire received text can be completed should this be useful to ICEL’s member conferences.”

Whoever wrote the report, the bottom line is that it illustrates major areas in which the final Vatican version of the English translation of the Roman Missal made numerous departures from the Vatican’s own translation rules, changing almost countless texts that ICEL and English-speaking bishops’ conferences around the world had adopted — and so far there has been absolutely no explanation from the Vatican to justify those changes.

The U.S. bishops are to meet in Baltimore Nov. 15-18 for their annual fall meeting. Discussion of the missal translation is not part of the bishops' public agenda, but some observers believe it may be addressed in their two days of executive sessions, closed to the media. Only the Nov. 15 session and part of the Nov. 16 session will be public.

The report highlights, in accord with church law, that bishops’ conferences themselves retain a fundamental right to and responsibility for any liturgical translations adopted for use in their territory — in essence saying that if the bishops of a territory and the Vatican’s worship congregation clash on an issue, the Vatican may make a “final” editorial decision in its official recognition of a nation’s liturgy texts, but the bishops in turn may also oppose and seek to reverse that Vatican ruling.

Since at least mid-September rumors had been growing that the 2008 ICEL English translation of the Roman Missal — approved and submitted to Rome by English-speaking bishops’ conferences around the world by 2009 — had gone through extensive editorial revisions in Rome before the Vatican gave its final approval to the text in 2010.

A number of scholars with access to both the 2008 and 2010 texts have begun to complain that many of those revisions do not meet the Vatican’s own stringent guidelines for liturgical translations and in fact often reverse ICEL/bishops’ conference translations that are more accurate and in accord with those guidelines.

The criticisms have not just come from the United States. The Oct. 30 issue of The Tablet, England’s leading Catholic weekly, carried a letter from Fr. Alan Griffiths, a prominent scholar who was involved in the ICEL translation of the missal, decrying the revisions.

“Many of the changes are simply not correct English,” Griffiths wrote. “Whoever did this work seems to lack a sufficient understanding of our grammar.”

“This latest revision drives a coach and horses through the guidelines … of the Holy See on how to translate liturgical prayers into the vernacular,” he said.

At least a few of those editorial revisions may have come from requests for modifications that one bishops’ conference or another sent in, but it appears that many, if not most, originated with the Vatican Congregation for Divine Worship and the Sacraments itself or with its international English-language advisory committee that it established in 2001, Vox Clara.

Australian Cardinal George Pell of Sydney is chairman of Vox Clara. Its executive secretary is Msgr. James Moroney, a priest of Worcester, Mass., who is former director of the U.S. bishops’ liturgy secretariat (now called the Secretariat for Divine Worship).

The new missal in English, depending on the format in which it is published, is expected to run in the neighborhood of 1,500 to 1,700 pages.

It is currently slated to enter official U.S. use in Advent 2011.

If, as reported on some blogs, the Vatican-introduced revisions since 2008 number about 10,000, that would be an average of roughly six changes per page to the texts.

The sheer number of changes would raise questions about Vatican procedures for handling liturgical texts that have been developed and approved by bishops’ conferences, said one well-known U.S. liturgical consultant, Fr. Paul Turner.

It’s also rumored that some of the post -2008 revisions are now being revisited at the highest level.

This reported revisiting appears to be taking place because of the criticisms, even as the U.S. and other bishops’ conferences are working hard to prepare publishable versions of the missal to meet deadlines that will allow their parishes to have the new missal physically in hand by the time its use becomes official.

Pray Tell http://www.praytellblog.com — a liturgy blog run by Benedictine Fr. Anthony Ruff, a liturgy professor at St. John’s University in Collegeville, Minn. — reported in mid-October that the world’s English-speaking bishops’ conferences had received a highly critical scholarly report on the differences between the texts prepared by ICEL up to 2008 and the papally approved final version sent back by the Vatican in August 2010.

NCR followed up on that and subsequent Pray Tell and other blogs about the report to bishops with a story posted to its Web site Nov. 8: New beef about revisions in the revised Roman Missal.

It had also became clear by early November that the scholars’ report itself was an important element in the ongoing saga of how Catholics will celebrate the Mass in years or decades to come.

Read the full report: Areas of Difficulty in the Received Text of the Missal.

Parish roundup: Convocation of the Faithful; shelter from the cold