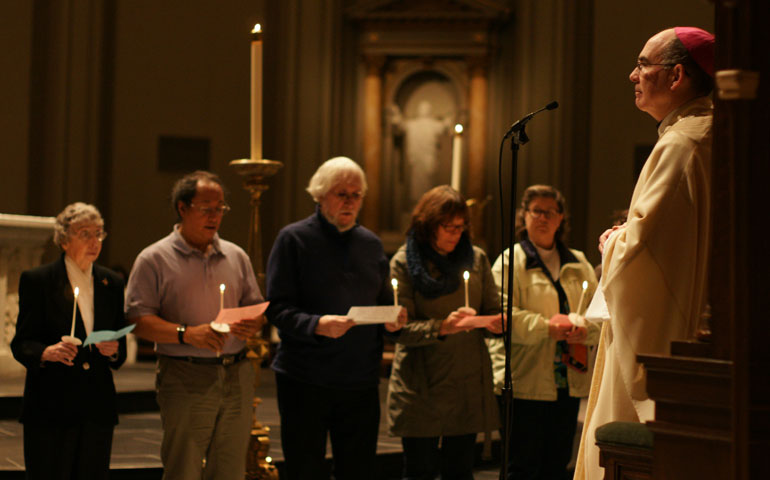 In the presence of parishioners, friends and visitors, members of three local chapters of Pax Christi, an international Catholic peace movement, gathered Jan. 17 at St. James Cathedral to take a Vow of Nonviolence at a Mass with Archbishop Peter Sartain presiding. Fr. Michael G. Ryan, pastor of St. James Cathedral, concelebrated the Mass.

Standing in a row holding white tapers, 12 men and women publicly committed to foster and promote peace in their lives and through their relationships with others. Sartain received the vows and concluded their words with a blessing. It was the first time that the Vow of Nonviolence had been made in the presence of the archbishop or professed at St. James Cathedral.

Published by Pax Christi in 1985, the vow is based on the belief that it is possible to be transformed through the love and example of Jesus. Beginning with these words -- "Recognizing the violence in my own heart, yet trusting in the goodness and mercy of God" -- the vow references teachings from the Sermon on the Mount and then lists the ways that participants seek to integrate Christ's teachings into their daily lives through a yearlong dedication to peacemaking, care of all creation, and nonviolence.

Recognizing the great challenges that the commitment entails, the vow ends with a direct appeal to God: "I trust your sustaining love and believe that just as you gave me the grace and desire to offer this, so you will also bestow abundant grace to fulfill it."

Their words hold special meaning for Sartain, who mentioned during his homily that Bishop Carroll Dozier -- who ordained Sartain to the priesthood in 1978 at the Cathedral of the Immaculate Conception in the city of his birth, Memphis, Tenn., and was a significant person in his life as a young priest -- served as a founding member of Pax Christi USA during its fledging years and remained active in the organization throughout his life.

Judy Bettice, who attends St. Patrick's in Memphis, remembers Dozier urging Catholics to be "Good Samaritans on the banks of the Mississippi" in his 1971 episcopal ordination speech and in the years after and recalled that "nonviolence was a thread that ran through all of his ministries" from ecumenical outreach to his pastoral letters on peace and economic justice.

Bettice also came to know Sartain when he was a deacon helping with liturgy preparation and other duties at her former parish, St. Michael Church, and described his prayers and reflections during one Advent retreat in particular as an incorporation of poetry and Scripture that gave a "real sense of beauty, quiet and solitude which set a tone for the season" and made her feel "that all knowledge and reality are interconnected and are part of God's creation."

Still mindful of the origin and application of words, Sartain pointed out during his homily in the cathedral that Pax Christi, a Latin phrase, is translated into English as "peace of Christ." Reflecting on the Gospel story of the paralytic lowered from the ceiling by his friends so that he could draw nearer to Jesus, he explained, "Whenever we make such a vow [as this one], it is an expression of our commitment and our trust, that he in whom we make the vow will be faithful in helping us fulfill the mission." In his blessing of the participants following the taking and receiving of their vows, he asked the God of peace to "make all of us who have been baptized in Christ instruments of your peace, and compelling advocates for justice in our community."

Mary Sontgerath, a parishioner at nearby Our Lady of the Lake Parish in Seattle, later said that taking the vow in this public way represented a natural progression in her own faith journey and provided an opportunity "to formalize what I had been praying for a couple of years." She explained that "this vow also impacts other facets of my life by continually reminding me to be peaceful myself and to treat all others in a peaceful manner."

Deacon Denny Duffel of St. Bridget Parish, a member of the Pax Christi Central group who has helped start a North Seattle chapter, echoed others' appreciation for the experience and expressed hope that more people would take the vow in coming years, adding, "It was an honor to have our archbishop receive our vows, and to profess the vow with the rest of our group, and with good friends witnessing with us."

According to the Pax Christi USA website, its U.S. membership includes more than 100 U.S. bishops, 700 parish sponsors, 600 religious communities, and more than 400 community-oriented groups. Priorities adopted by founders of the group remain central to members' efforts and include disarmament, alternatives to violence, peace education, primacy of conscience, and a just world order.

A version of this story appeared in the Feb 14-27, 2014 print issue under the headline: Archbishop blesses Pax Christi vows.