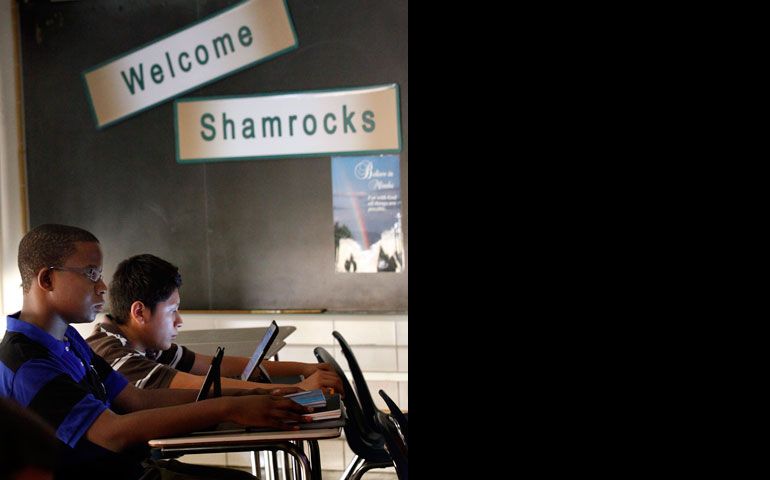 The rapidly growing charter schools "are competitive with Catholic schools," but that should not lead Catholic leaders "to have an automatic negative reaction that charter schools are bad," said Samuel Casey Carter, newly named CEO of Faith in the Future, a new foundation formed in the Philadelphia archdiocese to revive its 14 archdiocesan Catholic high schools and four special education schools.

Sean Kennedy, a visiting fellow at the Lexington Institute, a think tank in Arlington, Va., that joined Catholic University in cosponsoring the seminar, noted that the United States is the only advanced country in the Western world that gives virtually no public support or subsidy to Catholic elementary and secondary education.

Parents who send their children to Catholic schools save taxpayers some $23 billion a year, he said, part of a legacy that is "unparalleled" by the public or charter systems.

Michael Reardon, executive director of the Catholic Schools Foundation in the Boston archdiocese, said part of the problem is that diocesan and archdiocesan policies "have enabled Catholic schools to fail" by subsidizing them but not challenging them enough to find new ways to become self-sufficient and attract new students.

"Blended learning" -- a term that has entered educational argot in the past two or three years, referring to combining more traditional classroom lecture and discussion techniques with computer technology to enhance learning and adapt better to individual students' needs and capabilities -- came up regularly in the discussions, although participants cautioned against uncritical approaches to computer-based learning.

Carter said employment costs form roughly 80 percent of current education budgets and effective use of blended learning can cut those costs by reducing teacher-student ratios while enhancing the students' education. But he warned against assuming that technological fixes are easy or sure approaches.

Joseph Womac, executive director of the Fulcrum Foundation, which in 10 years has raised some $70 million to support Catholic schools in the Seattle archdiocese, said that efforts to preserve Catholic schools should not mean keeping the same models that worked in the past.

In recent years Catholic schools have "lost 40 percent of their market share. ... Our clients are going elsewhere," he said.

He said the leadership and vision of a principal is critical to any school's success, but Catholic schools across the country "pay the principal less than public schools pay their teachers."

He also argued that in their widespread service to children of low-income families, the greatest educational gift Catholic schools have to offer is "God."

Parents of educationally at-risk children "want God" because they realize that if their children grow up with a living faith in God, they are less likely to end up in prison or in other self-destructive lifestyles, he said.

"Catholic education is the only one trying to serve low-income kids with God," he said. "It's what we are; it's why we do it."

Reardon said Catholic schools across the country have been suffering from "benign neglect" for many years, heightened over the past decade by the "financial crisis" facing his archdiocese, Boston, and many other dioceses across the country for a variety of reasons, including the fallout over the clerical sexual abuse of minors.

He said although the Hispanic Catholic population in Massachusetts has been growing tremendously, in a recent study 45 percent of Hispanic Catholics did not even know that the parish they attended had a Catholic school.

"We're our own greatest enemy" in recruiting potential future students to Catholic schools, he said.

Saying that now "the majority" of U.S. Catholic children of kindergarten age are Latino, he said that what is important for the church now is to "hand them the keys to the door and say, 'This is yours. What do you want it to be?' "

Behind the numbers: Religious 'nones' may not be who you think they are

Healing conflicts amid closures and consolidations, a case study

Why are Americans walking away from religion?