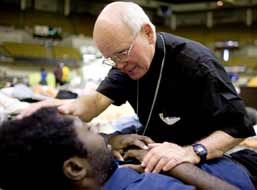 Conventional wisdom holds that history requires years to render judgment on leaders, but this much is sure of New Orleans Archbishop Alfred Hughes: The two greatest catastrophes ever to befall the Catholic church in New Orleans both detonated on his short watch.

Hughes' seven-year tenure opened with the firestorm of a national sexual abuse scandal and ended in painful recovery from the most destructive hurricane ever to hit New Orleans.

Both events bruised the institutional church and altered the ways people relate to it. The crises befell an archbishop who, from the beginning, acknowledged that he was more comfortable doing one-on-one spiritual direction than managing a major community in crisis.

"I am not a public person," he said in one of his first New Orleans interviews in late 2001. "My job as a bishop is the greatest asceticism of my life."

Yet Hughes, who officially retired June 12 when Bishop Gregory Aymond of Austin, Texas, was named as his successor, has said recently that he’s “never been unhappy as a priest or a bishop. I can testify that there has been great grace. That I've been purified. It's been challenging, but deepening."

The storm-damaged archdiocese that Hughes will turn over to Aymond is three-quarters the size of the one he took over, with 104,000 fewer Catholics, 34 fewer parishes and 24 fewer schools. (See related story: Redirected storm aid angers NOLA Catholics.)

The man who was introduced to New Orleans in 2001 was known for his amiability, orthodoxy and work ethic. If he was not a hearty extrovert, he was approachable, ego-free and easy to talk to.

But Hughes never got the luxury of a routine administration.

Three days after Hughes took office in 2002, the clergy sexual abuse scandal erupted in Boston, where Hughes had served as a top aide to Cardinal Bernard Law in the early 1990s. In the eyes of many in his new flock, Hughes' three years in Boston tarnished him at the outset.

"That immediately cost him whatever momentum he might have hoped for," said Jason Berry, a New Orleans author who frequently writes about the Catholic Church.

Some, however, thought he was unfairly maligned.

"I am a priest 48 years," said Fr. Neal McDermott, head of the archdiocese's Department of Christian Formation, which includes its school system. "I've worked half my life with bishops, and I never met a man more dedicated and more committed to his church, to his role as archbishop, than this man."

As the abuse scandal unfolded, Hughes, like bishops elsewhere, promised to overhaul a church value system that once sought to rescue abusive priests' careers and shield them from prosecution. Between 2002 and 2005, he removed at least nine priests credibly accused of abusing children; he searched archives to re-evaluate old sex-abuse complaints; he pledged to call police on receipt of new complaints; and he enforced a promise that one instance of sexually abusing a minor would permanently end the ministry of any priest.

But even as he rolled out those changes, a Massachusetts grand jury review of the Boston archdiocese's conduct singled out Hughes for scathing criticism.

And as he was pursuing policies to build greater safeguards for potential victims, three priests he removed from ministry sued Hughes in civil court, claiming defamation.

Hughes was already carrying the burden of the sex-abuse scandal when the archdiocese was crushed by Katrina, which caused $288 million in damage to Catholic churches, schools and other properties. Insurance settlements would cover only about 35 percent of that toll.

With fewer people, shuttered churches and an ongoing shortage of priests, it fell to Hughes to shrink the church's footprint -- an opportunity, he said, to better conform the needs of parishes with available resources that had been apparent before the storm.

In the end, he closed 34 parishes, including about a half-dozen small but beloved communities and churches that weathered the storm intact. Thousands of parishioners, already suffering deep physical and emotional losses from Katrina, suddenly faced the loss of their churches as well.

Angry parishioners seized two churches and occupied them around the clock for 72 days before the archdiocese called police to forcibly evict them. That produced a public spectacle of arrests that bruised the church in the eyes of a city where the Catholic archbishop usually enjoys a deferential regard.

Berry faulted Hughes' post-Katrina management style, in which he refused to discuss his closure decisions after they had been reached internally.

"I think he turned out to be the worst archbishop since the Great Depression," Berry said. "Leadership is manifested in the trust people have in a person. You've got to earn that. He never did."

In a recent interview, Hughes said the closure plan was necessary and well-conceived, if sometimes flawed by poor communication and other breakdowns in its execution.

"It pains me that people have suffered so much in all this," he said. "I've had crosses to carry. The hardest cross for me is being a public person. I'm not by temperament a public person. And to be crucified publicly, to have my motives impugned, my reputation called into question ..."

Hughes, now 76, said he intends to remain in New Orleans during retirement, and hopes to return to what was once his specialty: one-on-one ministry. He said he knows what it's like to wrestle with God.

"But God has been present. I've never been unhappy. I've never felt that I was abandoned by the Lord. He has stretched me in ways I would never have chosen to be stretched and called forth responses that I would have never imagined I was capable of."

(Bruce Nolan writes for The Times-Picayune in New Orleans.)

Shuttering of Philadelphia newspaper inspires nostalgia for how things were

Historic flooding in Louisiana has changed region forever, many say