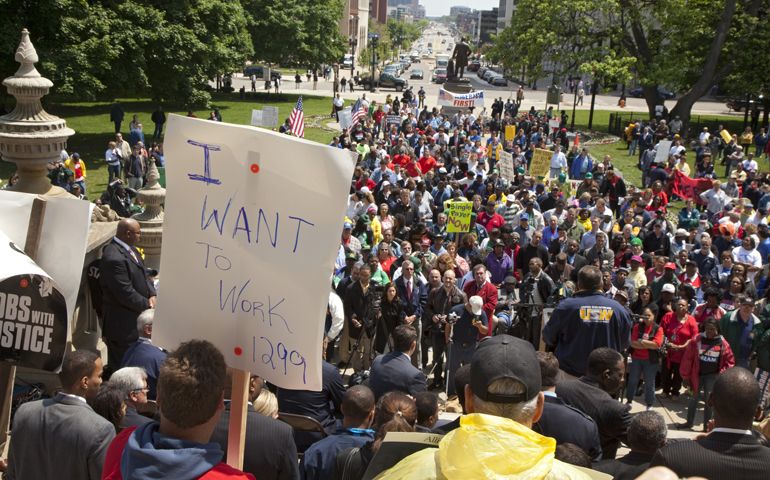 Washington — The rekindled alliance between labor and the Catholic church received the equivalent of an imprimatur Monday when Washington Cardinal Donald Wuerl in an opening address during an event at AFL-CIO headquarters declared that Catholic social teaching "explicitly recognizes organized labor as instruments of solidarity and justice."

The relationship between religion and labor is nothing new. For Catholics, the official link goes back to Pope Leo XIII's landmark 1891 encyclical Rerum Novarum, and popes since have spoken forcefully on workers' rights, especially the right to organize.

Of late, however, there is considerable evidence that the relationship is advancing in new ways, spurred in part by the example of Pope Francis and by a reaction against cultural forces opposed to unions and advancing a libertarian ethos that, in its most aggressive expressions, has little tolerance for discussion of the common good.

Wuerl's address kicked off the second seminar headlined "Erroneous Autonomy," organized by the Institute for Policy Research and Catholic Studies at The Catholic University of America. The first, held a year ago, discussed "The Catholic Case Against Libertarianism" and featured Cardinal Oscar Rodriguez Maradiaga, archbishop of Tegucigalpa, Honduras, and chairman of the pope's Council of Cardinals.

At this year's event, billed "A Conversation on Faith and Solidarity," speakers repeatedly remarked on the similarities between labor and religion in their approaches to the idea of solidarity. In his introduction of Wuerl, AFL-CIO president Richard Trumka, a lifelong Catholic enamored of Pope Francis and his emphasis on workers and the poor, said, "Solidarity is the core value of the labor movement and of the tradition of Catholic social teaching from which Pope Francis speaks. Solidarity is how we express our belief in the value of every person and the essential nature of the bonds we share as humans."

That bond is imperfect at times, Trumka said. "Far too often," he said, labor has "failed to see all of our brothers and sisters. Too often, we excluded our brother and sister workers because of their immigration status, gender, ethnicity, race, religion and sexuality."

Solidarity, Wuerl said in his address, grows out of the church's social justice tradition, which revolves around "the dignity of the human person; the value of human work; the understanding of the communal nature of human life and, thus, the rights and responsibilities that are a reflection of human solidarity, a priority concern, even love for the poor and vulnerable."

In practical terms, solidarity depends upon support from the greater community, and Wuerl, a native of southwest Pennsylvania and a former Pittsburgh archbishop, made the point with his own experience. Some years ago, as he was headed for a local store and preoccupied with other matters, he heard someone say sternly, "Father, please." He looked up and saw a picket line that he was about to cross. He stopped, said, "Thank you," and moved on. He said the lesson he had learned early in life in this heavily unionized section of the state was respect for the picket line. His grandfather, he said, had once told him, "Never cross a picket line. It's all we have."

"The efforts to stand together on behalf of all human development, to be inclusive in our outreach to all people, to the commitment to protect the environment and our respect for all human life, including immigrants coming into the country, are the new picket lines of today which we ask all, with us, to respect," he said.

In his response to Wuerl, Fr. Clete Kiley of Chicago, director for immigration policy of UNITE HERE, a hotel and restaurant workers union, said solidarity "is a whole lot more than the name of a labor union in Poland." The term, he said, conveys a reality that is dynamic and that "takes shape in new and dynamic ways all the time: at our kitchen tables, in our local parishes and union halls, in the broader civic community, the nation, and beyond to the entire human family."

Kiley took on those who say they are "confused" by the pope by ticking off a list of very direct statements from Francis' apostolic exhortation, "The Joy of the Gospel," regarding the poor, the common good, economics and the dominance of the market. "One day in this building, a guy stopped me and said, 'Father, I am a hard-core Southern Baptist from West Virginia. And I never thought I would think this, let alone ever say it, but I like your pope.' He wasn't confused. Hasn't this happened to all of us?"

Kiley said he thinks what people are expressing is more discomfort than confusion.

"The dignity of the human person and the common good rank higher than the comfort of those who refuse to renounce their privileges," said Kiley, quoting Francis.

He said he would like to put that sentiment on a card and send it to those who say they are confused, to "the disciples of Ayn Rand ... and to all the titans of the economy that excludes ... to all those who still cling to trickle-down theories and the absolute right to unrestricted free markets."

Kiley said he would ask them "if they are sure they are not just globalizing indifference. And I'd like to send this card to those think tanks that still think you can be a Catholic and a libertarian -- the real cafeteria Catholics. I'd like to tell them the cafeteria is closed."

Solidarity, however, places demands on both labor and the church to go beyond their own current structures and to acknowledge the growing population of immigrants, especially Hispanics, who are changing the face of the workforce and the congregations in the pews.

Hosffman Ospino, a professor at Boston College's School of Theology and Ministry and a principal investigator of major studies of Hispanic ministry and Catholic schools serving Hispanic students, said the growing Latino/Latina population in the United States posed a compelling challenge for both church and labor.

"The future of the Catholic church in the United States is intimately linked to the Latino/Latina experience and what they bring," he said.

Ospino said while it is incorrect to think of the Hispanic experience as singular -- in the United States, the inclusive term applies to more than 20 distinct cultures whose members exist along the political and socioeconomic spectrums -- one characteristic is common to that diversity: a communal ethos, he said, that innately understands solidarity.

While in the United States, the idea of solidarity "is something to be achieved," among many other cultures -- African, Asian and Latin American, for example -- solidarity grows out of experiences of "deep communal connection," he said. And often, those connections are forged in socioeconomic conditions characterized by "poverty and conditions of disadvantage."

Miners in Kentucky are still feeling the hurt