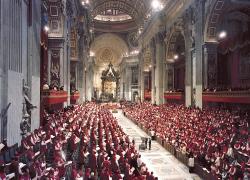 As the church marks “The Year of the Priest” from June 2009 to June 2010, it is worth noting that a whole generation of extraordinary priests is now passing from the scene into retirement or final rest.

The funerals of priests ordained in the years preceding or following the Second Vatican Council, between 1956 and 1968, are occurring more frequently, and they occasion eulogies that profile men who served the church during a period of dramatic transformation that was, in the decades following the end of the council in 1965, both sanctioned and sabotaged by official church leadership. Pope John XXIII’s bold renewal met growing resistance during Pope Paul VI’s implementation, then revision and reversal under Pope John Paul II.

The men on the ground, in parishes and diocesan offices, were told by their returning Vatican II bishops to embody and teach the renewal to millions of Catholics who may have felt that they had gone to bed in the 16th century under an ecclesial monarchy and were waking up in a 20th-century spiritual staging area poised to transform the modern world.

For young priests who saw many of their classmates and even mentors leave the seminaries and rectories in the wake of the council, the decision to stay and take up the challenges of implementing the renewal was fueled by an idealism that marked the larger culture during the 1960s.

The middle years of the reform (1970s and ’80s) meant long hours, endless meetings for pastors and all church ministers, devising and implementing programs to evangelize and catechize both older Catholics and new generations of seekers to share the church’s rich traditions in new ways that kept pace with modern media, rapidly changing social mores and consciousness-raising. From exhilaration to exhaustion, discouragement to renewed determination, priests faced their own life-stage issues as they served an evolving church through successive waves of crisis and change.

The diverse, complex work in progress we know today as the Catholic church is in large measure the fruit of their labors.

Telling their stories is not easy. As many priests know, it is best not to leave a funeral eulogy to chance, lest one be buried under false pretenses, a saccharine glaze of clichés about holiness, heroism and heaven instead of an honest assessment of a real life lived.

Fr. Norm Rotert, retired after serving some 50 years in the Kansas City-St. Joseph, Mo., diocese, is a sought-after eulogist who has presided over and preached at the funerals for many of his brother priests. He offers unabashed praise for their status as “Second Vatican Council priests,” celebrates their collaboration with their bishops in implementing the council. In praising them, Rotert does not have to dwell on what everyone in the pews knows -- of their suffering and frustration under an institutional church they served so faithfully that now seems to regard them and their work as off the mark from a current emphasis on a more transcendent church served by a more ritually oriented priesthood. For Rotert and other conciliar veterans, their story should not be lost as the last witnesses to Vatican II depart.

For a tale of faithful service and official humiliation, the story of Raymond G. Hunthausen, retired archbishop of Seattle, comes to mind as emblematic of the experience of many activist priests.

Hunthausen, 88, is the last surviving U.S. bishop who attended Vatican II. He came home from the council in 1965 determined to invite full collegiality at every level within his archdiocese, to be a pastor first in approaching complex ethical questions, and a strong advocate for peace and justice. For this and for his challenge to the Reagan administration’s nuclear arms buildup in the early 1980s, Hunthausen was subjected to a smear campaign by opponents inside and outside the church, which attracted a Vatican investigation, the appointment of a caretaker auxiliary bishop while he was still in office and then, after years of implied censure, exoneration.

The roll call of other high-profile Vatican II bishops and priests who fared no better is long. Chicago Cardinal Joseph Bernardin, Bishop Raymond Lucker of New Ulm, Minn., and Bishop Kenneth Untener of Saginaw, Mich., are among those pummeled in life and praised in death for their loyalty, hard work, holiness and humanity.

Funeral eulogies gave us glimpses of Bernardin, exhausted and falling asleep as he was driven from one parish event to another, of the humility that astonished journalists covering his ordeal under a sex-abuse accusation and subsequent exoneration, or his patient absorbing of attacks by fellow bishops for his Common Ground initiative, or of his final ministry among fellow cancer patients.

Eulogists gave us the down-to-earth Untener, who announced his role as bishop with the words, “Hello, I am Ken and I am going to be your waiter.” He was the bishop who lived out of his car, or in every rectory in the diocese in order to know his priests better.

In death, Lucker was praised for his respect for women, his openness to their leadership skills as pastoral administrators in his priest-strapped diocese. It was for this openness and other liberal tendencies that Lucker was passed over, some said, for bigger jobs in more prominent places under John Paul II.

In perhaps one of most moving tributes to a fallen Vatican II priest, Dr. John Page spoke at the 2005 funeral for Msgr. Fred McManus, who spent five decades serving liturgical renewal in the church as teacher, canonist and consultant, only to see much of his work dismantled and discarded in the twilight of his long career.

“Fred was never one for self-pity,” Page said. “But he did experience hurt and suffered quietly from it; so often it came in unexpected and insensitive ways. But clearly these recent years were his time of greatest trial. He was disappointed, discouraged and dismayed by the restructuring, reordering, reconfiguration of so much that he, along with many others, under the direction of the bishops, had build through their selfless, faith-filled service. Yet through it all, Fred remained so deeply loyal, so faithful to his baptism, to his priesthood, to the council, easily the defining moment of his long life, and to the work of liturgical renewal.”

The subtext of McManus’s ordeal was the larger struggle between supporters and opponents of Vatican II that defined the charged atmosphere many priests served in after the council.

In his 2007 book A Challenging Reform: Realizing the Vision of the Liturgical Renewal (Liturgical Press), Archbishop Piero Marini, personal liturgist to Pope John Paul II and Vatican insider, wrote that efforts to halt the reform of the liturgy as the key to checking reforms overall, began even before the council ended in 1965. The result was an enervating decades-long struggle between opponents of the council and those celebrating Vatican II as a mandate for the long overdue renewal of the church.

Conciliar changes, such as regular synods to promote collegiality between world bishops and Rome on matters of church governance, autonomy for regional conferences of bishops charged with implementing liturgical renewal, vernacular translations, enculturation, and greater participation by the laity, were slowly eroded as Vatican bureaucrats again took control.

Under Popes John Paul II and Benedict XVI, claiming threats to the church’s identity from secularism and relativism within and from Islamic fundamentalism in Europe and evangelical Protestantism without, Rome set a course hard right toward a more distinctive “Catholic” identity, purging theological creativity and pastoral innovation, reasserting centralized control, exclusive claims on truth, more discipline within the ranks and a more mystical, ritual priesthood highlighted by eucharistic devotion and Marian piety.

In a talk given at The Catholic University of America in 2005, a month before his death, Msgr. Philip Murnion, founder and longtime director of the National Pastoral Life Center, reflected on the challenges facing clergy to maintain a healthy balance between three essential aspects of their ordained roles as pastors, presbyters and priests.

Murnion noted how exhausted many pastors were under their administrative loads as the priest shortage deepened. He mourned the loss of supportive presbyteral communion -- diocesan clergy as the body of ministers sharing the responsibility of the bishop. He noted a new adversarial dimension to this relationship after the bishops’ meeting in Dallas in 2002, when the hierarchy seemed to make “problem priests” the main focus of the clergy sex abuse crisis while insulating themselves from liability.

Finally, Murnion noted that spiritual development of priests to be “guardians of the sacred” was often undernourished, but that isolating them as unique (“ontologically different”) missed their need to ground their holiness and health in the community, in pastoral ministry and in relationships with others, including lay men and women.

Murnion was providing an overview on what has become a deepening crisis for today’s priests, overworked, in conflict with their own leaders, divided among themselves into what one priest in a recent unpublished but widely circulated e-mail called the standoff between “Vatican II priests” and the “John Paul II priests” in every diocese.

We should not have to bury someone to recognize their value to the church. But those who have completed their journeys leave behind, in the eulogies preached over them, a list of characteristics we can treasure and apply to the clergy the church needs today. Ordinary parish priests, known in their own dioceses for fighting the good fight to the end, have always shown these qualities.

As time-tested and supported by a growing cloud of witnesses who walked the walk, such a profile might be useful to priests just starting out in this “Year of the Priest,” and for the church as a whole.

Pat Marrin is editor of Celebration, NCR’s worship resource, and, in the interests of disclosure, a former priest.

Catholic health system gets into insurance