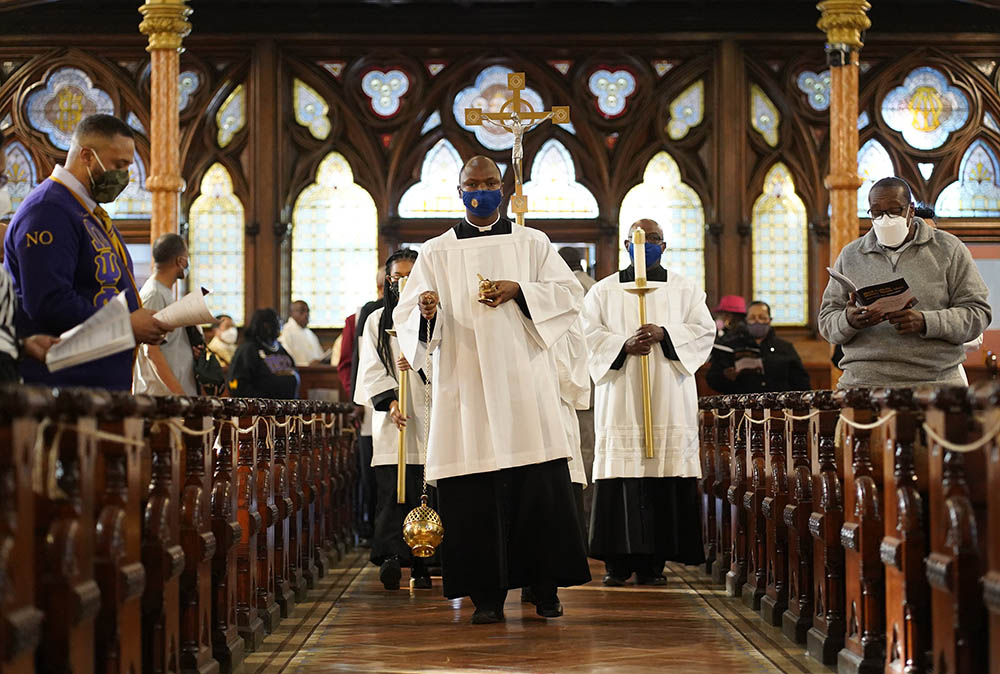 Toby Offiah, a seminarian of the Diocese of Brooklyn, New York, leads the opening procession during a Mass marking Black Catholic History Month Nov. 21, 2021, at Our Lady of Victory Church in the Bedford-Stuyvesant section of Brooklyn. (CNS/Gregory A. Shemitz)

Black Catholics are more likely than their white or Hispanic counterparts to say that opposing racism and sexism is essential to being a faithful Christian, according to a Pew Research Center survey released March 15.

The survey also finds that Black Catholics rely more on daily prayer and Scripture reading, engage in charismatic-style worship at Mass more often, drive longer distances to attend religious services, and are less likely to hear sermons about abortion than their white and Hispanic coreligionists.

The survey's findings highlight how the religious beliefs, practices and experiences of the approximate 3 million Black Catholics in the United States — about 4% of the nation's Catholics — differ from their Protestant counterparts and are often distinctive from other racial and ethnic groups in the Catholic Church.

For example, Black Catholics are more likely than white Catholics to say it is "essential" that sermons address political topics such as immigration and racism, and that churches should teach practical job and life skills and assist people who need help with housing, food and bills. 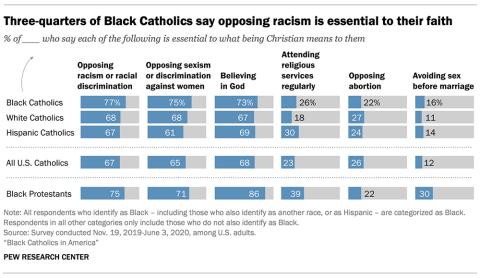 Four in 10 Black Catholics said they had heard a discussion at church about race relations or racial inequality during the 12 months leading up to the survey, compared with 29% of Hispanic Catholics and 18% of white Catholics.

About three-quarters of Black Catholics said opposing racism and sexism, as well as believing in God, are essential to being a Christian. Smaller percentages said regular attendance at religious services (26%), opposing abortion (22%) and avoiding premarital sex (16%) were essential to their Christian faith.

Most Black Catholics — 71% — said abortion should be legal in all or most cases. More than eight in 10 Black Catholics — and 87% of Hispanic Catholics — said that immigrants "strengthen our country because of their hard work and talents." By comparison, only 56% of white Catholics agreed with that statement.

On homosexuality, the survey found that Black Catholics (78%) are about as likely as white (76%) and Hispanic (84%) Catholics to say that society should accept it. Only 57% of Black Protestants took that position.

The Pew survey highlighted other differences in religious beliefs and practices between Black Catholics and Protestants, who make up most of the Black Christians in the United States. The survey indicates that Black Protestants are more likely to pray at least daily, to say religion is very important in their lives, and to read Scripture at least once a week.

While agreeing that opposing racial discrimination is essential to their Christian faith, Black Protestants were more likely than Black Catholics to view regular church attendance and avoiding sex before marriage as essential to their religious identity, according to the Pew survey. 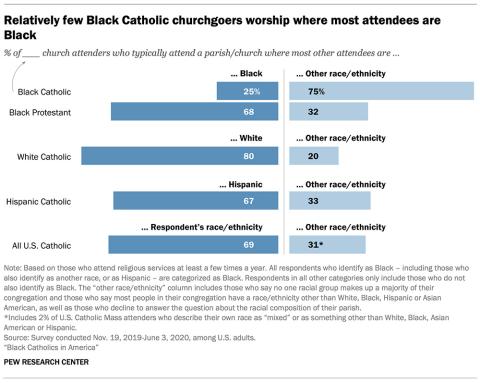 By comparison, 80% of white Catholics worship in white-majority congregations while 67% of Hispanic Catholics attend Mass where most attendees share their ethnicity, the Pew survey found.

The survey also indicates that 41% of Black Catholics travel more than 15 minutes to get to their parishes. Only about 26% of white Catholics and 30% of Hispanic Catholics reported driving as long to attend Mass.

Like many Black Protestants, especially those who worship in some evangelical and Pentecostal churches, two-thirds of Black Catholics said the Masses they attend often feature worshippers calling out "amen" and other expressions of approval. Black Catholics are also more likely than white Catholics to report praying in tongues and shouting, dancing and jumping spontaneously during Mass.

If they wanted to find a different church, the Pew survey found that nine in 10 Black Catholics would prioritize a welcoming atmosphere and inspiring sermons. Only about a third of Black Catholics said it would be at least somewhat important for most of the other attendees to share their race.

The survey also highlights historical demographic trends, noting that the nation's Black Catholic population grew in the early and mid-20th century when Black Americans migrated from the rural South to cities with large Catholic communities that had thriving parochial school systems.

Higher percentages of those immigrants are Catholic; only about 5% of Black adults born in the United States are Catholic.

However, the Pew survey indicates that more Black adults have left Catholicism than have converted to the faith. The survey reports overall that 4% of Black Americans say they were raised as Catholic but no longer identify as such. By comparison, only 1% of Black adults are converts to Catholicism.

While noting that Protestantism has historically "dominated" the Black religious landscape in the United States, the Pew survey notes that Catholicism "has long had a significant presence among Black Americans."

The survey notes Venerable Pierre Toussaint, a 19th-century Haitian American who was born in slavery who went on to become a philanthropist and the first lay Catholic to be buried in the crypt at St. Patrick's Cathedral in New York City.

A version of this story appeared in the April 1-14, 2022 print issue under the headline: Black Catholics say fighting racism 'essential' to faith.