US bishops open assembly with changes in emphasis, tone 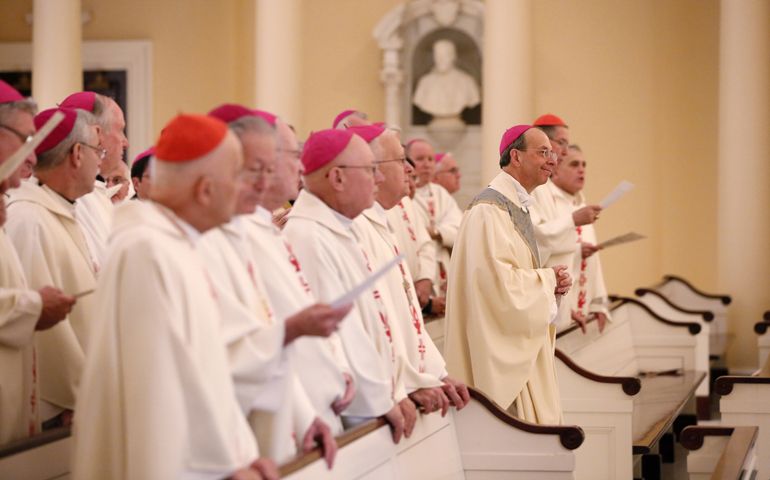 Members of the U.S. Conference of Catholic Bishops gather Monday for Mass at the Basilica of the National Shrine of the Assumption before the start of their annual fall meeting in Baltimore. (CNS/Nancy Phelan Wiechec)
This article appears in the Fall bishops' meeting 2013 feature series. View the full series.

Baltimore — The opening of the U.S. bishops' annual fall assembly Monday morning was marked by noted changes in tone and emphasis for the prelates, who have focused extensively in the last two years on a fight against the Obama administration's implementation of the health care law.

New York Cardinal Timothy Dolan, who is stepping down this week after three years as the conference's president, barely mentioned that fight in his presidential address, instead focusing on the issue of religious freedom globally.

Likewise, Archbishop Carlo Viganò, the Vatican's ambassador to the U.S., focused on the role of bishops as witnesses who adopt a "noticeable lifestyle characterized by simplicity and holiness of life."

Quoting extensively from Pope Paul VI, Viganò urged the American bishops to be witnesses rather than teachers. If a person listens to teachers, "it is because they are also witnesses," he said.

Mentioning a meeting he had with Pope Francis in June, Viganò said the new pope told him that he "wants pastoral bishops. Not bishops who profess a particular ideology." One of the nuncio's jobs is preparing for the pope the "terna," the list of nominations to fill vacancies in the ranks of bishops.

Viganò also quoted from Francis' meeting this summer with bishops in Brazil, where the pontiff said, "The church is never uniformity but diversity harmonized in unity, and this is true for every ecclesial reality."

"We should also ask ourselves today a question posed by Pope Francis to the bishops of Brazil," Viganò told the Americans. "Are we still a church capable of warming hearts?"

Viganò and Dolan spoke Monday morning at the opening session of the U.S. bishops' annual fall assembly. The bishops are meeting in Baltimore through Thursday.

In his address, Dolan only mentioned in passing the bishops' struggle with the Obama administration over a mandate from the Department of Health and Human Services requiring coverage of contraceptive services in health care plans.

Shifting to global issues of religious freedom, the cardinal mentioned struggles Christians face in places like Syria, Zanzibar and Egypt.

"Our good experience defending religious freedom here at home shows that, when we turn our minds to an issue, we can put it on the map," Dolan said. "Now we are being beckoned ... to extend those efforts to the dramatic front lines of this battle, where Christians are paying for their fidelity with their lives."

Speaking at a press conference following the morning session, Dolan said his focus on issues of religious liberty globally was not meant to indicate the U.S. bishops were not united regarding their position on the health care law in the U.S.

The bishops have "achieved such unity ... that we've got to go further," he said.

When he meets bishops from around the world, Dolan said, they frequently thank him for the Americans' focus on religious liberty but ask: "Could you expand your solicitude to us?"

Viganò's references to Francis' style and tone were not the only ones Monday morning.

Francis was cited and quoted several more times as the bishops moved on to other agenda items, particularly discussions of the Vatican's request for wide input on a planned global meeting of bishops on the family called for next October and how to address poverty in their strategic planning document.

Former bishops' conference president Archbishop Joseph Fiorenza took to the floor to ask if the conference could "make it a priority" to support efforts to eliminate poverty.

Fiorenza said such a priority would "help our conference be on record in trying to achieve what Pope Francis has put before us, to be a church for the poor and a church of the poor."

Fiorenza, who is the retired archbishop of Galveston-Houston, was responding to a presentation by Seattle Archbishop J. Peter Sartain, chairman of the conference's committee responsible for creating their strategic plan. Sartain gave a short report on the development of that plan and what priorities it included.

Sartain replied to Fiorenza that "all of us have been struck and moved by Pope Francis' call" and have "great awareness" of it.

The bishops spent about 30 minutes discussing next year's Vatican synod, which is to be held Oct. 5-19, 2014, and is to focus on issues of family life.

At question was how both the national conference and individual bishops are responding to a questionnaire the Vatican has sent in advance of the synod about how lay Catholics understand the church's teachings on things like same-sex marriage, divorce and contraception.

Archbishop Lorenzo Baldisseri, the secretary of the Synod of Bishops, asked bishops' conferences in an Oct. 18 letter to distribute the questionnaire "immediately" and "as widely as possible."

Several prelates -- including Portland, Ore., Archbishop Alexander Sample and Boston Cardinal Sean O'Malley -- took the floor to say they discussed the survey with their diocesan pastoral councils and distributed it to parish pastoral councils for wider discussion.

Philadelphia Archbishop Charles Chaput said he received several emails from people who "expect to do this because the Holy Father wants it."

Spokane, Wash., Bishop Blase Cupich said he wanted to encourage the bishops to consult women religious when working on the questionnaire as they are "so often a part of people's married and family lives."

After the end of the allotted 30 minutes, the bishops moved on to their next agenda item, but with the understanding they would discuss the synod and questionnaire in executive session Wednesday.

After a motion on the floor from retired Washington Cardinal Theodore McCarrick, the bishops also voted Monday to endorse a recent letter from Dolan calling on the U.S. Congress to pass comprehensive immigration reform.

Parish | US bishops open assembly with changes in emphasis, tone