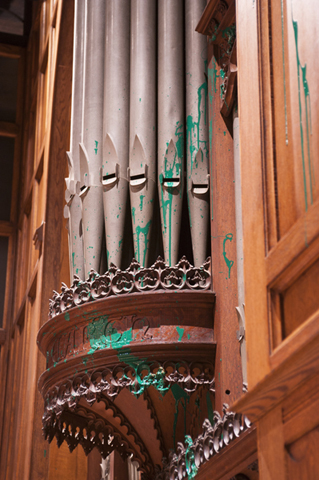 The arrest follows similar vandalism Friday to the Lincoln Memorial and a statue near the Smithsonian Castle on the National Mall. Police are testing paint samples to determine whether the three incidents are connected.

Police charged Tian Jiamel, who has no permanent address, with one count of defacing property.

Cathedral officials discovered wet paint strewn over the Bethlehem Chapel's organ console and casework about 2 p.m., leaving them to believe the vandalism was recent, according to spokesman Richard Weinberg. The chapel was closed, District of Columbia police were called, and the cathedral was searched.

The cathedral is still recovering from a rare 2011 East Coast earthquake that damaged the nave's vaults.

Weinberg said a crew worked on cleanup Monday night. The estimated cost of paint removal and repair is $15,000.

The Bethlehem Chapel is on the basement level, the oldest part of the cathedral. It contained the original burial site of President Woodrow Wilson, who died in 1924. His tomb was moved to the cathedral's main level in the 1950s.

Across from the Smithsonian Castle, a statue of Joseph Henry, the first secretary of the Smithsonian Institution, was defaced with green paint Friday, the day the Lincoln Memorial was vandalized, the U.S. Park Police said Monday.

The granite base of the statue was painted with a series of unintelligible symbols. It wasn't clear exactly when the vandalism occurred.

WUSA-TV also reported on witnesses to the Lincoln Memorial vandalism who have photos and may have been the first to spot the fresh green and white paint early Friday.