Young Catholics accept the church as is 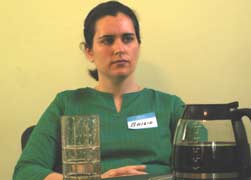 The latest installment: In Search of the Emerging Church

Young people are arguably the most studied, analyzed and coveted group in the Catholic Church.

If churches conducted auctions for members, the bids for them would shoot through the roof. Everyone wants them. They are the future. At the same time, everyone wonders where they are and how to keep them if they dare to darken the door of the local church.

In interviews earlier this year with young Catholics (most were in their 20s and 30s, two were in their mid-40s) at Our Lady of Czestochowa Parish in Jersey City, N.J., it seemed clear that some ideas about church membership are definitely age- or generation-specific. Younger Catholics appear reluctant to use such labels as conservative or liberal in describing themselves or others, while traditional pieties and the church's tradition itself can play an important role in someone's decision to become Catholic.

Those around the table, all of whom had chosen to become active in a particular Catholic community, said they spent little time worrying about hierarchical matters or many of the hot-button issues that might concern those of an older generation. In general terms, they had opted for Catholicism for a host of reasons and, while not ignoring the problems or controversies, did not allow them to get in the way of their participation in church life.

Whatever their inclinations or path to Catholicism, they present little upon which the church can base presumptions today. "I think the church has to earn parishioners to come," said Bridget d'Souza, one of the young professionals who joined the conversation in May at Our Lady of Czestochowa parish in Jersey City, N.J.

She was describing a kind of free-market approach to parish selection that applies to groups across generational lines, but particularly to young people without permanent ties to a neighborhood or diocese. No longer can pastors be guaranteed a congregation because of geography. People go where they're both getting fed spiritually, said d'Souza, and where they can feel ownership of the parish and its activities.

It wasn't that way growing up in a place, she said, where people owned their homes for decades and where churchgoing was determined by parish boundaries.

The loss of those physical boundaries seems symbolic of deeper lines and categories that have become less distinct when it comes to deciding on the bigger questions: whether to be religious at all and, specifically, whether to be Catholic.

While the stories of the eight or so people gathered around the table at Our Lady of Czestochowa hardly constitute a scientific sampling of opinion, it is reasonable to suggest that neither are they an aberrant sample. If they are at all indicative of what is occurring among twenty- and thirty-somethings, church leaders might take heart for the institution's future.

Cradle Catholics are finding reason to either continue on in the faith or rediscover it and those of other faiths (in this group a former Presbyterian and former Lutheran) have found reason to join up despite all the scandals and the sometimes contentious debates within the church.

The group at Our Lady of Czestochowa in many ways were reflective of some of the findings in recent studies. In American Catholics Today: New Realities of Their Faith and Their Church, the results of a study conducted by four prominent Catholic sociologists, young adult Catholics are described as different from previous generations in their attitude toward both civil and religious authorities. "They have been taught to think for themselves" and "to take responsibility for their own relationship with God."

While a "sizeable minority" of young Catholics, estimated at about 20 percent, are deeply religious, attending Mass and confession regularly and thinking of themselves as "orthodox," most are less rigid in their observance. "As long as they believe in God, Jesus' Incarnation and Resurrection, and Mary as the Mother of God and as long as they do whatever they can to love their neighbor, they do not feel obliged to attend Mass every week, go to Confession every year or even marry in the church," according to American Catholics.

Ryan Smith is a 25-year-old who grew up in a Presbyterian home in Erie, Pa., but came to Seton Hall University to do a master's degree and converted to Catholicism while a student there. Ironically, in an era that many Catholics might describe as contentious within the church, one of the things that attracted Smith to Catholicism was that dissent could exist without separation. "One of the things about the Protestant faith that really didn't draw me in was the bickering," he said. In Catholicism, he said, "It's not, 'We're going to break off and go here or do that.' There is a strong core that everybody kind of held onto."

The week after the interview, Smith said, he would be headed to Alexandria, Va., to begin working for Catholic Charities USA.

D'Souza and her husband, Devantin, have been members of Our Lady of Czestochowa for three years. Both are cradle Catholics. She grew up in New Jersey, and spent time in the Jesuit Volunteer Corps right out of college. He is from Bombay, India, arrived in the U.S. in 2001 and moved to New Jersey in 2005, they year they were married. They met in business school in Washington and at the time of the interview were working as consultants for the financial firm Deloitte and Touche in New York.

In college, she said, she struggled through a period when she asked herself, "Do I want to be Catholic? Do I want to go into a Protestant denomination?" She said she had felt frustration over issues like the sex abuse and financial crises "that you're not as empowered as you might be in other areas, like with your civic government for instance."

She perceives a certain power in the tradition, in the Mass and the Eucharist. "There is something there that his so powerful, and I think the church has nurtured that. I think for me the church embodies that." In the larger culture she mentioned, Catholic Charities and all the things that the church does. I don' think most people are aware o that. If they were aware of it, all of these other things that are perceived as negative, they wouldn't be as proportionally as negative in my opinion."

Twenty-three year old James Porter had just completed a master's degree at Seton Hall University in diplomacy and international relations. His contact with Jesuits at Loyola College in Maryland influenced his involvement in the church. Regarding divisive issues within the church, he sad "There are things about the Catholic church that are out of my control. I can't do anything about it and it doesn't affect my faith and my belief in God. At the end of the day, it doesn't affect whether I'm going to go to church or not."

But there is a sense, said Carol Vanhouten, a convert from Lutheranism and a reference librarian for a college in Manhattan, in which we all do something about it when "we don't abandon" the church because of scandals or other disagreements. "We've decided that we want to try to make it better, hopefully by staying. The good people who stay are the ones who strengthen the piece as a whole. I think we do sort of contribute in that way."

Parish | Young Catholics accept the church as is