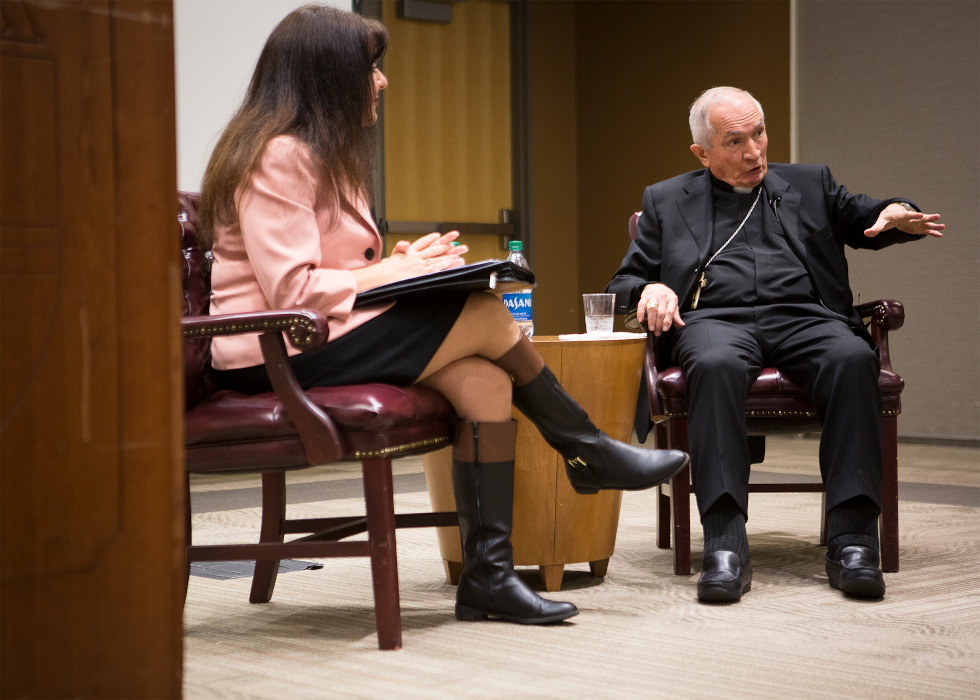 An effort is underway through nongovernmental channels to bring U.S. and Russian negotiators together to discuss new reductions in the countries' nuclear weapons arsenals, an official with the Vatican's Dicastery for Promoting Integral Human Development said during a visit to The Catholic University of America.

Archbishop Silvano Tomasi explained Jan. 30 during a program at the school that the effort involves "a small group of Russian and American experts."

"There is the backing of the church, the Vatican. It is promoted on the organizational level by (the nongovernmental organization) Global Priorities," the archbishop said.

"We are trying quietly to promote dialogue to create the argument that the two governments should talk and, say, by next year we eliminated another 500 warheads on both sides in a verifiable manner, and then to continue the process until all the bombs are eliminated."

Washington-based Global Priorities is an international interreligious organization working to change national and global budget priorities by shifting spending to programs that can alleviate poverty and support human development.

After the program, Tomasi confirmed that such an effort was underway.

"It's a professional group of experts, but with people who are very close to the two administrations and this issue of atomic weapons," he told Catholic News Service. "This group works to prepare the possibility of the official government delegations to talk among themselves and arrive at taking a step further."

In a Jan. 31 email to CNS, he clarified that he was involved personally in the effort, not as official Vatican representative.

Two meetings of the experts occurred in Rome during 2019 and another is planned for Moscow in April, Tomasi said.

"We want to create an environment of dialogue and trust that leads to eliminate more warheads," he said. "It's a progressive movement. It's an incremental approach."

Arnold Kohen, international coordinator of Global Priorities, confirmed to CNS Jan. 31 that the organization is exploring with various church officials ways to bring the two nations that possess more than 90% of the world's nuclear weapons to the negotiating table.

"The essence is that we've been working for about three to four years to do this behind the scenes with the Vatican and the Russians. The net result at this point is that it's positive," Kohen said, confirming the Moscow meeting in April.

The meetings have included U.S. and Russian experts, "people who had previous government experience but are not currently in the government," he said.

The back channel comes as disarmament proponents have undertaken a campaign to bolster support for a five-year extension of the New Strategic Arms Limitation Treaty, which is set to expire Feb. 5, 2021.

The 10-year-old pact, known as New START, set the number of deployed nuclear weapons by the U.S. and Russia at 1,550 each, governed by strict inspection and verification protocols. Both countries are adhering to the treaty's requirements.

Without the extension, there would be no nuclear arms control agreements between the U.S. and Russia in place for the first time since 1972.

There has been little movement to extend the treaty. Russian President Vladimir Putin has said he is willing to sign an extension with no conditions attached. U.S. President Donald Trump has not indicated a willingness to do so, suggesting instead that he would like to see a broader pact that would include China.

Several members of Congress and Pentagon officials support the extension.

Tomasi was in Washington for programs at two Catholic universities focusing on Pope Francis' vision of nuclear disarmament, human development and just peace.

In a morning session at The Catholic University of America, he joined a conversation with Maryann Cusimano Love, associate professor of international politics at the school. He later delivered a lecture at Georgetown University's Berkley Center for Religion, Peace and World Affairs.

The earlier discussion focused largely on the support of the pope and the Holy See for full-scale nuclear disarmament.

Tomasi said Francis' view that the use and even the possession of nuclear weapons was an affront to human dignity emerged when he asked the pope to provide a statement to a 2014 conference in Vienna about the humanitarian consequences of nuclear war.

Conference delegates at first expressed "some hesitation" about the pope's strong call, but their view changed quickly, the Vatican official said.

"The assembly over three days changed their tune and arrived at accepting the message of the pope and formed a committee to develop a treaty to ban all bombs from everybody," he said.

The committee worked to draft the Treaty on the Prohibition of Nuclear Weapons and in 2017 it was passed at the United Nations. The final tally saw 122 nations voting for the ban. Netherlands voted no and Singapore abstained in the final count. The nuclear weapon states of the United States, Russia, China, France, United Kingdom, Pakistan and India as well as numerous countries falling under the nuclear umbrella were not present during the vote. The U.N. has 195 member states.

Tomasi said that hearing from hibakusha, the Japanese survivors of the nuclear bombings of Hiroshima and Nagasaki in August 1945, as the ban treaty was being discussed at the United Nations galvanized nations to approve the agreement.

"We need to keep promoting the knowledge of this group of survivors because they are disappearing very fast," he said. "This will give us direct evidence that no matter the reason a government may have to use this weapon, it makes it impossible to make them acceptable for use."

"If the U.S. destroys all its nuclear weapons tonight and Russia and China does not, we destabilize the world. That can lead to complete destruction. So we need to work toward disarmament and hopefully arrive where we can destroy all the bombs," he said.

Although nuclear weapons have not been used in conflict since 1945, the consequences of testing such weapons in the 1950s and 1960s have been felt by indigenous people around the world, particularly in the Pacific island nations, the archbishop said.

Elsewhere, he said, resources have been expropriated by developed countries at the expense of developing nations. Such practices helped influence the majority of nations to adopt the ban treaty, he said.

The archbishop echoed the pope's call for an "inclusive economy" whereby new business practices are needed to shrink the gap between developed and developing countries so all can share in the earth's resources.

"From our Catholic position, we say that the human family is one. There is one that is created," the archbishop said. "We have a moral sense to make sure that people who are a member of the family are not bad off."

The conversation circled back to nuclear weapons the importance of taking steps to eventually eliminate them altogether.

"We need to reflect and to build up concrete steps. We agree on the goal. No question that the goal of eliminating all the bombs is correct. But how we get there is incomplete. That's my concern, my preoccupation and fear."