The U.S. bishops' call Aug. 16 for an apostolic visitation and lay-involved investigations into sexual abuse and cover-ups was praised by members of the first National Review Board for the Protection of Children and Young People, but at least one member called it "too little, too late." 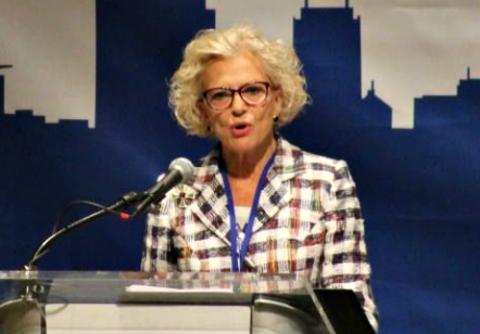 Any internal investigation — even a well-intentioned one — would be ineffective, because "the trust is already eroded and gone," said Anne Burke, an Illinois Supreme Court justice who served as the review board's interim chair until 2004.

Other former board members praised the bishops' proposal, released by Cardinal Daniel DiNardo of Galveston-Houston on behalf of the U.S. bishops' executive committee, as a "good start," though they expressed caution about internal investigations and review boards.

"Only secular authorities have subpoena powers," said Burke, urging all attorneys general and district attorneys to follow the lead of Pennsylvania, where an investigation resulted in a scathing grand jury report exposing decades of sexual abuse and cover-up in six Pennsylvania dioceses.

"That's the only way I see something happening," Burke said.

Others praised the speed with which the bishops released their proposal, just two days after the grand jury report was made public on Aug. 14.

"But the real evaluation will be in what this plan becomes, how it's implemented and its overall effectiveness as time goes on," said Kathleen McChesney, a former high-ranking FBI official who worked with the initial review board as the first executive director of the U.S. bishops' Office for Child and Youth Protection.

"The details will be very important," she said, noting that the press release announcing the proposal did not explicitly mention sexual abuse against "vulnerable adults," such as seminarians.

McChesney thought the bishops' inclusion of laypeople indicated that church authorities had had positive experiences working with laypeople on these issues in the past.

But transparency and accountability need to be explicit — especially in regards to "who knew what and when" about allegations against former Washington Archbishop Theodore McCarrick, McChesney said.

"It will not suffice just to say, 'Here's how we're going to do better in the future.' I suspect that survivors and others will call for measure for accountability."

An apostolic visitation by a Vatican representative — similar to the one by Maltese Archbishop Charles Scicluna to Chile earlier this year — is a good idea, said Nicholas Cafardi, an attorney and original member of the board who served as its chair from 2004-05.

But such an investigation could also be accomplished by an independent group of laity, he said.

Cafardi praised DiNardo, whom he called a "personal friend," for responding quickly with the proposal, which he described as "a great first step."

"But I hope there are no glitches on the way to implementing it," he said.

Cafardi, who works for a Pittsburgh area law firm, said the grand jury report was "a blow to the gut."

"Unfortunately, what comes across in the way bishops handled it is that they were way more worried about the institutional church than they were about the victims," he said.

He said the small number of cases in the Pennsylvania grand jury report that were from after 2002 is evidence that the bishops' Charter for the Protection of Children and Young People, often called "the Dallas Charter," is working.

But Frank Keating, former governor of Oklahoma who served on the review board until 2003, said that bishops need to fully follow the charter, which he always saw as applying to both bishops and priests.

"They need to do what they promised," Keating told NCR, including turning over all allegations to law enforcement as part of "zero tolerance."

"This is destructive to the church, and we simply cannot permit it to occur," he said.

In the proposal, DiNardo, who is president of the U.S. bishops' conference, said a "more developed plan" will be presented to the full body of the bishops at their annual meeting in Baltimore in November.

McChesney is hopeful that meeting will be different than the one in 2002, in which some bishops still fought a zero tolerance policy. But newer bishops and those she has worked with value the charter as an important, she said. "And ultimately I think the bishops will be able to establish an effective process for reporting and responding to adult cases."

But Burke is concerned that both responses — in 2002 and now — are "reactionary," and that the decline in cases in recent years is the result of better publicity and awareness about the issue, not necessarily because of the bishops' new norms.

"Why did it take the charter to say what's wrong and morally correct?" she said. "[The bishops] had canon law and the law of the land. They should have done something without having to have a charter. The rest of us don't have a charter."

And she remains unconvinced that much has changed among church leaders, saying: "I haven't seen anything that's a glimmer of hope here that they're going to be totally transparent."