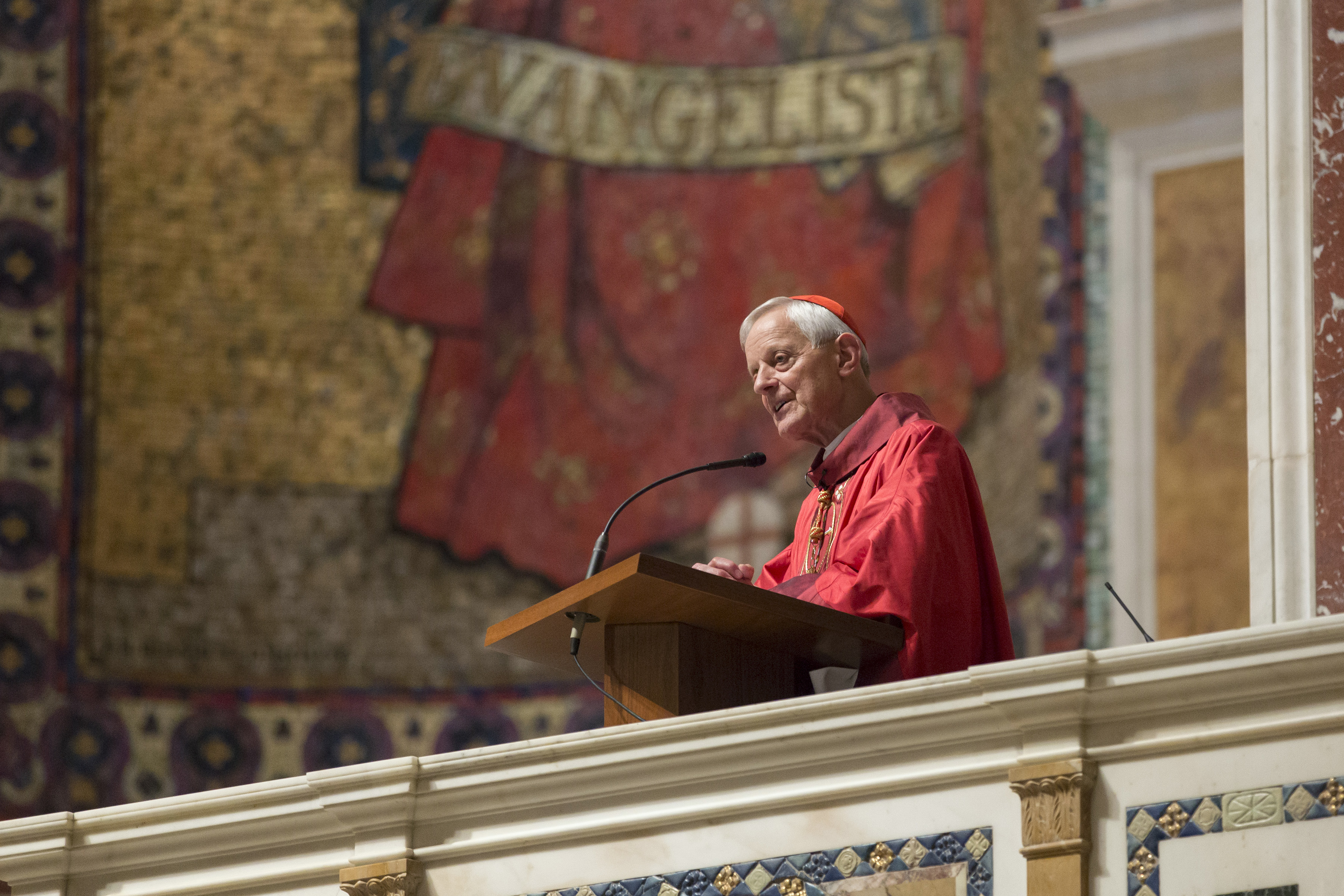 Washington Cardinal Donald Wuerl delivers the homily during a Sept. 14 Mass at the Cathedral of St. Matthew the Apostle in Washington. The Mass, held on the feast of the Exaltation of the Holy Cross, marked the start of a six-week "Season of Healing" for the archdiocese. (CNS/Catholic Standard/Jaclyn Lippelmann)

A "Season of Healing" for sexual abuse survivors began in the Archdiocese of Washington with a Sept. 14 Mass at the Cathedral of St. Matthew the Apostle.

After the opening liturgical procession, Washington Cardinal Donald Wuerl and Auxiliary Bishops Mario Dorsonville and Roy Campbell Jr. prostrated themselves before the altar.

The cardinal said this posture during the Liturgy of the Exaltation of the Holy Cross "is a reminder that the cross of Jesus' crucifixion and death are, for us, where we find healing."

It also reflects a recognition of failure and the need for contrition, he said.

"For the survivors, a starting point has to begin with the church's embrace asking for forgiveness. This is what I do, over and over again," he said. "We turn to the cross with those who have been abused. We join them in their outrage that this has happened. Perhaps our Lord can turn our anger into a commitment to work together to take meaningful actions to bring about a purification that is verified in deeds."

During the Mass, Michael Nugent, a survivor of clergy sexual abuse and a member of the archdiocese's Child Protection Advisory Board, told the congregation how he had been abused by a priest when he was 13 and it wasn't until he was 55 and heard five words that he felt liberated: "It was not your fault."

He said those words helped him to realize: "How could it have been my fault? I was a child of 13 and deeply confused by the actions of this priest" who had abused him.

Nugent, a retired international representative for the International Brotherhood of Electrical Workers, said Wuerl has been working with the Child Protection Advisory Board to develop practical steps forward for the victims of sexual abuse.

His remarks drew a standing ovation from the congregation of about 300.

In his homily, Wuerl said the church's priority in confronting the abuse crisis should be on "those who bear the scars of abuse." He said the "candle of hope" lit during the Mass was symbolic of the time of healing, repentance, solidarity and recognition of dependence on God's grace.

The Mass opened a six-week Season of Healing in the Archdiocese of Washington that Wuerl had proposed in a Sept. 6 letter to priests.

During the Mass, he said the time of healing has started across the archdiocese, with priests, parishes, prayer groups and church organizations praying for God's mercy.

Days before the Mass, Wuerl wrote to priests of the archdiocese, telling them he would meet with Pope Francis and ask him to accept the resignation he presented after turning 75 nearly three years ago. The cardinal said he was doing this "so that this archdiocesan church we all love can move forward" and can experience "a new beginning." The cardinal's Sept. 11 letter was shared so that the Mass for healing would not be overshadowed by questions about his status.

A Pennsylvania grand jury report released in mid-August described allegations of sexual abuse suffered by more than 1,000 survivors over the past seven decades by 300 priests and other church workers in six dioceses in western Pennsylvania, including in Pittsburgh, which was led by Wuerl from 1988 until his appointment as archbishop of Washington in 2006.

After the report was issued, Wuerl expressed sorrow for the survivors of abuse and defended his record in Pittsburgh, but he faced strong criticism, including some protests and calls for his resignation.

In opening remarks at the Mass, Wuerl said: "I ask for healing out of my contrition for wounds that were caused by my own bad judgments."

In June, Catholics in the Archdiocese of Washington learned that their retired archbishop, then-Cardinal Theodore McCarrick, had been credibly accused of abusing a minor 50 years earlier while he was a priest in New York, and that he had been accused of sexual misconduct with seminarians while he was a bishop in New Jersey. McCarrick's resignation from the College of Cardinals was accepted by Francis, who said that prelate could not serve as a priest in public and should live a life of prayer and penance.

In his homily, the cardinal said the grand jury report and other investigations "are evidences of failures on the part of us bishops."

"Out of a righteous anger, we can all pray for that healing reflected in a commitment, resolve and manifest actions rather than just words on the part of church leadership to move in a much more transparent and accountable way, engaging laywomen and laymen alongside pastors and bishops, to begin the healing," he said.

He said members of the Catholic Church, "all of us, can share the pain of the survivors because their wounds have taken place in our spiritual home ... and we expect much more from it."

Near the end of Mass, the cardinal specifically addressed the seminarians, reminding them they had seen the face of a survivor. "Everyone who has suffered abuse has a face, and is a person," he said, stressing that their healing has to be a priority.

He also asked the seminarians to "never ever move beyond the need to say, 'I apologize, I'm sorry.' I do that often, and it makes sense at the foot of the cross."

The cardinal said Nugent's example of forgiveness, understanding and courage shows that "the grace of God touches people."

As he processed down the cathedral's main aisle, the cardinal invited Nugent to walk beside him and they greeted people together after the Mass.

He also said Wuerl "has been a true leader" in the archdiocese's efforts to help survivors of any kind of sexual abuse.