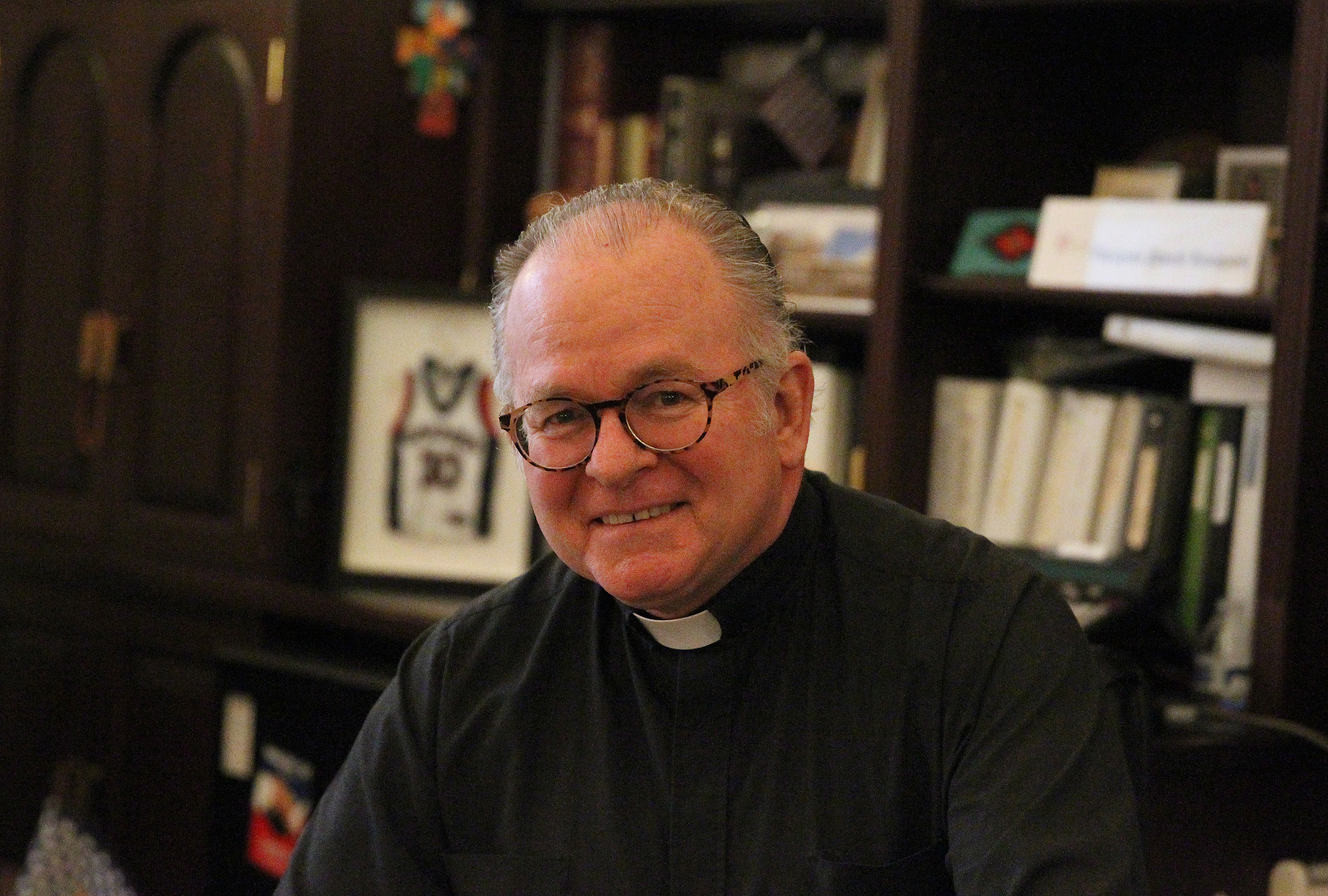 Jesuit Fr. Patrick J. Conroy, in a photo taken May 8, 2017, had been the chaplain of the U.S. House of Representatives since 2011. (CNS photo/Rhina Guidos)

Catholics are expressing outrage over the forced resignation of a priest who has served as the chaplain to the U.S. House of Representatives since 2011.

Jesuit Fr. Pat Conroy resigned at the request of House Speaker Paul Ryan of Wisconsin, according to an article in The Hill newspaper.

"From my work with Fr. Conroy, it was clear that his ministry is bipartisan, and he holds the needs of all – including both Republicans and Democrats — in his heart," Social Service Sr. Simone Campbell, executive director of NETWORK, a Catholic social justice lobby, said in a April 26 statement.

According to The Hill, Conroy declined to comment Thursday, but four sources — two from each party — confirmed that the priest was told he must retire or would be dismissed. His resignation will be effective May 24.

Some House members speculated the resignation was prompted by Conroy's invitation of a Muslim cleric to offer an opening prayer or because of a prayer by Conroy that was perceived as being critical of the GOP tax cut bill.

Campbell said she has "serious questions" about the reasons for the resignation, "and strong objections to the inference that it was because he invited a Muslim cleric to deliver an opening prayer or his words for the common good on the morning of the tax vote," she said in her statement.

Conroy's prayer on Nov. 6 included: "May all Members be mindful that the institutions and structures of our great Nation guarantee the opportunities that have allowed some to achieve great success, while others continue to struggle. May their efforts these days guarantee that there are not winners and losers under new tax laws, but benefits balanced and shared by all Americans."

Some sources thought the prayer indicated Conroy was more aligned with Democrats than Republicans. House chaplains are supposed to be nonpartisan.

Conroy was nominated as the 60th House Chaplain by former Speaker John Boehner of Ohio and was sworn in on May 25, 2011.

A member of the Oregon Province of the Society of Jesus since 1973, he was ordained in 1983 in Seattle. He has a master's degree in philosophy, a master of divinity degree, a master of sacred theology and a law degree, according to his biography on the House chaplain's website.

Conroy practiced law for the Colville Confederated Tribes in Omak, Washington, represented Salvadoran refugees for the USCCB's Immigration Office in San Francisco while studying theology and again worked for the Colville Tribes helping to develop the case for the Tribes' treaty fishing rights in the mid 1980s.

After ordination, he worked with Native Americans, for the national Jesuit Office of Social Ministries and in campus ministry at Georgetown and Seattle universities. He has served as a superior and provincial assistant for formation for his province.

When he was first named nominated as chaplain, Rep. Nancy Pelosi of California, who is Catholic, raised questions about Conroy's connections to the Oregon Jesuit Province, which had just agreed to pay $166 million to victims of sex abuse, but after further vetting Pelosi agreed to his nomination.

The Hill reported that members of Pelosi's whip team were "shocked" to learn of Conroy's ouster, as were Catholic members on both sides of the aisle.

Ryan, who is also Catholic, has appointed Rep. Doug Collins (R-Ga.), an Air Force Reserve chaplain, as well as Reps. Mark Walker (R-N.C.) and Tim Walberg (R-Mich.), both former pastors, to lead the search effort to find a replacement.

A bipartisan group of lawmakers are planning to send a letter to Ryan requesting additional information regarding Conroy's dismissal, the Hill reported.

Said Campbell: "Partisan gamesmanship has no place in the appointment of a faith leader to minister to Members of Congress on both sides of the aisle."