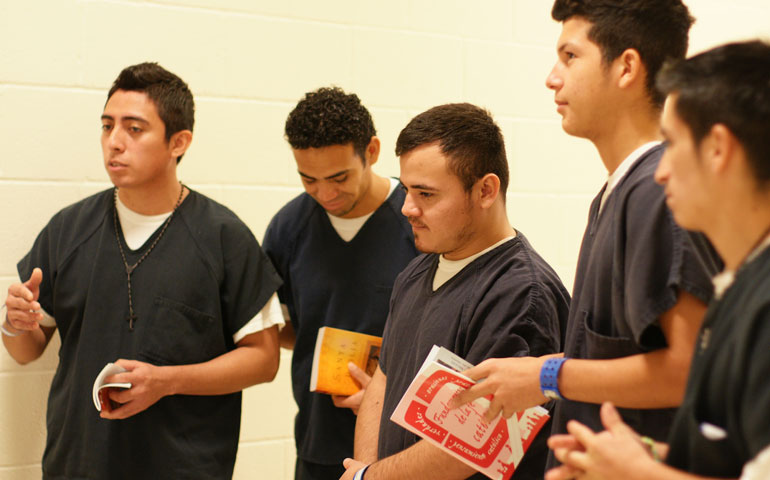 It's a perhaps unsurprising -- though significant -- fact that Catholics represent a sizeable percentage of the total number of undocumented immigrants currently held at more than 250 detention centers nationwide by Immigration and Customs Enforcement (ICE), the agency within the U.S. Department of Homeland Security responsible for enforcing immigration law.

Frequently affiliated with Latino communities inside or outside the United States, these mostly young men experience prisonlike conditions that can leave many feeling emotionally empty, disoriented and disconnected. Depending on the status of immigration court backlogs, which can vary between facilities and may include additional delays related to the appeals process, many detainees spend weeks, months or even years in virtual limbo -- awaiting decisions on civil charges that will eventually lead to deportation or release.

Within this environment, the freedom to practice one's religion isn't taken for granted and offers some detainees the chance to "rediscover the faith that was planted in their hearts as children," according to Esmeralda Saltos, who leads chaplaincy work on behalf of the Seattle archdiocese at the Northwest Detention Center in Tacoma.

The former head chaplain, Lonnie Scott, also alluded to a "spirit of revival" that he often observed during his tenure at the Tacoma facility from 2011 to 2014. "For those whose spiritual lives had gone dormant, attending services at the detention center was like an awakening," he said.

But the reality is that not all detainees have the same access to religious services and materials. Leaders of less-represented religious traditions may not live near certain facilities. Complex scheduling or security issues associated with the facilities -- which can include Service Processing Centers owned by ICE and staffed by a private firm; Contract Detention Facilities owned and operated by a private firm; and county jails granted an intergovernmental agency service agreement with ICE -- can impact detainees' access to religious services and programming.

Opportunities have increased for religious worship and practices through ongoing efforts by ICE to reform civil detention as outlined in 2011 updates to its Performance-Based National Detention Standards. These opportunities are also an outgrowth of the dedication and outreach of countless chaplains and other volunteers.

In fact, ICE recently created a new national religious services coordinator position within the Office of Enforcement and Removal Operations. The new position, according to ICE deputy assistant director for custody programs Andrew Lorenzen-Strait, will enhance the availability of religious services so that "people going through civil detention don't have to check religion at the door."

According to an ICE/nongovernmental-organization working group document, the coordinator "will serve as an expert point of contact for all religious services programs in ICE detention facilities, will work to facilitate detainee access to religious opportunities, and help ensure that detainees have representatives available to them for religious activities and concerns. The overall mission of this position will be to support the agency's nationwide network of facilities and to seek out new ways to enhance overall religious programming and accommodations."

The person tapped for this position, Nathalie Lummert, is an expert on migration policy and was once a member of senior staff at the U.S. Conference of Catholic Bishops, representing the bishops at senior government and congressional meetings.

Prior to joining ICE, Lummert managed nationwide programs for residential and case management services, training, and technical assistance for migrating children and families and for victims of human trafficking. The programs were funded by the U.S. Departments of State and of Health and Human Services, and the U.S. bishops' conference.

"My experience has allowed me to understand the care and experience religious groups have for ministering to people in need, including immigrants," Lummert told NCR via email.

"In my previous position, I worked with the Bishops of the Committee on Migration and was able to see first-hand the impact they had on this special population," Lummert explained. "ICE leadership has demonstrated impressive leadership with creating a contract position for religious services coordination which will be able to enhance pastoral presence for those in custody."

She added, "As the new Religious Service Coordinator, I think what we'll see is even more dialogue with local and national faith leaders to determine how we can improve the experience for those in detention. Each faith group has different religious requirements. For many Catholics, access to the sacraments is important. Of course each facility is different and the resources available to the facilities vary as well. However, we will continue accepting input from detainees and local faith-based leaders to enhance offerings at local facilities."

At the Northwest Detention Center, six Catholic detainees, whose home countries included Mexico, El Salvador and Guatemala, talked to NCR following a Sunday worship service on a recent fall afternoon. The detainees explained that access to the sacraments represents their greatest consolation as well as their greatest sorrow, since many choose to not receive the Eucharist until after they are able to go to confession.

Confession is seldom offered due to a general lack of Spanish-speaking priests in the area who are able to consistently visit the facility.

They also spoke with faint smiles of distant parents and grandparents who had passed down the Catholic faith, as well as of the positive impact that detainee-led Bible studies -- held daily during their free time in various pods throughout the facility -- have had on their spiritual well-being.

"When you are outside, you may not go to church," one detainee explained. "In here, you face the reality. Your heart is in it. You don't take faith for granted. You feel it."

Yet the ability of Catholic detainees to practice their faith can be a challenge for all involved in meeting their spiritual needs. Volunteers await security clearance to enter facilities with holy water and pre-consecrated hosts. Facility personnel are responsible for overseeing religious accommodations such as dietary restrictions; discouraging proselytization among both volunteers and detainees; and balancing time and space constraints with volunteers' schedules and plans for worship.

Less vital, though often equally cherished, aspects of religious education and worship, such as embroidered altar cloths in colors reflective of the religious season or posters of Our Lady of Guadalupe and the Divine Mercy, may be granted permission upon request.

One former Catholic volunteer, Mara Eaton, who led chaplaincy efforts at the Northwest Detention Center prior to Saltos' appointment, remembered how "tears flowed freely" during holiday services with detainees, and singing substituted for symbols -- such as evergreen fronds and candles during Advent -- that she and another volunteer were not allowed to bring into the facility.

The number of Catholics as a percentage of the detainee population at any given time isn't systematically tallied by ICE. Each detention facility maintains its own information relating to the religious affiliations of their detainees for the purpose of religious accommodation, according to Lori Haley, public affairs officer for the Northwest Detention Center.

The overall detainee population has grown from 6,785 in 1994 to a daily detained population of 33,227 in 2014. According to ICE records, among the 1,451 detainees in custody at the Northwest Detention Center in late October, 657 identified themselves as being Catholic at the time they entered the facility. Of those, 587 were male and 70 were female.

Seattle Auxiliary Bishop Eusebio Elizondo, who heads the bishops' Committee on Migration, has traveled extensively to detention facilities as a part of a 2015 report written by the Center for Migration Studies and the bishops' Migration and Refugee Services. The report, "Unlocking Human Dignity: A Plan to Transform the U.S. Immigrant Detention System," calls for an end to private for-profit prison corporations and the establishment of a "truly 'civil' system designed to minimize the use of detention, ensure appearances during the adjudication and removal process, and promote due process and informed decision-making in individual cases."

These efforts have also been joined on the political stage by U.S. Rep. Adam Smith, D-Wash. One of the most culturally diverse regions in the country, Smith's district is also home to the fenced parameters of the Northwest Detention Center. Smith sponsored the Accountability in Immigration Detention Act of 2015, legislation that would, if passed into law, direct DHS to ensure that detained persons are treated in compliance with specific requirements. These include humane treatment, detention facility standards, solitary confinement limitations, recreational programs and voluntary work, and legal access, among other stipulations.

The bill shares similar concerns and calls for reform as the bishops' document and seeks to establish nationwide alternatives to detention programs, requiring that all detention facilities be regularly inspected by DHS as well as by an independent auditor.

The bill would also mandate that the total number of maintained detention beds should be determined by detention needs alone, rather than continue with an appropriations-approved mandate regarding maintenance of a minimum number of detention beds, as is now the case.

Elizondo told NCR that Lummert's appointment is "promising" and "hopeful." But he refrained from directly connecting the establishment of this new position, as well as the selection of Lummert, to greater opportunities in the future for dialogue and partnership between Catholic leaders and ICE relating to institutional reforms and detainees' spiritual needs.

In the meantime, Saltos said, detainees "have a hunger for reconciliation and a desire that I haven't seen outside of the detention center."

"It affects me deeply," the chaplain said. "They ask, when is a priest coming? It's a continuous request. Outside, they could do this. But inside, when you can't come with a priest to fulfill this desire, it's heartbreaking."

A version of this story appeared in the Dec 4-17, 2015 print issue under the headline: Getting religion into detention.