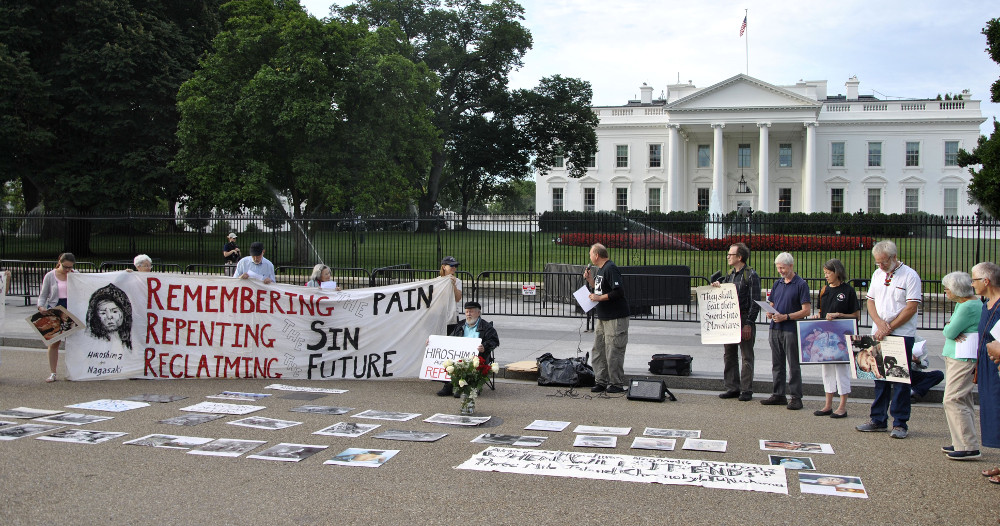 Saying the possession, upgrading and potential use of nuclear weapons was sinful, peacemakers gathered outside the White House on the feast of the Transfiguration and implored the U.S. government to empty its arsenals and embrace a world of peace.

He said the feast of the Transfiguration invites the world to "say yes to the God of life, who commands us to love and not to kill, and no the forces of evil, death and destruction."

Laffin urged the group to recall that the anniversary was a time of "remembering the horror, repenting the sin and reclaiming a future without nuclear weapons" during the one-hour vigil just after sunrise.

The group included members of Catholic movements working to end nuclear weapons. They had gathered to "apologize" for the Hiroshima bombing, and for the bombing three days later of the Japanese city of Nagasaki Aug 9, 1945, both of which culminated in the death and maiming of hundreds of thousands of people, the peacemakers said.

As they gathered, representatives of organizations such as the Maryknoll Office for Global Concerns, Pax Christi USA and the Columban Center for Advocacy and Outreach placed photos of the destruction and the Japanese victims of the bombing on the street in front of the presidential mansion, calling it "shrine of remembrance."

Participants were invited to recommit their lives to "disarming and dismantling the machinery of mass destruction" and offered an apology to bombing survivors, known as Hibakusha.

Laffin criticized the U.S. commitment to spend $1 trillion during the next three decades to modernize its nuclear arsenal. He said such spending is "a direct theft from the poor."

"If the U.S. is to ever truly lead the way to real disarmament, it must first repent for the nuclear bombings of Hiroshima and Nagasaki. Then and only then can the U.S. legitimately ask other nuclear nations to disarm," he said.

Since the end of World War II, U.S. and political leaders have maintained that nuclear weapons are necessary and serve as a deterrent to potential attacks from other countries.

The peacemakers planned a second vigil Aug. 9 at the Pentagon to recall the anniversary of the bombing of Nagasaki.