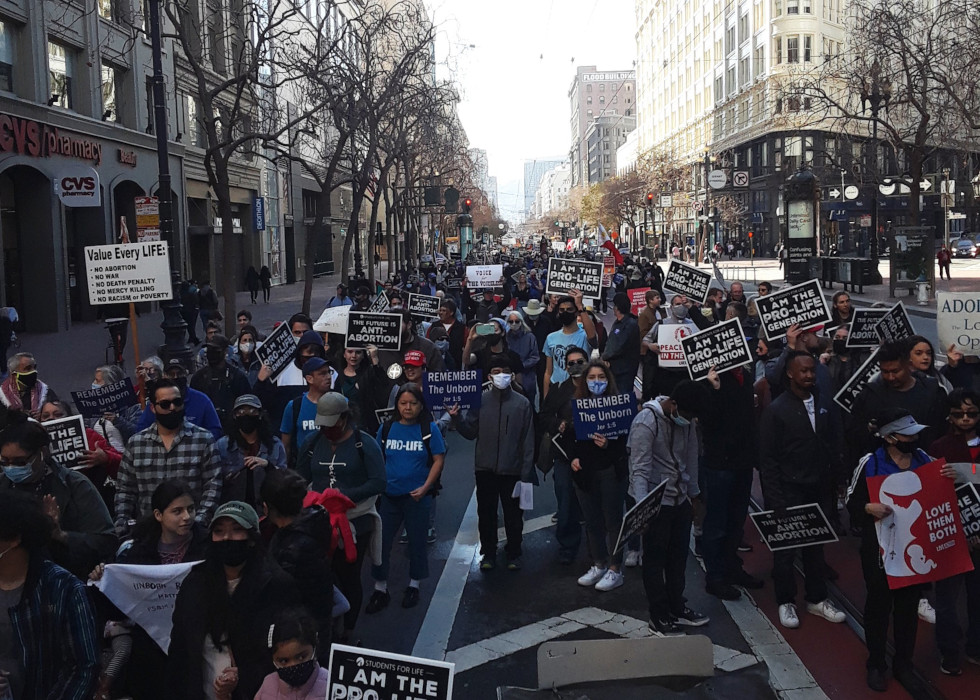 Organizers of the 17th Annual Walk for Life West Coast in San Francisco Jan. 23 expected hundreds of attendees this year, figuring concerns about COVID-19 and political unrest would keep pro-lifers away.

"I guess by now I should know better than to sell the commitment of pro-lifers short. I've never been so happy to be wrong!" said the walk's co-chair Eva Muntean.

Under the current coronavirus restrictions, the cathedral can have only 480 people inside, so worshippers spilled out onto the plaza in front of the church

The Mass came two days after Cordileone rebuked House Speaker Nancy Pelosi, D-California, for her remarks on a Jan. 18 podcast. She accused pro-life voters who supported President Donald Trump in the 2020 election and have opposed his recent impeachment by the House of "being willing to sell the whole democracy down the river for that one issue" — abortion.

"No Catholic in good conscience can favor abortion," the archbishop said in a Jan. 21 statement. "'Right to choose' is a smokescreen for perpetuating an entire industry that profits from one of the most heinous evils imaginable. Our land is soaked with the blood of the innocent, and it must stop."

Fessio gave a moving tribute to Joe Scheidler, the founder of the Pro-Life Action League in Chicago, who died Jan. 18 at age 93. "Well done, good and faithful servant," Fessio said, his voice breaking.

"You are the remnant," Childress said to participants. The African American Baptist minister has been a stalwart of the walk since 2005.

"Remnant" is a biblical reference to what is left of a community after it undergoes a catastrophe.

Meehan told the crowd, "You are a beautiful remnant. You're all standing in the breech for women who have been hurt by abortion, for all the kids who have died by abortion and for all those who need our help today!" 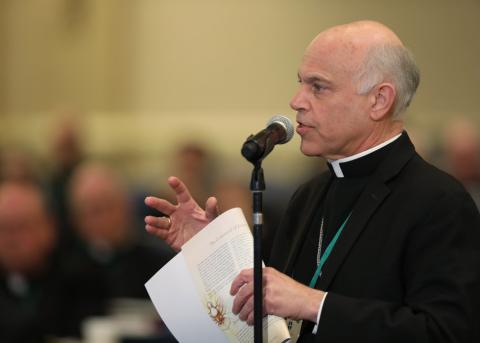 She credited Our Lady and the San Francisco Police Department "for giving us such a safe event!" For the first time in 17 years, the walk encountered no protesters.

"We have walked under three popes and three archbishops" of San Francisco, she added. "Whoever is in the White House, whoever is in the Statehouse, whoever is in the doghouse, we will not falter or fail. We will lovingly and peacefully embrace our responsibilities to the littlest among us and to the women hurt by abortion. If this is what pro-lifers can do in this strange year, all I can say is wait till next year!"

"I think all of us in this time, have come to understand, in a beautiful way, that human life is precious. Also, that life is fragile and brief," Gomez said.

"How we live, how we love, how we care for one another — this is what truly matters. This is what we celebrate each year at OneLife LA. he said. "The sanctity and the dignity of every human life, especially the weak and vulnerable."

Organizers said OneLife seeks to promote a culture of life, where every human life is dignified, especially the most vulnerable and marginalized. This year's theme "The Joy of Life" aimed to "unite communities and inspire positive action that promotes the beauty and dignity of every human life from conception to natural death."

Traditionally, OneLife LA is hosted at the Los Angeles Historic Park in downtown Los Angeles, where thousands of people from all backgrounds in Southern California come together after a mile walk led by Archbishop Gomez beginning at the birthplace of the city at Olvera Street.

"Even though many things look and feel very different this year, the virtual program honors those who continue to serve even during these difficult circumstances," said a news release about the event.

During the celebration, Harvest Home received the second OneLife LA Service Award of $10,000 to supports its mission of transforming the lives of homeless pregnant women and their children by providing housing, support and programs that equip women "to become great mothers."

Participants of the virtual celebration were challenged to give to Harvest Home, which raised an additional $4,000 for the organization that to date has helped over 550 homeless mothers and their children.

In his keynote, Gomez reminded participants of Pope Francis' words in his latest book that they must not "stay silent when over 30 to 40 million unborn lives are cast aside every year through abortion."

"The Holy Father is wise. We cannot be silent. We cannot draw limits to our circle of love. We need to speak for every person in our society who cannot defend themselves. And prenatal human life is truly the most innocent, and the most vulnerable in our society," said the archbishop, who also is president of the U.S. Conference of Catholic Bishops. "Harvest Home, one of our community partners, is a beautiful example of our service to mothers in need and their children."

"So we try to live with joy, with simplicity. We try to widen the circle of love around us — beginning with the way we love and treat one another in our families and homes," Gomez continued. "But our circle of love must always be growing. Real love means always moving beyond our narrow concerns and opening ourselves to the needs of others.

"Each one of us needs to make our love real in walking with the poor, with those who have been cast out, with the least of our brothers and sisters.

Following other OneLife speakers — including Gloria Purvis, who regularly speaks on how racism and abortion are both assaults on the sacredness of human life — the day concluded with the 26th annual "Requiem for the Unborn" Mass celebrated virtually by Gomez.

"From its earliest days, the church has fostered and protected human life," said Los Angeles Auxiliary Bishop Robert E. Barron, who was the homilist. "In fact, the ancient Christian community's radical unwillingness to tolerate assaults on life was a key factor in attracting people to the new movement. This is why, even today, the church stands against any attempt directly to attack human life at any stage of its development."

During the Mass, candles were lit to remembrance of lives lost to abortion in Southern California.