ACA’s popularity grows, even as GOP lauds change to requirement to have coverage 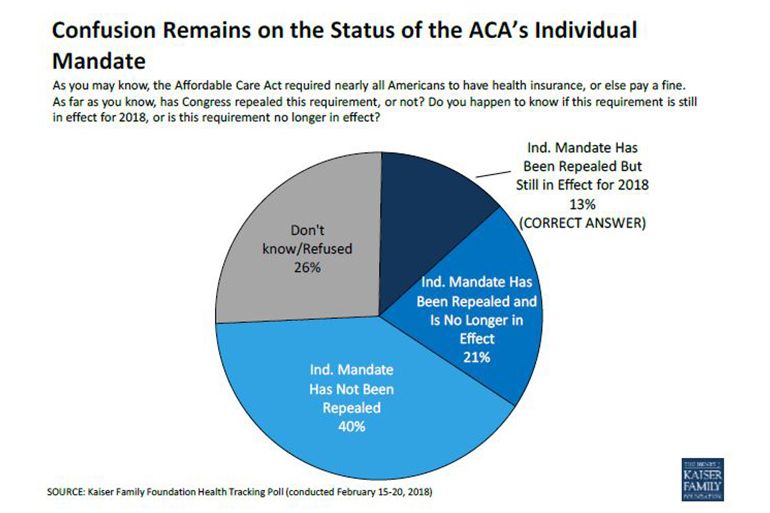 Despite President Donald Trump’s boasting that “we have essentially repealed Obamacare,” a new poll shows the Affordable Care Act is more popular than ever. In fact, many people don’t know Congress repealed the ACA’s penalty for not having insurance.

The poll from the Kaiser Family Foundation found 54 percent of Americans had a favorable view of the 2010 health law that expanded health coverage to millions. That was up four points from January, and it’s highest point since the monthly survey began in 2010. (KHN is an editorially independent program of the foundation.)

The survey found 40 percent of respondents were unaware that Congress in January repealed the individual mandate penalty as part of the federal tax overhaul. It takes effect in 2019. About one in five people were aware of the repeal but believed incorrectly that it had taken effect this year.

Only 13 percent of respondents were aware that both the requirement to buy insurance was repealed and that it remains in effect for 2018.

The public’s lack of knowledge about the individual mandate likely reflects the fact that few people are affected by it. The majority of Americans have health coverage or are exempt from the mandate because their income is too low, said Ashley Kirzinger, a Kaiser polling expert.

“Confusion over the status of the ACA’s individual mandate stems from a lot of different things, but health care policy is complicated and the public generally doesn’t pay attention to details of health policy until it directly impacts them,” she said.

The poll showed the public is also split on what’s motivating states to add a work requirement to Medicaid.

About 41 percent of those surveyed said states were looking to lower government spending while 33 percent believed states were enacting the new requirements to “lift people out of poverty.”

The Trump administration in February approved requests from Indiana and Kentucky to require some non-disabled adults to work as a condition of having Medicaid coverage. At least eight more states are waiting for a green light.

About two-thirds of Americans said states should not put time limits on how long people can be enrolled in Medicaid as long as they qualify, the poll found. Support for lifetime caps was stronger among Republicans (51 percent) than Democrats (16 percent).

People | ACA’s popularity grows, even as GOP lauds change to requirement to have coverage